Getting Drunk With Video Games

In honor of St Patrick’s Day, we pay tribute to the role booze has played in video games. From drunked squirrels to mead-chugging Dragon Born, here are some of the virtual lives that have nearly been ruined by the Devil in a bottle.

A nuclear apocalypse happens and it seems to have forced everyone to plummet into the dark hole of addiction. Wander around the wastelands in Fallout 3 or New Vegas you’ll surely bump into someone who’s had one too many. If your character fancies a quick pick-me-up then why not dabble in vodka, beer or check what else the bars around the Mojave strip have to offer. Taking on a gang of super mutants or raiders? Polish off a couple of beers and watch your strength stat rocket sky high, whilst your intelligence plummets to the IQ of a radroach. Fallout can also stand as a great educational tool. Play through hardcore mode and your character gets thirsty. Only water and soft drinks will quench your thirst, whilst beer only dehydrates you further. Remember that, kids! 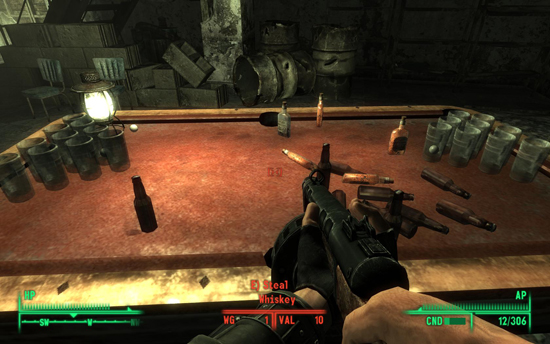 Bethesda seems to like the role alcohol plays in most of their titles, and Skyrim is no exception. It has to have the largest selection of intoxicating beverages on offer out of any video game, and the effect of mass alcoholism are immediately apparent from most of the people you meet. The taverns in Skyrim house some very broken souls. People have given Gin the title of “Mothers ruin”, when it’s apparent that the true culprit is Nord Mead. A drinking contest with a nice chap called Sam Guevenne soon turns into a quest after h and your character travel to a place where “the wine floats like water”.  You’re woken up by a disgruntled women and it’s apparent that for some reason, your bed was the temple floor. A wedding is mentioned, you’ve done something with a goat, and to top everything off, you’ve blasphemed the statues in the temple by excessively fondling them. Better make a swift exit then.

As well as a phone bill that’s probably sky high, Roman from Grand Theft Auto has a personality that’s very addictive. “Hey Niko, how about we go bowling?” Not right now buddy, it’s 3am in the morning. I also don’t see why you feel the need to ask me after I declined your invitation to go bowling just ten minutes ago. “Niko, let’s play pool!” Again, Roman; no thanks. I’ll pass on that opportunity this time, just like I passed up on your fifteen previous invitations, which coincidentally, have all been today. Maybe if you quit your drinking habit you would find something better to do than ring me every minute and extend crap invitations to me. You’d think he’d get the hint.

If you played Lost Odyssey for the Xbox 360 then you’ll remember Jansen. Jansen is best described as the bastard love child of Jonny Bravo and a drunken Commander Sheppard. He likes the girls and he likes to party. Jansen clearly doesn’t care much for first impressions, staggering out from a bath house with three girls around his arms whilst still being completely tanked. Not caring much for the adventure he’s about to embark on, Jansen’s more bothered about finishing business with the girls he’s left. “Hey, can I have just fifteen more minutes! Fifteen for﻿ her, her, and her, uhh that's forty five minutes!" 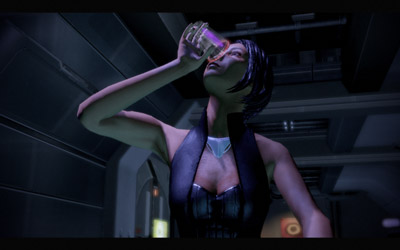 The award for the best use of alcohol in any video game has to go to Conker in Conker's Bad Fur Day. Why? Because the entire game is based around the drunken exploits of a loveable squirrel. I say loveable, but in retrospect he’s a struggling alcoholic who, by the end of the game, loses the love of his life due to the consequences of a heavy night out. Just like the newest Duke Nukem has a dedicated button to hammering beers; CBFD has puzzles and enemies that can only be passed by getting absolutely tanked. How do you defeat imps that are made of fire? The simple answer is to drink beers, get drunk and then urinate on them. Stuck in a night club full of cave men and need people to move out the way? Once again, drinking so much you need to publically urinate solves the problem as your obstructions move aside. Drinking normally doesn’t solve problems, but in the case of CBFD, it seems to solve almost every problem there is.