When I first heard about this book at Wonder Con, I have to admit I thought it was stupid. The idea and title are still stupid, but you can’t judge a book by its cover. So I didn’t. Gangsters & Goliaths is not only a great Godzilla story, but it also manages to be a good human story. Everyone knows that humans are just added to the monster genre so that the viewer will have someone to relate to as the monsters destroy everything. They’re rarely interesting and usually it’s the same thing over and over again, except for Godzilla: Final Wars.

That is where G&G excels, in that for once the monsters are not the catalyst for the story. In fact they hardly appear in the story that takes place mostly on Monster Island. We open with Detective Sato washing upon the shore of the Island. He’s quick to his feet as the Triad gang members that have kidnapped him are now shooting at him. They seem to have made a critical error in allowing him to swim to shore, thinking that it would take the fight out of him… it didn’t. He begins to hide in the jungle as the gangsters spread out looking for him. Eventually everyone runs into Godzilla the King of the Monsters and the one of the gangsters opens fire on his foot. It’s a mistake that is not soon repeated as Godzilla fires back at the minor annoyance killing everyone except Detective Sota, who is rescued by Mothra. 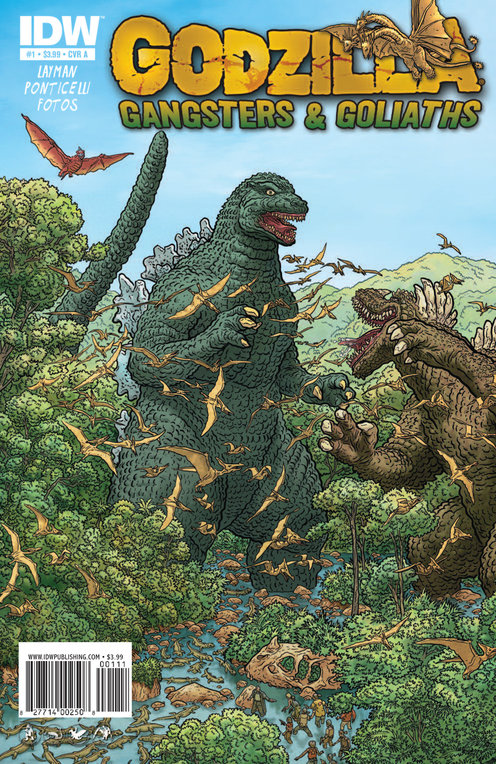 The story has an interesting narrative as it jumps back and forth from the past to the present, usually triggered by dialog from one of the characters. It gives it a heist movie feel when it does this, but it works really well to progress the story forward and keep everything interesting. John Layman (Chew) keeps the pacing interesting and the world believable. Even as Detective Sota makes a horrible decision it doesn’t feel out of character or even forced. It feels organic in the way the story has been unfolding. Layman also does a great job of using a lot of the monsters and elements from the Godzilla movies, but not in a campy homage way. He uses them very seriously as the movies try to do.

The art is insane! The amount of details on everything makes it the book really come to life. I’m not just referring to the overly detailed cover by Geof Darrow, but also the intense pencils of Alberto Ponticelli on the interior art. Ponticelli does a great job of keeping everything in proportion, which is extremely important when doing a monster book of this size (cue the cymbal). He also spares no detail on the humans in the story and gives all the characters distinguished looks, which in a way makes them a bit over the top, but it works with the story.

I wasn’t sure how this first mini-series starring the King of the Monsters was going to stack up, but it’s very worthy of the Godzilla name. It’s in a very different world from the ongoing series, but the setting it’s in is both familiar and amazing on its own. If you’re into Godzilla then you probably pre-ordered the book, but if you’re into John Layman’s writing then you’ll really enjoy his take on Godzilla.