In Afghanistan, a small poppy field gets dumped on by a strange pesticide carried by a small flight of planes. Just outside of the field, a small army U.S outpost F.A.C Alamo receives a visitor in the form of a suicide bomber. After a quick disagreement between the two Marines holding the line, the Corporal Reddick takes the shot killing the bomber. In moments, E.O.D (Explosive Ordnance Disposal) opens the bomber’s stomach to expose a bomb, a bar of semtex. As the explosive is disarmed the locals start to gather around as one local man begins to explain that the body has to be buried as soon as possible, and then he slips one of the G.I.s some drugs.  As the day runs into the night the troops are forced awake by the attack of a Taliban mortal strike.  As the soldiers return machine gun fire, C.O. Kim calls for air support.  In moments three Apaches fill the skies and bailed out base camp Alamo.

The next day Lt. Vasquez shows up to take control of the base and concocts a plan to trace the origins of the bomb back to the Taliban. Vasquez takes a small unit of follows observe the suicide bomber’s funeral in hopes to get the man supplying the explosives. Disappointed, the patrol heads back but not before they trip an E.O.D in the middle of the field, causing the patrol to experience wounded and casualties.  Next, they check in with the local doctor to discover that he has a stock pile of bomb making supplies. Not only that, he was the one that was implanting the bombs into the terrorist.  After that, Lt. Vasquez tries to approach the local leader explaining the mistake in keeping the suicide bombers body and that he is keeping their doctor. He explains that if any locals need medical aid that his unit will take care of them.  But when all is said and done two more Marines are killed in terrorist gunfire. 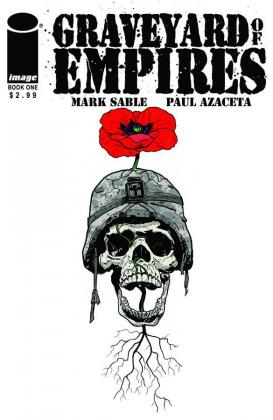 Feed up with the reckless and lack of compassion from Lt. Vasquez, Reddick confronts him by pulling his side arm on him and attempts to relive him from command, the easy way. From outside the base shots ring out and what seems to be another suicide bomber lies outside the gate. As one of the Marines go to inspect the body, it lunges up to bite his shoulder.  Sure shot Reddick puts the attacker down from the watch tower and turns towards the fields surrounding the base to see a horde of the undead making their way towards them.

First off, Mark Sable (Two-Face: Year One) knows his military lingo. The dialog between the Marines was impressive. The way their daily life was done also deserves a tip of the old hat. Paul Azaceta (Talent) was once again a real treat. But that’s where things end on a good note.  Graveyard of Empires #1 had the potential to be a really kick-ass military book but then it goes off and decides it wants to be a Hurt Locker, The Walking Dead hybrid. This sucks because the military aspect side of story was so well done.  Where ’68 comes off more as a horror book that happens to be told within a militarily setting; Graveyard comes off like a military story that just happens to have some zombies show up. It’s still too early to say what direction Graveyard is going to take, so it’s ultimate fate will be reserved until then, but for now it got a long way to go.