Green Arrow #17 – Review: Lost Is Over. Please, Don’t Make Me Go Back to the Island. 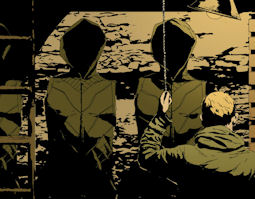 Jeff Lemire and Andrea Sorrentino ruthlessly burn the house down and start the process of building something else for Green Arrow. But it’s hard to say whether the new house is going to be any better constructed than the old unfortunate one. It’s not a return to the old Green Arrow. It’s also not a complete dash toward what the CW is doing with the character in Arrow. It’s something... different.

Here’s the thing. Green Arrow was quite possibly the greatest disaster of the New 52. I’m not sure what other series so badly revamped a character or team that it could compete with what Green Arrow did to Oliver Queen. Sure, Savage Hawkman did its lead character no favors, but how often has Hawkman ever really been in a good place? A case could be made for the ill-conceived Justice League International, though. But one of the things that was so disastrous about Green Arrow was that Oliver Queen was arguably the DC character who needed a New 52 revamp the least. Writers like Kevin Smith and Judd Winick had already succeeded at making him one of the more modern and relevant characters around. They portrayed Ollie as a loudmouthed liberal with a recovering drug addict for an adopted son, an illegitimate mixed race son and a HIV positive sidekick who used to be a prostitute. Now, this did get diluted by an editorially driven marriage to Black Canary and a relaunch that hit you in the face with Robin Hood references and a deus ex machina in the force of a magical forest. But that was all easily fixable.

Suddenly, the formerly relevant Oliver Queen became a lesser Tony Stark with his own technology company and gadgets. It was all trick arrows, Apple parodies and popcorn superhero antics. And no one would accuse this Ollie of having one of the more strongly distinct personalities in the DC Universe. Still, DC stuck with this status quo for over a year before bringing in Lemire to destroy it and try something else.

And here we are. While I’m more than happy to see the old status quo go, I have to say that there are far more interesting ways to go about it than what Lemire has chosen. He straight up just starts killing and destroying everything, and that’s rather disappointing. The downfall of Oliver Queen as a rich playboy and well-funded superhero should be a damn good story in and of itself. It’s a perfect fall from grace story. What could be more relevant than a hero from the 1% being kicked down into the 99%? It’s great stuff that Lemire unfortunately skips past to get on with the mythology-building he would rather do.

It’s also that island-related mythology that worries me about where Green Arrow is headed. Lemire alludes to some deeper meaning to the island Ollie was stranded on and Ollie’s father without giving away what that might be. My concern is that we are about to enter into Lost territory. I’m usually not a big fan of writer’s deciding to reveal so-called deeper meanings to major elements of characters’ past. Personally, I think it’s more meaningful that Bruce Wayne’s parents died in a random mugging and that Krypton was destroyed in a natural disaster. Reaching for some kind of convoluted secret history tends to just dilute the event and make it seem hokey. I worry about this happening to Ollie. I don’t care to see destiny and conspiracy get mixed up into his origin story.

Komodo looks to be our new main Green Arrow villain for the foreseeable future. He’s responsible for destroying just about every part of Ollie’s life in this issue, so for that. I’m grateful to Komodo. Unfortunately, I’m not that impressed by him. Now, maybe what I’m about to say is harsh. And Lemire certainly isn’t the only Green Arrow writer to go this route. But really, an evil archer dressed in mostly black is probably the least creative thing you could possibly come up with for a Green Arrow villain. This is even more true when we already have a character fitting this description around in the form of Merlyn, making the idea both uncreative and redundant. I’m not writing off Komodo completely. It’s just not a great debut for a new villain.

One thing I’ve relieved to see is that DC isn’t running toward Arrow in their attempt to salvage this book. Don’t get me wrong. I enjoy the show. Sure, its villains of the week usually suck. But the rest of it is pretty interesting. It just wouldn’t suit Green Arrow in the DC Universe. There are some changes to the atmosphere that are similar to the show, such as making Ollie more grounded and creating more of an emphasis on his time on the island. But that’s slight and not too similar to the show.

Sorrentino’s cover is awesome, but I can’t say the same about the interior art. It looks like Sorrentino is doing everything from the line art to the coloring, and that’s just not working well. This book would benefit from getting a separate inker and colorist, because the coloring here is just destroying the art. Faces are constantly getting distorted and washed out, and on top of that, the colors are rather flat in general. I will say that Sorrentino is doing some interesting things with layouts and action. But the lack of a strong inker and colorist hurts the whole effect.

The old status quo of Green Arrow is gone, and that is an automatic improvement for the series even if it is accomplished in a kind of cheap and dirty way. However, it remains to be seen if the incoming status quo will actually be much better. This isn’t a return to the elements that used to work well for Oliver Queen. It’s the introduction of a new island-oriented mythology that could prove as overbearing as the previous “CEO obsessed with trick arrows” one. There’s definitely reason to be optimistic about Lemire’s takeover of Green Arrow, but that optimism has to be cautious.