So the second issues of the relaunch keep rolling in, and they haven’t disappointed yet. Hal may have started this new series without his powers, but I think it’s safe to say most readers didn’t expect that to be the case for long. Green Lantern #1 ended with Sinestro talking to Hal about getting his power ring back. Issue #2 starts with Hal understandably feeling very uneasy about the “former” villain offering “help”.  After a short but heated discussion between the two, Sinestro gives Hal a Green ring of his own making.

Yeah, Hal is back as a Green Lantern. Kind of. Since the power ring was made by Sinestro, he obviously included some fail safes before giving it to his old enemy. Apparently Hal didn’t think that far, and attempts to attack Sinestro with a blast. The attack has no effect, and Sinestro demonstrates how he can shut off the ring’s power at any time. A few power demonstrations later, and Hal learns why Sinestro is giving him his powers back. I won’t say anything specific, but it was enough to get me exciting for this upcoming arc. 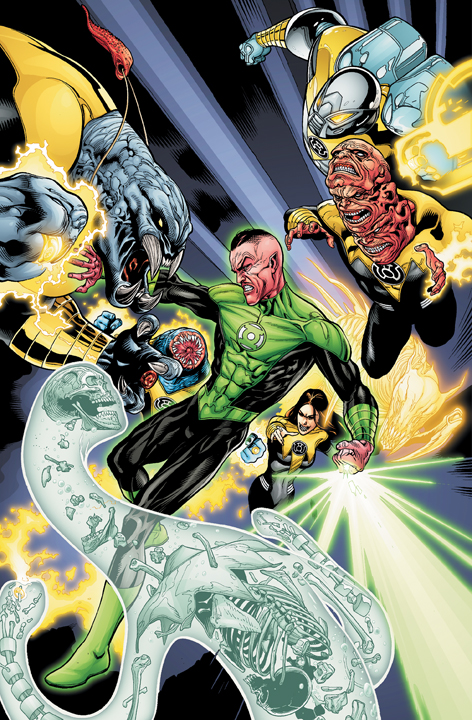 At this point it seems a little redundant to bring up how good Geoff Johns is at writing Green Lantern. He’s the architect of the book’s entire modern universe, and he’s had time shaping these characters and knows how to write them. The interactions between Sinestro and Hal are as you would expect, tense and sometimes pretty funny. Doug Mahnke’s pencils are back or the second issue and they’re just as good as they’ve always been. Again, these two know what they’re doing, and their readers are well aware of that.

The prospect of having Sinestro and Hal team up for a while is an interesting one. I’m sure there will be a lot of readers wondering how long Sinestro can stay on the good side, and I’m right there with them. I definitely see him staying Green for a decent amount of time, but we’ll have to keep reading to be sure. Thankfully, the series remains great, so keeping interested shouldn’t be hard in the slightest.