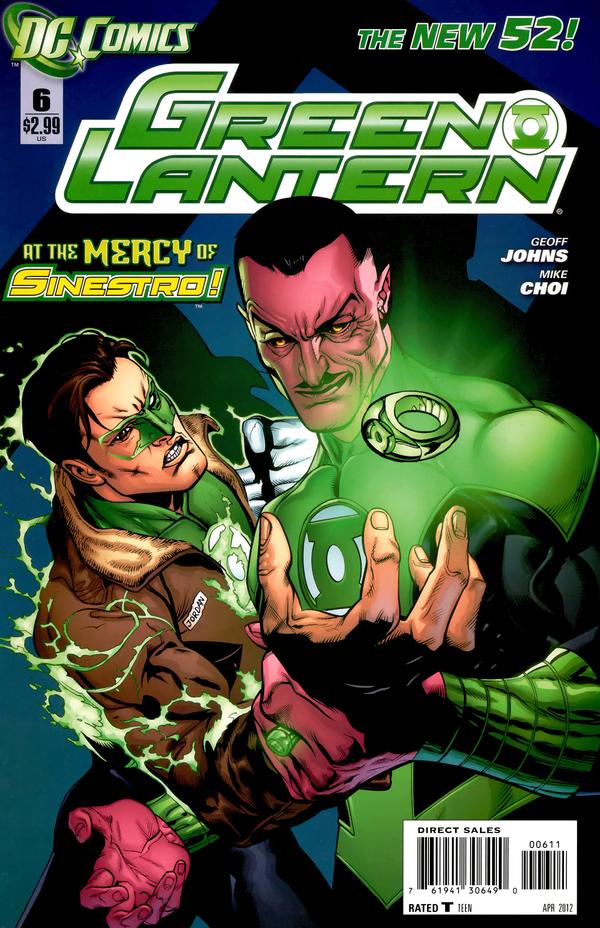 Green Lantern has been one of my favorite series from the Dc Reboot because it is one of the only titles that has not changed during the transition to the Dc Reboot from the old Dc Universe. This series continues right from the last series without skipping a beat.

In this issue we see Hal Jordan try to get use to life without being a Green Lantern and try to be with Carol all at the same time. In the mean time we see Sinestro encounters a woman who holds the Book and Black. She shows Sinestro a horrible future and Sinestro knows he is in over his head. So, he asks Hal Jordan for help.

I was excited for this issue because the cover really looked great. I was expecting to see Hal really slow down and take things easy for a little while, but as we saw in this cover Sinestro will not make this possible for Hal. I also really loved the art for the cover. It was very different from the interior art because there was a guest artist, Mike Choi, who worked on this issue’s art.

In this issue I liked to see Hal finally take things easy. It is very rare for Hal to just be Hal for a little while because he is always having adventures with being Green Lantern. It is nice to see him with Carol and just seeing him have the day off. In this issue we also get to see Sinestro see a horrible future. Which probably will be the main story for the next couple of issues. I am excited to see how that whole story will play out in future issues.

Even though there were some good things in the issue I still felt like this was a big filler issue. Not much happened in the issue. If you skipped this issue it would not really affect the story. I expected more from Hal and Carol, but we did not see them hang out that much and when they did hang out I really did not see a connection between them as we usually do, which is sad because I know I will not see them together for a while since a new story arc is starting soon. It was also sad that Hal became Green Lantern again so quickly. Why did Sinestro let Hal quit being Green Lantern if in the next issue we are just going to see him as Green Lantern again?