As you may know, Parallax is one of the main villains of the new Green Lantern movie. What you may not know, is that the character actually started out as Hal Jordan himself. Internal struggle isn't even the half of it.

In the 1994 arc Emerald Twilight, the villain Mongul completely decimates Coast City, the home town of Hal Jordan. This rubbed Hal the wrong way, and in his desperation he recreated the entire city through his power ring, right down to the slain citizens. The Guardians watched as Hal used the ring for his own personal gain and they descended upon him, demanding he put an end to his selfishness. This only added fuel to his fire and Hal made his way to the world of Oa and destroyed the entire Corps save for Ganthet, and he took their rings for himself. The greatest Green Lantern of all time was now the unstoppable villain Parallax. 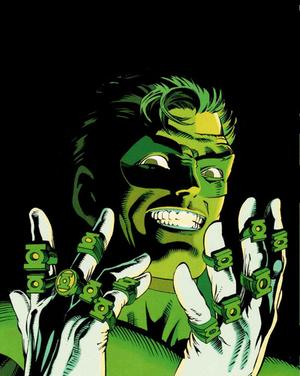 Though driven insane from grief, Hal’s original spirit still had a relative amount of control over himself. In the event The Final Night, Parallax sacrifices himself in order to reignite the sun. Hal’s body is preserved, and his soul is actually merged with The Spectre, essentially God’s right hand man who isn’t named Jesus.

It would be another ten years until the origins of Parallax would be revealed. In Green Lantern: Rebirth, writer Geoff Johns explains that Parallax is actually a parasitic entity as old as time itself and born out of fear, revealed to be the yellow of the emotional spectrum. The Guardians had imprisoned him within the Central Power Battery on Oa, the place where all Green rings get their power. When Sinestro was imprisoned inside the Battery as well, his yellow ring awakened the sleeping entity. It had waited billions of years and saw its chance to escape in the new recruit, Hal Jordan. It is said that Parallax had influenced much of Hal’s life, filling him with self-doubt until the time came to fully absorb the hero. 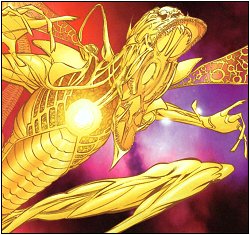 Parallax went on to use others as hosts, like Hal’s successor Kyle Rayner, as well as The Flash himself, Barry Allen. I know what you’re thinking. “But wait, I thought Hal Jordan is fighting Parallax in this movie, not turning in to him??” Yeah, I’m sort of lost as well. To be fair, even though Parallax started out just being the bad guy name of Jordan, at least it ends up being a separate being. If you’re also wondering why every hard-to-imagine and other worldly creature needs to be turned into a smoke monster (see Galactus from FF: Rise of the Silver Surfer), you’re on your own.