Today Sinestro is better known as the creator and leader of the Sinestro Corp, the Yellow Lanterns that use fear as the source of their powers. In Blackest Night, Sinestro also became for a brief moment the first White Lantern. But that is what fans of Geoff Johns' run on Green Lartern might know. The true genesis of this character was born a long time ago in a galaxy far, far away. Sinestro was born on planet Korugar, what Green Lanterns called space sector 1417. He is the brother in law of Abin Sur (the Green Lantern that died and gave Hal Jordan his ring) Sinestro became a Green Lantern before becoming a villain. In a similar way to Hal Jordan's GL origin, on one ordinary day on the planet Korugar, a Green Lantern named Prohl Gosgotha crash-landed there fatally injured he gave his ring to Sinestro; just in time for Sinestro to defend himself from the Lantern's attacker (a Weaponer of Qward). Sinestro defeats the Qwardian. Turns out that Gosgotha was still alive and asked Siniestro for his ring back. This could've help Gosgotha to stabilize his vitals long enough for him to get help, but knowing this would mean he'd have to give up being a Green Lantern Sinestro instead allowed him to die and took over sector 1417. The Guardians of Oa were of course unaware of his actions.

His fixation on maintaining order earned him respect with the Corps and was considered by his peers as the greatest Green Lantern of all time. As the years passed, he had grown weary of simply protecting his sector.  He wanted to preserve order on his home planet. The best way he could accomplish this, was to rule Korugar no matter the cost. 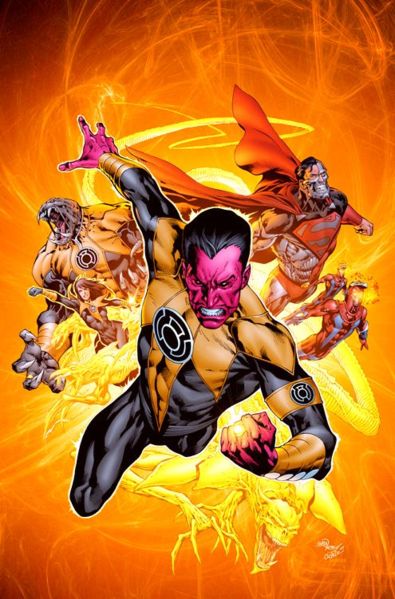 Sinestro was then assigned to be Hal Jordan's instructor. Jordan was shocked by his mentor's fascist ways, Sinestro thought that his way was necessary to protect his planet from any threats. During his training, Jordan helped Sinestro stop a invasion on Korugar. When Jordan called the other Green Lanterns for help, Sinestro's dictatorship was exposed. He stood trial before the Guardians. Sinestro's actions on Korugar had made the Green Lantern's symbol an emblem of terror and oppression. For using his ring to spread fear, the Guardians banished Sinestro to the anti-matter universe, you know: a place opposite to our universe.  Sinestro discovered Qward, the place that spawned the first alien he fought with his ring.

This world was ruled by warriors and scientists known for their vicious hatred of the Guardians and all Green Lanterns. The Guardians thought that this ironic situatiation could humble Sinestro. They were absolutely wrong. Now wronged by his former masters, Sinestro's hatred was focus towards the Gardians' direction. Sinestro and the Qwardians became allies, with them offering to help Siniestro create a yellow power ring and escaped the anti-matter universe. After that Sinestro became the Green Lantern's most powerful enemy. Mostly because the color yellow was a weakness in the GL's power rings. (now we know that the color was not really a weakness but the power of fear that it represented). Despite this, Sinestro's revenge attempts were stop by the Green Lanterns especially one Hal Jordan. He was imprisoned with thousands of other criminals on Oa. Sinestro then managed to escape this time with a more evil plan. Returning with almost infinite powers, Sinestro destroyed an entire star system, until he was finally stop by the Green Lantern Corps of Earth. 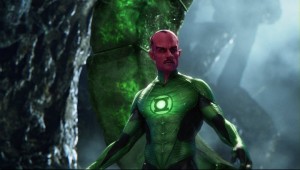 Now guilty of multiple acts of super genocide, he was put on trial again. Finding him guilty, they sentenced  him to death and executed him. Yet Sinestro managed to cheat death (because nobody dies in comics except Uncle Ben). Sinestro sent his essence into the Central Power Battery and shut it down. While in the Battery, he also made a startling discovery about the ancient weakness to yellow, within the Green Lanterns' light: Parallax. Sinestro then did some manipulations so that Parallax could infect Jordan's mind, which it did. This caused for Hal Jordan to become a bigger villian than him. Siniestro then waited and laughed as he finally got his revenge and made another great Green Lantern into a monster.

But things could not be like that forever and Hal Jordan became a hero again after we discovered that all that time he was being possessed by Parallax. Sinestro too came back as a villain and created the Sinestro Corps destroying and killing millions in the process. 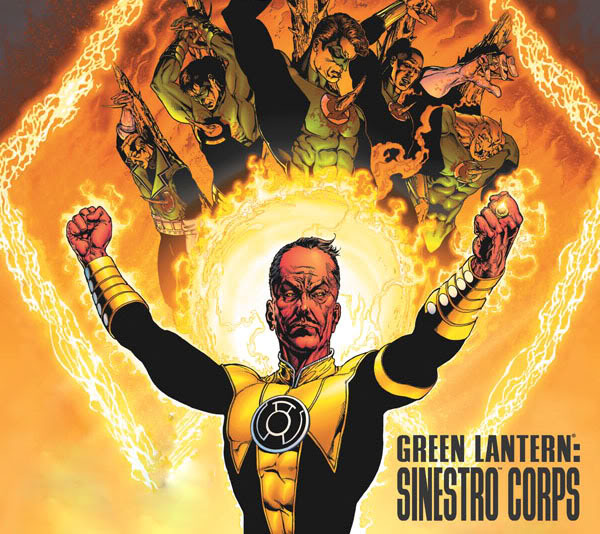 After all this time Sinestro continues to do what he does best: being pure evil. He is one of the key characters in Geoff Johns' Green Lantern run since Green Lantern: Rebirth. But what you really need to know is that every hero has a main arch-enemy like:  Batman has the Joker, Superman has Lex Luthor, Captain America has the Red Skull, Fantastic Four has Doctor Doom and Hal Jordan... has Sinestro. This means that every time Sinestro is in the book, horrible and despicable bad things will happen, but you'll enjoy every minute of it.