With the upcoming summer movie a lot of people are going to be asking, “What’s that bird-fish looking dude’s deal?” So here we are with another Character Affinity featuring everyone’s favorite Xudarian Scientist... Tomar-Re.

The first thing you should probably know is that Tomar-Re doesn’t play a major role in the Green Lantern Universe. Created by John Boome and Gil Kane, he made his first appearance in Green Lantern #6 as the first Corps member to meet Hal Jordon. Jordon had recently replaced the deceased Abin Sur, who was a good friend of Tomar-Re’s and Sinestro’s. Even though he wasn’t a major player in the GL Corps, Tomar-Re still played a key role in several major DC storylines and also Green Lantern story lines as well.

I Could Have Saved Krypton 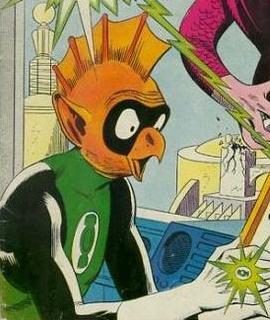 One of the major storylines that Tomar-Re played a part in was the destruction of Krypton. Tomar-Re had discovered that the planet was on the verge of exploding and found a material that he believed would stabilize the planet. On his way to save the planet he was blinded by a yellow solar flare which caused him to drop most of the material and arrive to Krypton too late to save it. His vision returns just in time to see the planet destroyed from within.

I Kept Hal Jordon In The Corps

Not only did Tomar-Re go up against Nekron pre-Blackest Night, but he also went up against the Anti-Monitor as well. Working with John Stewart, the current Guardian of sector 2814, he was able to help defeat Goldface (the worst named villain ever). He then gives John his ring which forces Johns own, to recruit Hal Jordon once again for the Corps.

Yeah, I Did That Too

Tomar-Re helped in the investigation that would lead to Sinestro being kicked out of the Corps for abuse of power. He also became a member of the Honor Guard and trained notable Corps members like Arisia and rose from the dead in Blackest Night to try and munch on the Lanterns. Ironic that character that once single handily defeated Nekron, then became his puppet.

This summer you’ll find Tomar-Re voiced by Geoffrey Rush in the Green Lantern movie and probably playing a much more significant role in the film than he ever did in the comics… until the reboot that is.