By: Justin Moody | Movie News | July 27, 2010
Just because Comic Con is over doesn't mean that we have to wait a while to see anything big from next year's anticipated blockbusters. Warner Bros. has released four new character posters (that fit together) for Green Lantern featuring Hal Jordan (Ryan Reynolds), Carol Ferris (Blake Lively), Sinestro (Mark Strong) and Hector Hammond (Peter Sarsgaard). In addition to the faces, the posters, all together, contain part of the Green Lantern oath, which ought to get any fanboy giddy.

It's not totally surprising that the campaign begins now for Green Lantern. DC's Geoff Johns made it very clear that Green Lantern's success will single-handedly determine the future of the DC universe as far as films go (much like Marvel used Iron Man as a litmus test). So if you have any interest in seeing some of your favorite DC characters fast-tracked to the silver screen (The Flash, Wonder Woman, etc.) culminating in a Justice League film, then you will join me on my crusade to get everyone in the actual universe to see Green Lantern next June. Marvel characters have always suited my tastes a bit better, but the future of superhero movies beyond 2012 is uncertain (at the moment) and it would suck if DC kept getting stepped on.

Okay, back to present day and these fun posters. This is pretty typical contemporary superhero film marketing. I've always been a fan of the Green Lantern Corps. logo and they make good use of it here. I think these will excite non-comic fans and comic fans alike. First of all, if you know nothing of Green Lantern, I think these would still get your attention because the black and the neon feel suggest science fiction anyway. I hope the promo materials continue the black "space" theme and continue to focus on the fact that this is an intergalactic superhero story because that's what makes this particular hero and mythology so unique. Wise to stick with the human or human-looking characters for now, but it'll be interesting to see if all the many Green Lanterns get their own posters. 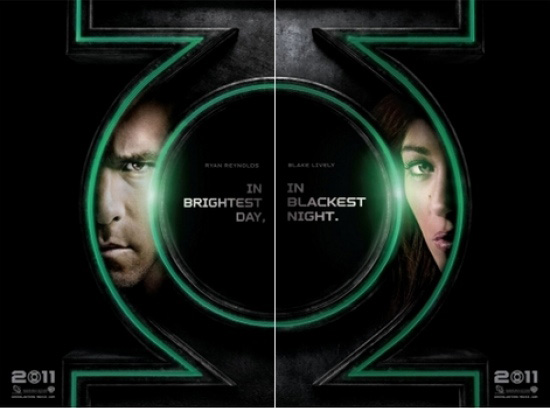 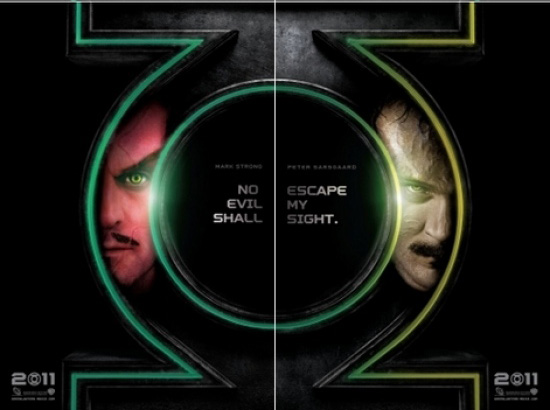