I haven’t read Green Lantern New Guardians since issue one, but with issue zero coming out I wanted to try reading this series again. I am a big fan of Carol Ferris, and I knew that this would be the first issue she was going to appear in as a new recurring character of the series.  So, I was actually pretty excited to pick up this issue zero.

The cover for this issue is great. It really catches your eye with all of the different corps on the cover. So, far the zero issues have had a lot of great covers even though they all have a similar background.

In this issue, Kyle visits Carol at Ferris Air. He tells her that Hal and Sinestro are fighting Black Hand at the cemetery. So, Carol put on her Star Sapphire ring to help Kyle look for Hal and Sinestro.

This was a great issue, and it didn’t disappoint. It started a great dynamic between Kyle and Carol. Even though they have never met each other we see that their personalities clash pretty well. I can’t wait to see their friendship build through out this series. It seems like this story will tie-in very well with the Third Army story arc coming up. In the end of the story we find out that the Guardians may not be the only people who are against the corps.

Another development in this story is when Carol is trying to find out if Hal took is lantern she finds an engagement ring in his locker. So, we find out that Hal wasn’t kidding when he said he wanted their relationship to be more serious. Finally we have a couple who might be getting married in the New 52 DC universe. Most of the couples in the New 52 never existed. So, it is nice change to see a couple that has struggled to stay together have fixed things up, and might even get married. She even proves her love to Hal in this issue when she took the ring to become Star Sapphire again. In Green Lantern we saw that she had no desire to be Star Sapphire, but when she finds out that Hal might be in trouble she doesn’t hesitate to put the ring on. 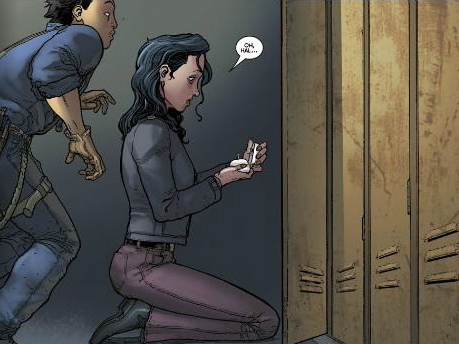 The art was probably the only problem I had with this issue. It was not as good as I usually see with these characters. There are a couple of panels were the characters made weird facial expressions, and Kyle’s mask looked really bulky. I did really like Carol’s news Star Sapphire costume though. I thought the new design fits her character very well.