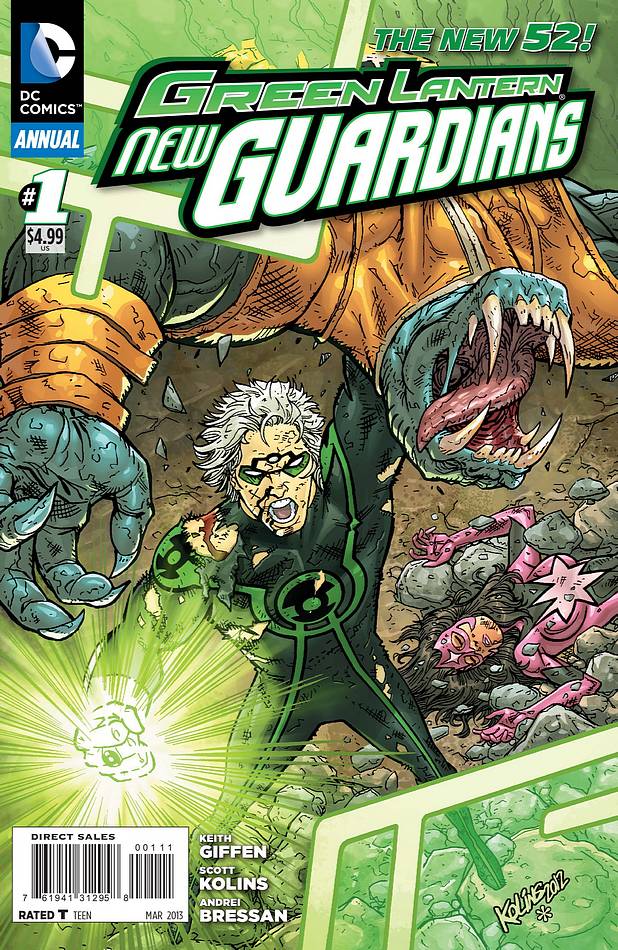 Even though I don’t think Green Lantern New Guardians is the best series out there I was still excited to read this annual. Since Green Lantern had a great annual a couple of months ago I thought this series would also have a good annual. I thought this could progress Kyle’s story and he would finally learn all of the powers of the lanterns.

The cover didn’t appeal to me. It was just a random Green Lantern on the cover. The art was very sketchy especially for cover art. So, this was not a good sign of what we were going to see for the interior art.

In the issue, Carol takes Kyle to Zamaron to teach him Love. But the Zamaron’s have a different mission for Carol as Kyle trains on Zamaron. Carol gets double-crossed and ends up on a Hunger Games type game show. Will she be able to escape?

I was expecting a lot of different things with this annual. I thought Kyle would finally get the power of all the rings, and Carol would teach him Love. Kyle Rayner was hardly in this issue. He is the main character but he was only in 2 pages of this double-sized issue. This story was mostly centered around Carol, which usually I wouldn’t mind since I like seeing more of her character.

The story was very confusing and all over the place. The mission that Carol had received was not clear. I didn’t know exactly what she was doing through out this issue. The writer just wanted her in this Hunger Games scenario, but had no idea how to do it. So, confusing us was the only way possible to tell this story and get away with Carol being on an alien television show.

The worst part was not just the poor development and story telling, but the worst thing was finding out that this Annual was made just to sell another comic book. In the end of the story it leaves the readers on a cliffhanger and tells us to pick up Threshold #1 next week. At that moment everything made sense to me. This is why we received a story that didn’t make sense because Carol had to be put in this situation to sell a new comic book. 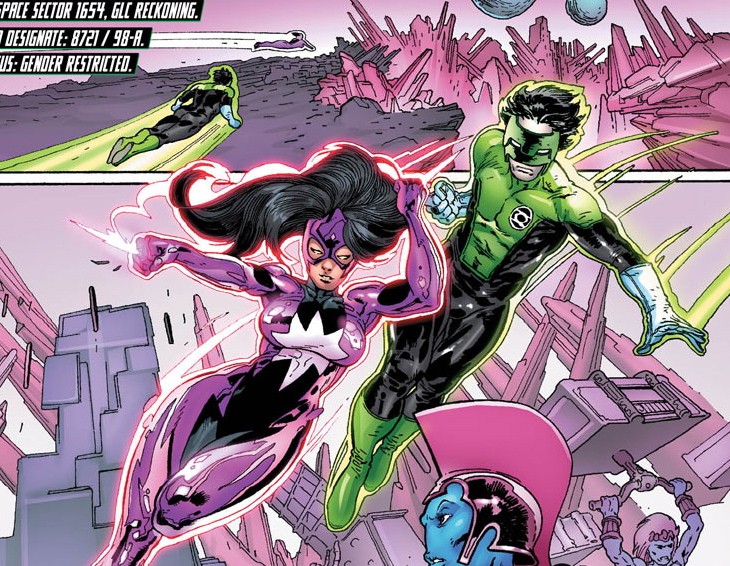 DC has been doing this lately with their latest Annual issues. They did the same thing with Teen Titans when they were trying to sell Ravagers, which also wasn’t a great series.

The art didn’t make anything better. Green Lantern New Guardians never had good art, but I could always look over it because they always had a pretty good story. But this issue lacked in story and art. The art was very sketchy and bulgy. It is actually the worst art I have seen in a while from a comic book. I am sure this style of art could fit other comics, but it did not fit Green Lantern New Guardians.

I wanted a good story with Kyle and Carol, but I get a publicity stunt. I hated that I spent five dollars on this issue. It is not worth the money and you will not a good story. Do not pick this up!