Recently Green Wake was picked up as a new ongoing series from Image and Shadowline and the reason is because it’s one of the best new series of the year. It’s definitely one of the best books being published from Image and company on a monthly base. The series shows that story and art are equally important in a series and that there should always be a fine balance between the two.

The third issue opens up with a flashback of the night before Morley came to Green Wake. He and his wife were spending time at a friend’s newly purchased farm house. It’s revealed that Morley and his wife Anna are expecting a baby right before they head home in the coming rain storm. Right after they make a detour to the big empty barn. We then see Ariel running from a clownish looking Green Waker, she heads into a church and is greeted by the blind Pastor. Morley and the crew are just behind her, but don’t know it. They chase after our clown as he disappears into the water. 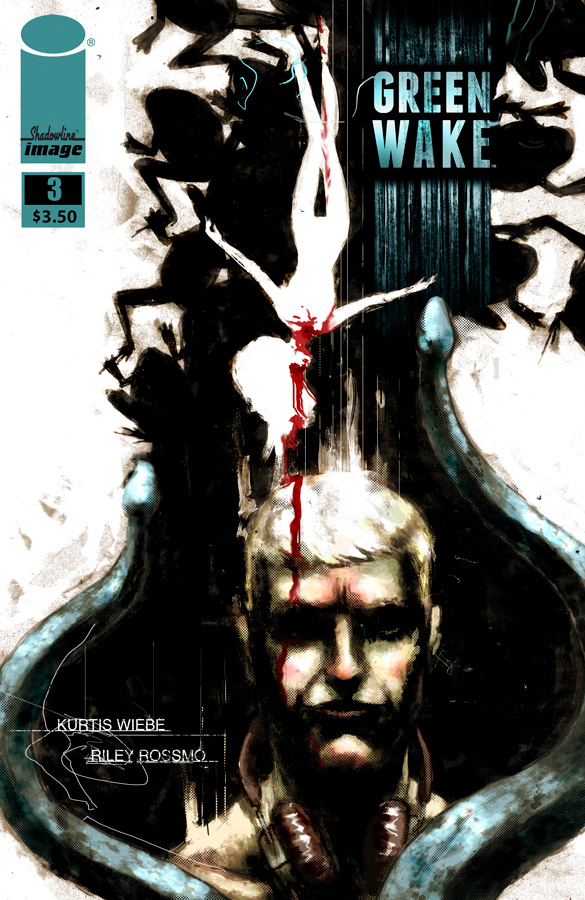 The story for this book is hard to describe since most of the issue is without dialog. It makes a powerful impression, but also leaves a lot of it for the reader to interrupt for themselves. My take on it is that Morley is dealing with the death of his wife and the fact that he caused it. After they make love in the barn he continues to be flirtatious with his wife on the drive home until he loses control of the car and hits a tree. The crash kills his wife and unborn child and leaves him relatively unharmed. Ariel on the other hand seems to be finding out more of how Green Wake works and joins what looks like a cult, or at the very least a group of like-minded individuals that may or may not know a way out of Green Wake. Regardless, there is something that Ariel knows that has her on someone’s hit list.

The great thing about Green Wake is that the world is very much a mystery. It’s unraveling before the reader’s eyes, but it’s a long journey that will have several reveals along the way. It’s the best way to tackle a mystery of this nature. The setting of the story is very powerful and gives it a noir feel. Everyone is wearing suits and ties and the story captures this weird hybrid era of the 40’s. Kurtis Wiebe should be commended for being a strong enough writer to let the artist tell the story and not fill each page with captions and dialog. The small amount of dialog in the issue is very powerful and captivating. I think that a lot of comic readers mistake the lack of dialog of a lack of writing or skill and it’s the far from the truth in comics. Wiebe trusts his artist to show his words and descriptions and allows him to guide us how he sees fit.

The art of Green Wake is also spectacular. It’s clearly water-colored and it makes each page a work of art in and of itself. Riley Rossmo is a fantastic artist and storyteller. He’s really one of the best in comics today. Rossmo takes this issue void of words and adds so much too it that you are able to feel the strong impression of the characters faces and reactions. The scenes in which Morley reflects on his past are so powerful that you can see the emotions he’s going through without a single word.

This book is a real treat to see in today’s comic market. It’s almost an art book, but with a very interesting compelling story. The world continues to grow and as it does the veil is pulled back a little more. The art is definitely some of the best in comics today and worth the price of admission alone. I can’t recommend this book enough as it is nearly a “silent” comic which is few and far between on the market. It’s not too late to get into this book, this issue might not be the best jumping on point but if you can find a second print of the first issue and a back issue of the second then you’re golden!