When we last left the mythical , the demon Orcus made a proposition to the townspeople of Tallus: he would leave their children unharmed if they deliver Sela and her companions, Bolder and Blake, to him at once. At this notion, the entire town surrounded the trio in a desperate attempt to save their family. Sela is well aware of the fact that she could decimate the entire city if she tried to use her powers and Blake is unable to use his sword for a similar though less explosive reason. Druanna shows up just in time and commands William to either see to Orcus’s terms or deny them. He then arrests Sela and the others, locking them away while he ponders the High Priestess’s words.

Writer James Patrick decided to feature some back story on the truly pathetic King William. It was a welcome addition to the story, since there hasn’t been much in the area of character development outside of Sela and her two friends (and even that has been lacking). William’s father, who preceded him on the throne, is seen warning a younger William that his foolish behavior will get in the way of his rule and that one day it will ruin him. Father apparently knew best, as Druanna busts through the jail cell holding Bolder and Blake, yelling that she’s Gaia and she’s pissed in probably the most exciting moment of the issue. Her powers are still limited though and Orcus’s army is still patiently waiting outside the city walls, ready to raid Tallus at any moment. The story does jump around a lot, rarely sticking with one subject for more than two pages. 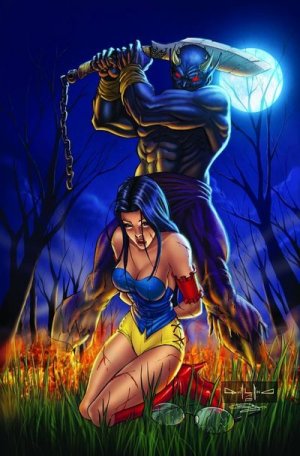 Aside from the jail break, there really wasn’t much else in the realm of action this issue. That’s fine, of course. I was glad that Patrick decided to focus more on development this time around. Swords and magic are great and all, but if you don’t care about who gets sliced it tends to fall flat. Though at one point, Sela has some weird vision involving monstrous hands ripping the clothes off of her pregnant (huh?) body. This was both an excuse to get her relatively naked, which the series often does and also to clearly foreshadow something in store for the heroine of Myst. 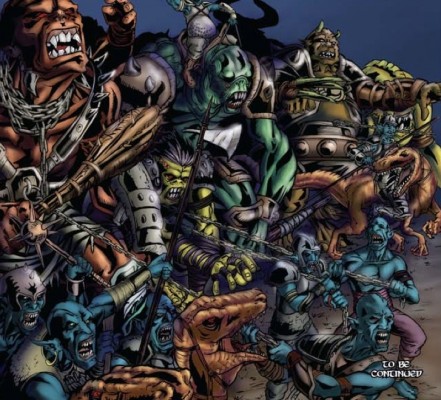 One thing that has been hit or miss throughout this comic’s run is its art. Carlos Granda’s pencils are dark and precise, fitting nicely with the gritty surroundings of Tallus. Sometimes the characters are just simply drawn badly. Most of the time, everyone kind of looks the same, male or female. The colors here are dull and don’t really pop. It’s unfortunate that a comic that has in the past focused so heavily on its visuals can’t seem to balance that focus with story.

Overall Score - 6.0/10
*This series is definitely gathering some steam and allowing its characters to flourish. Hopefully the art will catch up with it.*