Guardians of the Galaxy #1 – Review: Earth Needs One Hell of a Huge No Trespassing Sign 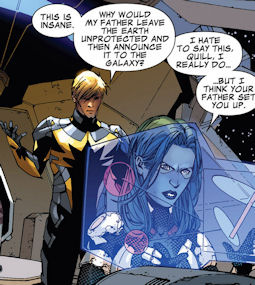 After a whole lot of promotion spanning several months, the new Guardians of the Galaxy has officially begun by the surprisingly high profile creative team of Brian Michael Bendis and Steve McNiven. Normally, that kind of A-list talent bodes well for a book, but this first issue leaves me feeling that they aren’t really bringing their A-game to it.

Bendis wisely doesn’t do much to try reinventing the wheel here. This is basically the same Guardians of the Galaxy team that we got from the Annihilation era of the cosmic franchise. Star-Lord, Rocket Raccoon, Drax, Gamora and Groot. It’s same core group for the most part, and Bendis seems to be keeping to the portrayals that Keith Giffen established. Yeah. I said Giffen rather than Dan Abnett and Andy Lanning, as Marvel always likes to credit. I know he works for the other company now, but he’s still the one who actually dusted all these characters off and made them great.

Star-Lord takes center stage in this opening issue as Bendis does something that really deviates from the previous portrayal of the character. He embraces Star-Lord’s backstory. This is something Giffen and DnA only touched on in broad strokes, if even that much. I never blamed them either. See, Star-Lord’s backstory isn’t great. He’s very much rooted in the campy science fiction of the Flash Gordon era. He’s the half-human prince of an alien world, whose people are all basically human too if you look at them. As far as science fiction goes, it’s not terribly unique or compelling. But Bendis has decided to go for it anyway. Given his track record, I’m willing to give him the benefit of the doubt. Maybe he can make something better out of it. The talk between Peter Quill and his alien king father is one of the better scenes of the issue.

The rest of the cast suffer a bit from a lack of attention, though. As I said, it definitely seems like Bendis is sticking to their most recent portrayals, but we don’t get much more from them than quick bullet points of who they are. Gamora is dangerous. Drax is badass. That raccoon has guns. And Groot is Groot. This isn’t a big deal for those of us already familiar with the characters, but this is meant to be a first issue. For truly new readers, there’s still a ways to go to introduce the cast.

Iron Man also joins the cast as an attempt to better tie Marvel’s foremost cosmic team to the rest of its publishing universe. I’m really not sold on this. It comes off as artificial. I don’t disagree with the idea of having an Avenger involved as a liason between the teams. That does make sense, but the way its carried out is a bit forced with Iron Man happening upon a Badoon attack that the Guardians are about to intercept. Also, I just find Iron Man to be a poor choice. Wouldn’t Captain Marvel be the more sensible candidate? She’s already a major Avenger who has one foot in the cosmic sphere, and Marvel is supposed to be trying to elevate her right now.

I like the new premise for the series than Bendis has established. The idea of Earth being proclaimed off limits to the major cosmic states has a lot of potential, and Bendis quickly shows why it could do more harm than good for Earth. They key for making this truly work rests with other books, though. If other books just ignore this by having Kree and Shi’ar show up like it’s nothing, that will just marginalize Guardians of the Galaxy as irrelevant. So while Bendis is doing what he can here, it’s up to Marvel’s editors to actually make this work.

McNiven really is a fantastic artist. His work is just so clean and appealing. He doesn’t have the problem that plagues some other high profile artists either where they have no concept of facial expressions or body language. There is one problem with McNiven’s art on Guardians of the Galaxy, though. The new character designs are dull. I recall him saying in an interview he didn’t find some of their former looks to be “scifi” enough, which honestly just implies a very narrow view of what “scifi” is. Variety was one of the best things Annihilation brought to Marvel’s cosmic characters. You had the ridiculous in Rocket Raccoon, the more standard scifi that McNiven prefers in Nova, a military and grounded style of scifi akin to Battlestar Galactica with Star-Lord, the more Starlin-esque fantasy kind of scifi with Gamora and Drax with his... casual scifi, I guess you could call it. McNiven has largely done away with all that, putting everyone in rather generic space armor with the biggest crime of all being the loss of Star-Lord’s awesome helmet.

Also, am I the only one who finds Iron Man’s space armor seriously ugly? McNiven probably doesn’t get blame for it, though. I’m not sure who actually designed it. But man. It’s rough.

Bendis and McNiven’s first issue of Guardians of the Galaxy isn’t likely to blow anyone away, but it does present a strong premise for the new series. Star-Lord, with his new emphasis on his campy backstory, surprisingly comes off well thanks to Bendis focusing more on the father/son relationship than anything else. However, the rest of the cast really could have used more attention. Someone also needs to get McNiven to broaden his perspective on science fiction so we can get some better character designs out of him than this.