Most people generally want their legacy to be something positive, like a hospital wing or a college scholarship. Of course Jason Bourne is best known for putting people in the hospital (and he killed a guy called The Professor), it seems as if his actions have left a wake of destruction even in his absence, as the newest trailer for The Bourne Legacy goes to show. Bourne is literally imprinted all over this trailer, and it's going a long way to prove that Robert Ludlum's spies and assassins universe doesn't begin and end with Matt Damon.

Seeming to run concurrently and passed the events of the last film, Bourne's exposée on the assassin-factory known as Treadstone at the end of The Bourne Ultimatum appears to have forced nefarious higher-ups to shutdown the program and fire it's employees. Well, not so much "fire" as violently murder, begging the question of who it is you call when you need to assassinate your own assassins. 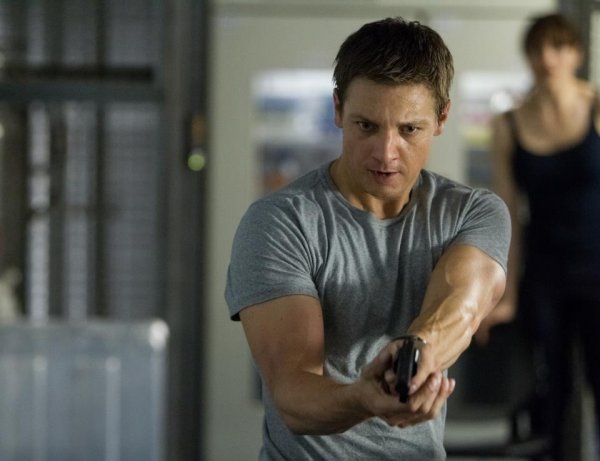 Among those leaving Treadstone's payroll is new lead Jeremy Renner as Aaron Cross; it looks like we'll be exploring the more-super-than-usual soldier's career, both as the program's top asset and now its biggest target. A newly unemployed Treadstone scientist played by Rachel Weisz, whom Cross is intent on protecting, claims that a few tweaks to his DNA make him unlike anyone else in the program, so it's a shame they already killed off established mutant-hater Brian Cox.

As for the returning players, we get only glimpses of Joan Allen and David Strathairn. There's also a greying Edward Norton getting some room to stretch and stress out as the new older white guy tasked with finding Cross by ordering around surveillance techies. But between all the plot points are more snippets of Tony Gilroy's cleanly choreographed action scenes to oggle, such as a laboratory shoot-out, or Renner and Weisz grinding…on a motorcycle while being pursued by thugs, in another entry to the series' famed chase scenes. You can see the trailer as a bumper before this weekend's Snow White & the Huntsman, or watch it embed just a few inches below. We'll find out just how successful Universal's sidequel science project is when The Bourne Legacy arrives on August 3rd.