The thing about Hack/Slash is that you don't have to take this book seriously. It is always a fun ride for those of us who dig 80's slasher films. This issue we see a couple of dead people, like always, right? Nah, in this book we see the return of Bobby or the walking-dead-pet-cemetery-guy (as I like to call him). As previously shown, this means bad news for Lisa as Bobby has a bone to pick with her. Unaware that Bobby's returned, Lisa takes a shower alone (no pooch allowed) to relax from her pregnant condition -- oh! That's right... I forgot to tell you this is a spoiler alert! If you read this far and did not want to read any spoilers for the issue, go to the nearest wall and bang your head until you lay on the floor thinking of Cassie's super short sexy skirt.

Now... As Bobby tries to drown poor old Lisa, he is interrupted by Samhain, one of the coolest characters this book ever gave us (besides Cassie and her sweet super sexy short skirts). Most of the Hack/Slash gang are pretty much on their way to save Lisa, but are either too far or are attacked by zombie-deers -- yes, zombie-deers. Also in the book Cassie and Vlad decided on no more friends, no more putting them in danger, no more risking innocent lives and only the two of them from this point on. At the end of the book a sexy vixen re-appears in the back seat of Cassie and Vlad's car and tempts Vlad with an offer of pleasure over Cassie's friendship. 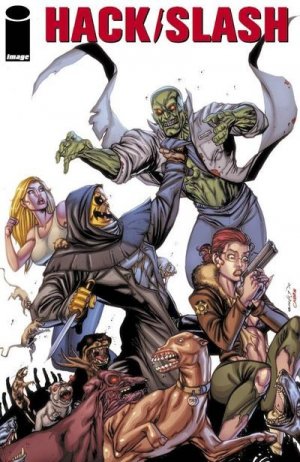 This issue is more of a race against time to save Lisa. It provides moments of great character development and a chance for old fans to see some familiar faces. Of course like any other Hack/Slash, the gory violence is delivered express mail to the reader's optic nerve.

The writing of the book, which is still consistent, never fails to be entertaining and throws in odd choices for monsters of the month. The strength of the book lies on the chemistry of the main characters and how they react to the world around them. Also, the strength of the story lies within the strong personalities that the writer portrays through the characters. This serves as a backbone to every new adventure the duo get into every month. As the writing goes on, it still feels fresh. Sure the book is trapped in the same concept month after month -- the duo fight a different monster or slasher in every new adventure -- but it is still able to keep things interesting. Sometimes the book feels like it's Scooby Doo born from an 80's slasher film. But hey! It's alright to have a guilty pleasure.

The art captures the tone of the book perfectly and the storytelling presents the story well. But it falls short on drawing personality into the characters. All the girls in the book kind of look the same. The art does not showcase any type of originality as it is similar in style to a lot of different books out there. It's a good clone art, but in some weird way it works well with the book. After all, all slasher films are similar to previous slasher films.

Now that being said, this book has two things that I will never forget. One is zombie Bambis, and the other is one of the best lines of dialogue I have read this month and it comes from that crazy pet Pooch: "Master Lisa wish to take a bath and was concerned I would try to sniff her anus. Sometimes Pooch cannot resist. Humble Pooch must know what you ate for dinner." Classic!