Has this ever happened to you? You are driving on the highway with your best friend and all of a sudden a crazy demon chick appears from the back seat and puts you in a trance. You lose control of the car, your best friend is deperate she-- oh did I mention that your best friend is a hot emo girl? Well she is... Then she does the one thing that is going to put you out of the trance, she flashed her boobs and shoves them in your face. Has this happened to you right?  No... Well at least you can read about it this month in Image Comics' Hack/Slash #4.

The concluding chapter of the first story arc is fun and all fighting. Yes, this is the issue when they finally fight the bad guys. In fact this issue can be summarized with four events: they fight the bad guys, Maggie dies, we discover that Samhain is Akakio the founder of the Black Lamp and lastly our main characters say goodbye to their supporting cast because well... they can't risk putting any of their friends in mortal danger anymore. 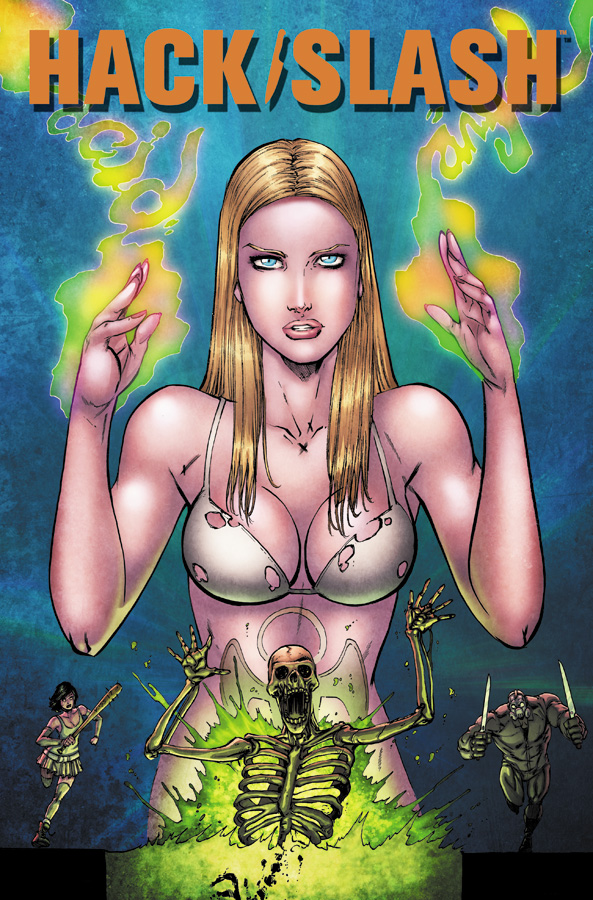 The art of the book is okay; its not very stylized but it gets the job done. It has a flair to represent a youthful tone into the characters. Unfortunately the lack of detail of the backgrounds hurts the plot of the story as we don't get the sense or we don't really get to see the threat of hordes of zombie animals, that are roaming all over the place. Also Maggie and Lisa look almost the same. The action is frenetic and it plays really well in the comic. The color is excellent and it certainly exalts the pencils giving the book a more pleasant and interesting look.

The story is a turning point in the franchise as a change in the supporting cast is sure to put this book into a new direction. This is a must for the series as the book has fallen a bit into the pit traps of storytelling deja vu. Think of this as how in every episode of the Power Rangers, they have to fight a big monster. Hack/Slash, is getting to that point where its becoming a gimmick. Hack/Slash is a monster of the week kind of deal. Its not how interesting the story is but how interesting the characters react to it. Excellent characterization, is the strongest attribute this book has. Also the book is good at delivering funny unexpected scenes like the flashing of the boobies that happened in this issue.

This book is not about the writing or the art, its about horrific fun. Its about enjoying the book regardless of whether its smart, stylized or a major contribution to the art form. The creative team knows this and they are confident in this. This first story arc is really for the fans of the book. It is also accessible to new readers but the fans are really the ones that will get a kick out of everything happening here. So the creative team is really delivering to the old fans but in a way they are also saying "one more for the road" before we move in a new direction. Hopefully the next story arc could be a great jumping on point for new readers. If you like a fun, cool parody of slasher films, with interesting characters this is the book for you.

Overall Score - 6.0/10
*Satisfactory - A title that's not for everyone, has a few stand out moments. Maybe if you have a few extra bucks it's worth picking it up*

For more Hack/Slash check out the reviews for issue #2 and #3.