It's finally here, the next installment of the Halo franchise heralding in another trilogy of DMR shooting, plasma sticking, over-shielding, and sleepless nights of online matchmaking. Halo 4 has been under the microscope since its announcement of development and has some of the biggest shoes in gaming to fill. New developer 343 Industries promised us the utmost care and sensitivity while working with this monumental intellectual property.  343 ensured us that they were just as passionate about the Halo universe as the fans were if not more so and would endeavor to bring us a promising new future of Halo gaming. Well? 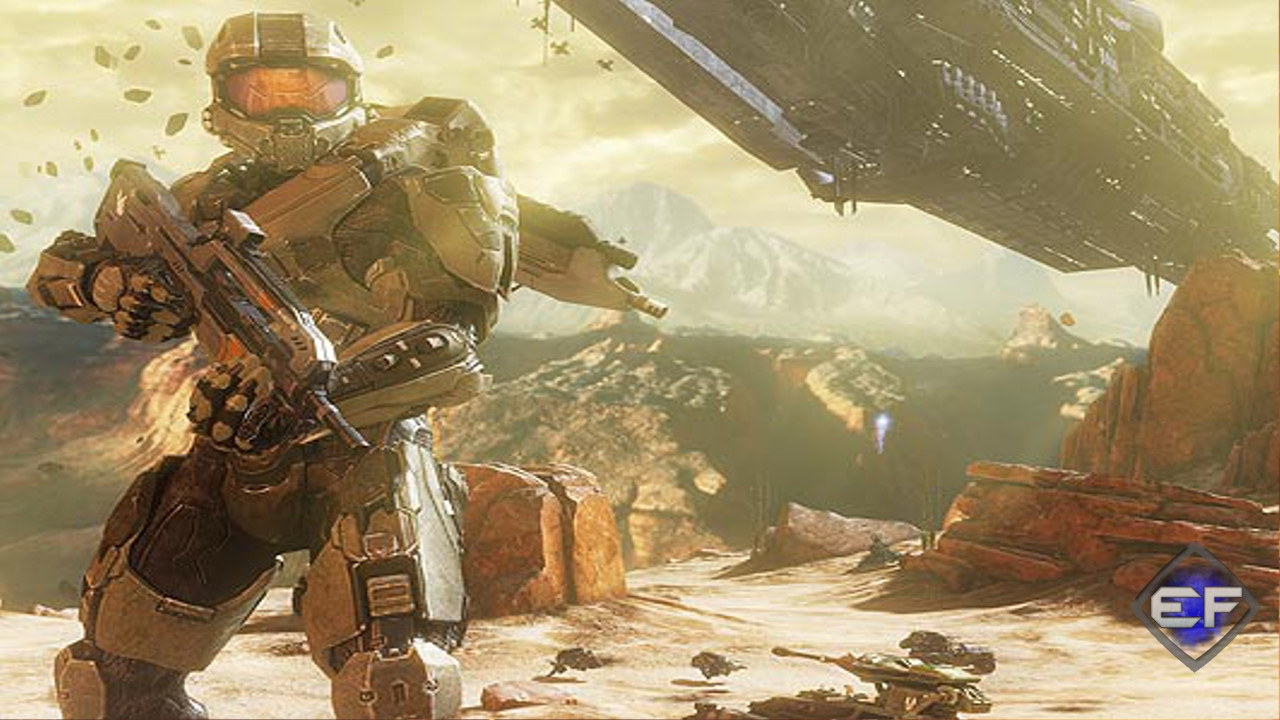 Halo 4 is a beautiful game, simply put. Every single model and texture feels alive, vibrant, and fluid; making for a memorably cinematic experience that even observers can enjoy. The amount of detail and care put into the newly revamped Cortana and Master Chief models not only brings tears of pride to those who have played Halo since Combat Evolved but also propels the franchise up to the forefront of the modern FPS arena once again. The sleek and masterful redesign of weapons makes for interesting diversity among similar weapons within both campaign and multiplayer and the Forerunner weapons are a welcome addition to the familiar arsenal of UNSC and Covenant arms. From the wreckage of the Pillar of Autumn to the vegetation of Earth every set piece is unique and not only serves a purpose but also makes for some of the most beautiful environments to have graced the 360 in a while.

Along with these redesigns comes an entirely new set of sounds effects and a gorgeous orchestral score. When firing the Assault Rifle for the first time you can feel the recoil, you can hear every bullet, and just shooting the weapon is satisfying in its own way and never gets old. It goes without saying that while the sound effects are well-crafted the music, as it always is with Halo games, serves as one of the most important aspects of the entire title. Halo 4’s gameplay and cinematics create one of the most powerful gaming experiences to date with the way Neil Divide breathes new life into the game by creating an entirely new score that brings these aspects together in harmony. One of the biggest concerns about this title was the changing of creative hands in regards to music but Divide does a brilliant job portraying the actions of Master Chief through orchestral detailing.

Halo has always had strong storytelling with a compelling tale to tell. What the previous games did was frame the universe very well, we learned about the hidden honor of the Elites, the creation of the first Spartans, and the struggle of the human race as it finds itself in an increasingly hostile situation. What we did not learn, however, was very much about the Master Chief himself, John, or Cortana. When Chief and Cortana split ways at the end of Halo 2 there was a weird sense of disconnection between the player and Chief that carried over to Halo 3 the entirety of which was about retrieving the lost Cortana from the clutches of the Gravemind. To say the Chiefs motives were strange, since he is supposed to be a heartless war machine of sorts, is to lightly touch the tip of the iceberg that serves as the base of Halo 4’s campaign experience. 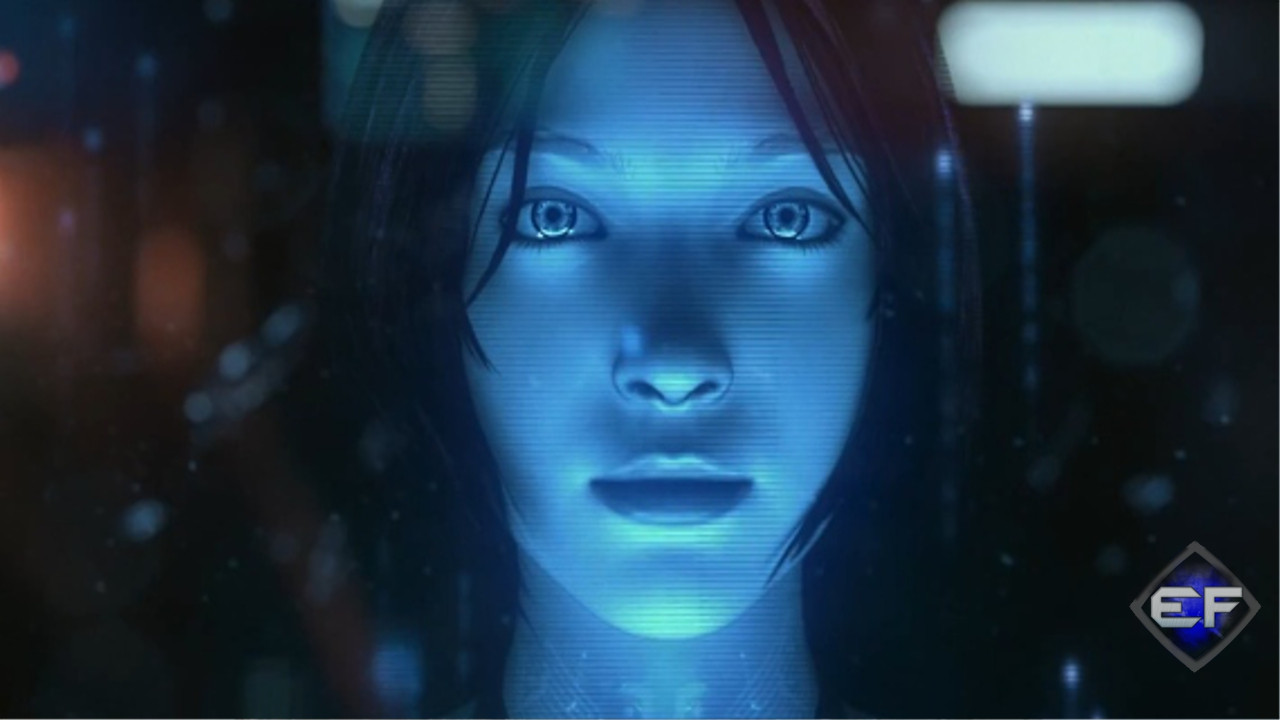 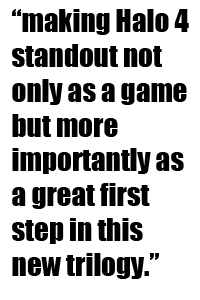 The argument could be made that Halo 4 presents itself in the form of a space opera more than the action-packed blockbuster we’ve come to expect from AAA titles. While the focus of the story (once again) has primarily to do with how Chief will destroy some sort of evil that threatens the universe and human race, time is taken to show a more human side of both John and Cortana. It’s a strange choice by 343 Industries and one that no one really expected, this borderline love story between a soldier and his A.I., but it resonates well within the setting of Halo 4. Halo 4’s story elements create a unique yet comfortingly familiar feel, making Halo 4 stand out as not only a game but more importantly as a great first step in this new trilogy.

Aside from the wonderful story, great aesthetic appeal, and breathtaking score the gameplay is also very strong. While there are some obviously inspired additions, such as stick-click sprinting, the overall game still feels like a Halo game. This translates well into multiplayer matchmaking as Halo 4 pulls from the best of both worlds by adopting loadout customization, offensive and support perks, and the ever present built-in sprint function from other leading FPS titles while still maintaining the creative and frequently ridiculous happenings of Halo multiplayer. Infinity Slayer brings a fun twist to the classic deathmatch gametype with the addition of ordinances (supply drops) and random weapon spawns. Spartan Ops also guarantees continually new content with scheduled installments of episodic multiplayer content. 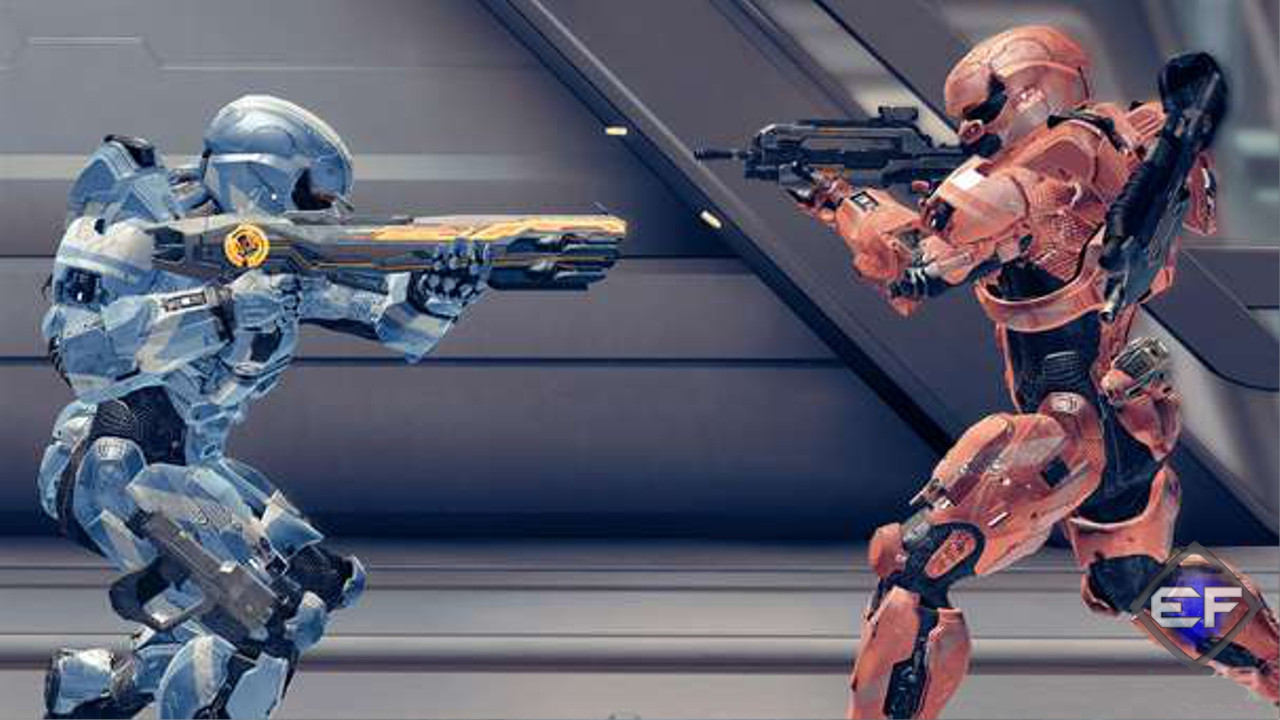 Whether you are new to the Halo universe or are a seasoned veteran it is clear that Halo 4 is the right time to jump in. The game abides by the old standby for success of being easy to pick up but difficult to master. Either way, Halo 4 entirely ensures hours upon hours of fun with friends both online and offline. If this game isn’t on your radar to pick up soon I’d recommend changing your shopping priorities and making it happen as soon as possible. Don’t miss out on what is sure to be a top contender for Game of the Year!