"An astoundingly curated collection of games, weighed down by some unfortunate issues"
By: Euan Dewar | Xbox One Reviews | November 18, 2014
I'll waste no time in saying it: The Master Chief Collection is easily the most impressive assemblage of content I've encountered in gaming. The hours of classic gameplay on display and the way 343 have packaged it altogether is going to be hard to resist for even those who haven't been particularly interested in the Halo franchise before. Unfortunately, the fantastic form of this collection is undercut by a whole lot of bugs and, as it stands right now, an incredibly shaky multiplayer component.
Let's start with the hard facts, what will buying the The Master Chief Collection get you? The short answer is a whole goddamn lot. The first four Halo games are all in here. This version of Halo: Combat Evolved is the Anniversary edition that we got back in 2011 with it's updated graphics and various other little tidbits. And, what with this year being the 10 year anniversary of Halo 2's release 343 have given that game the same treatment. Not only are the visuals updated (and like CE you can switch back and forth at any time between the new and old visuals) but we also have brand spanking new CGI cutscenes that are properly gorgeous. The updated Gravemind is gross, in a good way. 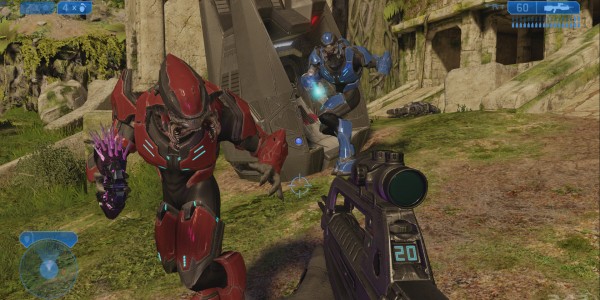 Halo's 3 & 4 obviously haven't been given the anniversary update, having been released (relatively) recently. They have however been updated to run in 1080p at 60fps, as have CE and Halo 2 (the latter of which actually runs at an odd 1328x1080 for technical reasons. It isn't noticeable though and doesn't affect the experience either way). The resolution jump is nice but the framerate improvement is big. The increased smoothness it affords makes the franchise's already tight-as-anything gameplay feel better than ever. Regrettably, the framerate isn't as consistent as it should be across the entire collection. In the first three games it is generally steady, with the occasional hitch during cutscenes. In Halo 4, however, it falls short more frequently, sometimes even dropping below 30 in the more hectic moments.
343 have also tried to shake up proceedings for those who are already intimately familiar with these games. There are a whole bunch of curated campaign playlists that seek to re-contextualize the levels on offer. Some playlists combine levels of a certain type (such as one that combines all vechicle-based levels) and others plop you in with a combination of different activated modifier skulls that provide you with an increased challenge. My favorites though are the cross-game playlists which act as a megamix of moments from across the four titles. Hopping from one game to the other in quick succession can be a whole lot of fun. 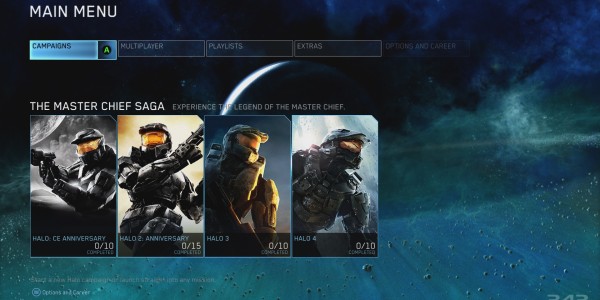 And, as is to be expected from the Halo franchise at this point, the amount of achievements up for grabs is nutso. There's a full 450 separate achievements to be earned, totalling 4500 Gamerscore overall. They aren't just some easy quick pickups either, some of these will truly test your mettle and your sanity.
Sadly though, The Master Chief Collection isn't as polished a product as it is substantial. All four campaigns have bugs to varying degrees and to varying levels of strangeness. In addition to the previously referenced framerate issues, I came across a fair few sound issues with weapons sometimes firing off without making any sound at all, as well as a lack of muzzle flash in some instances. I also experienced several one-off curious little oddities such as one incident where I respawned with no shield(?) and one very peculiar time when I earned a co-op achievement while idling on the menu.
All this talk of bugs brings us rather unceremoniously to this game's multiplayer component. Now, the meat of what is offered here in terms of multiplayer is just as large and impressive as any other aspect of the collection. All the maps from Halos 2, 3 and 4 are included, playable in their original engines, along with six of Halo 2's maps remastered in the Halo 2 Anniversary graphics engine. And, for the first time ever, you can play Combat Evolved's multiplayer online instead of just local. Quite an offering huh? 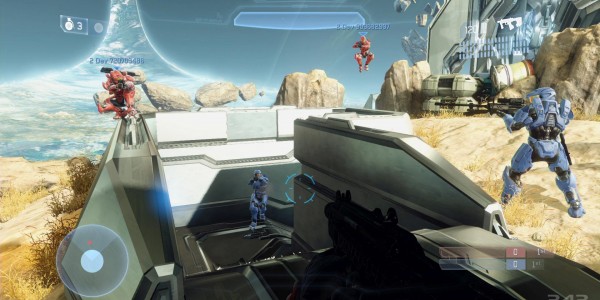 It's disheartening then that the multiplayer has been plagued since launch with widespread issues. Matchmaking times have been excessive and general stability has been a big problem. These concerns have even forced 343 to lock access to certain multiplayer playlists until they're finished making sure everything has been fixed. It's a shambles all round, one that has prompted several apologies from 343 and Microsoft.
As it stands The Master Chief Collection is blow-for-blow the most enticing package you can get on Xbox One right now. Hell, it's one of the best regardless of console. I would just advise maybe holding off for a little bit before you run out and spend the money on it. It's safe to assume that a week or two from now most of the concerns I address above will be fixed in one form or another. But it's a still a shame that what should have been a successful launch for an ambitious project has been troubled by such impertinent complications.
Rating
8.0
Pros