By: Steve Wright | Xbox 360 Features | September 15, 2012
People get hyped up for FIFA every year. As we approach the end of September or the start of October, a demo comes along and we get hyped up even more. There's no question, FIFA is the most popular sports game in the UK, so let's see how the demo fairs.

It's important to note that if you like FIFA, this is a demo you won't tire of. With most demos, you play through them once, and then have no reason to go back again. With FIFA, you play match after match, that's the great thing, the demo never ends, it just limits the game modes at your disposal. There are blurbs for each and every game mode available, but the only one you can play is a simple kick-off / exhibition match. The matches are fixed to a time limit of 3 minutes each half with five teams; Arsenal, Manchester City, AC Milan, Juventus and Borussia Dortmund to choose from. A nice wide range and one that will let you experiment with build up play; be it slow, balanced, or fast. The first thing you'll notice when choosing your team is a little crest called EA Match Day, this is an exciting new feature to the game which has an effect on commentary and how a player will perform. If a player is playing well in real life, his rating will increase. If a player has yet to score any goals for his team, the commentator will pick up on that, and mention how he needs to end his goal drought, as long as you have EA Match Day enabled. Naturally, the commentators use words like "he" as it would take years to do a line for each and every player, constantly be updated. There's no word yet if the feature will be included in Career Mode, but it's unlikely what with all the transfers going on. It will give you a reason to play exhibition matches or on-line exhibition matches if you don't already have one. It also talks about teams as well as players. When the team comes out of the tunnel you might hear Martin Tyler say "the home team is in 4th place in their league, meanwhile, the away team is 8th in theirs." It makes it feel more realistic as well as unpredictable, which is just what EA Sports have highlighted they're aiming to achieve. 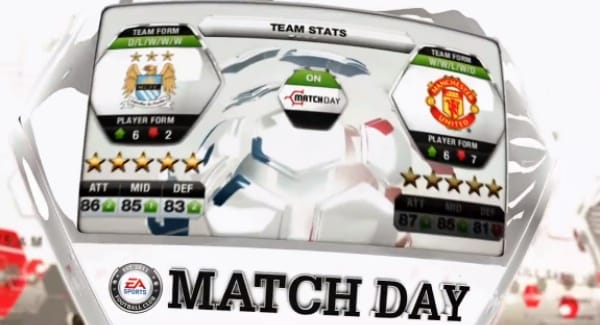 There are many new features when you finally get down to the pitch including an updated Player Impact Engine, many new animations, substitutes warming up etc. But the two biggest additions are First Touch Control and smarter AI. First Touch Control essentially makes the result of a pass less predictable - if you're holding the right trigger when you recieve a pass because you want to sprint away, depending on the skill level of the player, you will either keep it under neat control, or, (and Pablo Zabaleta's very good at this) it will knock off your shin giving your opponents a chance to come back at you. This may make the game seem like a see-saw, with the ball going back and forth, but in actual fact, the addition is very subtle, meaning if you do whack it ahead of yourself, you still have a chance of retrieving the ball, there's more of a battle for posession. However, try to face Oxford United up against Barcelona and you may have a problem, it's probably best if you try to stick to teams in your own league.

The new Attacking Intelligence is what really catches my eye though, it completely changes the game and makes FIFA 12 look like a sluggish, clunky and unresponsive tortoise. Play a one-two and the player who passed the ball will make a darting run, moving himself into a smart position, but what's more, a third player (off the ball) will often make his own run without the ball ever touching him meaning you have more passing options to choose from and making the game feel more dynamic. It by no means brings back the ping pong method as the defensive AI can be smart enough to cut your passes out, but it's so much more like real football. Go back to FIFA 12, and you'll realise something is missing. And don't get me wrong, the new attacking intelligence by no means makes the game easy; Professional difficulty on FIFA 13 is like World Class on FIFA 12 (mainly thanks to First Touch Control, but we're not complaining.)

There is almost nothing to complain about. There is another new feature known as Skill Games which unfortunately seems a bit tedious and has been done many times before in rivals Pro Evolution Soccer. And as slick as the menus look, they still don't feel as responsive as they could. It's always been the same with FIFA menus, there's just a little bit of lag between your input and the games output. Nonetheless, FIFA 13 is shaping up to be the best FIFA yet as well as the best soccer sim yet meaning Pro Evolution Soccer 2013 has once again got some catching up to do. With all these new features and more exciting things to come in Career Mode, why go anywhere else?