Hands On With Hitman: Absolution

Over this past weekend, I managed to get my hands on Square Enix and Io Interactive’s much anticipated Hitman: Absolution. I slipped into the custom-fit suit of Agent 47 and, after nearly 90 minutes of venturing through three different missions from the game, I came away with a smile on my face.

It’s been nearly six years since we last saw Agent 47 in Hitman: Blood Money. Agent 47 is now on the run, betrayed by his previous employers. Absolution will deal with 47 getting to the bottom of the conspiracy. The two missions I played have already been shown off at E3 and subsequent demos, so they were nothing new visually, but finally being able to control the actions of the original assassin is a thrill.


The first level opens with 47 entering a Chinatown lookalike, with the intent of killing a drug kingpin. The area is covered in NPCs, all going about their business in a believable way. The area has a heartbeat and feels much more alive than the stagnant, crowded areas of other games. On this note, I decided to test out the physics of the crowd as best as possible. I found the target standing under a guarded pagoda, talking on his phone with a potential buyer. After stalking him and seeing various places and ways he could be killed (crushing him with pallets, poisoning the food he’s eating, etc.) I find the place where his dealer is waiting for him. Silently, I snap the dealer’s neck. Now, on a table behind me, there was a sniper rifle and I decide to put it to good use. One shot was all it took and everything broke down – the crowd began to panic and scatter, showing off just how chaotic and realistic an actual crowd would react to a bullet being fired in their midst. I needed to slip away unseen. The way to do this was very reminiscent of Assassin’s Creed with the crowd blending technique. 47 can stand still in a crowd to blend in with them and remain anonymous. Unfortunately, the crowd was always moving, so I was left out in the open. With Ballers blazing, I fought my way out of the level and ended the mission with a less than great score.

The second level was from the Contracts demo, the new mode introduced to add replayability to the Hitman games by allowing gamers to create their own contracts for their friends and others to complete. 47 starts outside of a hotel, the objective is to make his way to the top floor to reach his target. As with every Hitman game, options are aplenty. You could go through the front door, unloading round after round, you could draw a guard out into the street, take him out and disguise yourself in friendly attire, or you could do as I did and find the basement to enter the hotel from the bottom. The place is dilapidated and falling apart, so there are construction workers trying to fix the place up. One smack from a wrench and I slapped a hard hat on a made my way up. The further I went up, the closer I was inspected by the guards until the suspicions levels were so high, I was forced to act. Using my trusty, rusty wrench, I knocked out a suited guard and had myself another disguise. I rode an elevator up to the target’s floor.


Utilizing the all new Predator mode, which allows 47 to see through walls and predict enemies’ paths, I maneuvered around the guards unseen and slipped into the room adjacent from my target. As the door was locked, I climbed into the vent and made like Bruce Willis in Die Hard. Shortly after, a short cut-scene plays and shows the whole plan was a set-up. The room around me explodes and I’m left to find my way out of the inferno. Once I make it outside, I find the cops have already descended on the hotel, helicopter in tow. I climb the fire escape and reach the roof as the hotel detonates. Managing to avoid the machine gun fire from the helicopter, I leap, Matrix-style, to the building across from the hotel. Unfortunately, the cops are already on the roof of this building, and the helicopter followed me there, so I’m in a pickle. However, a guard strolls into the room I’m in and a quick knife to the throat allows me to become one of Chicago’s finest. I make my way across the rooftop, past the two other guards there, past the blinding searchlight of helicopter and into an apartment of amateur pot growers, but they’re panicking and looking out the window.  I manage to slip by unnoticed. This is where the Contracts demo started. In that demo, you needed to kill some people to make your contract. I just needed to escape.

Wearing the cop uniform allowed me to move freely, but I was still being looked at suspiciously. I found a safe in one of the apartment rooms, which a guard was eyeing up with wonder. When he left, I opened the safe by using the combination I found in a diary in the room. After a few seconds the cop returns to find the safe open and a good chunk of change staring at him. He calls his friends into the room, friends who were guarding the elevator I needed to reach to escape. As they all went into the room, I walked to the elevator and rode it down. However, on the bottom floor there were more police, all of whom eyed me warily, so I did what cops do best; eat donuts. I hid in plain sight, pretending to munch on a donut until the coast was clear. As I walked out, I found myself on a train platform, which was filled with even more cops. Unfortunately for me, all trains had been stopped until the cops had found me. I snuck into the control office and switched the trains back to active. After blending into the crowd and waiting for the train to arrive, I timed my movements perfectly with the crush of people trying to board the train. The single guard watching over my door was overwhelmed and missed me. I breathed out a sigh of relief and watched my points pile up in the end of mission screen. 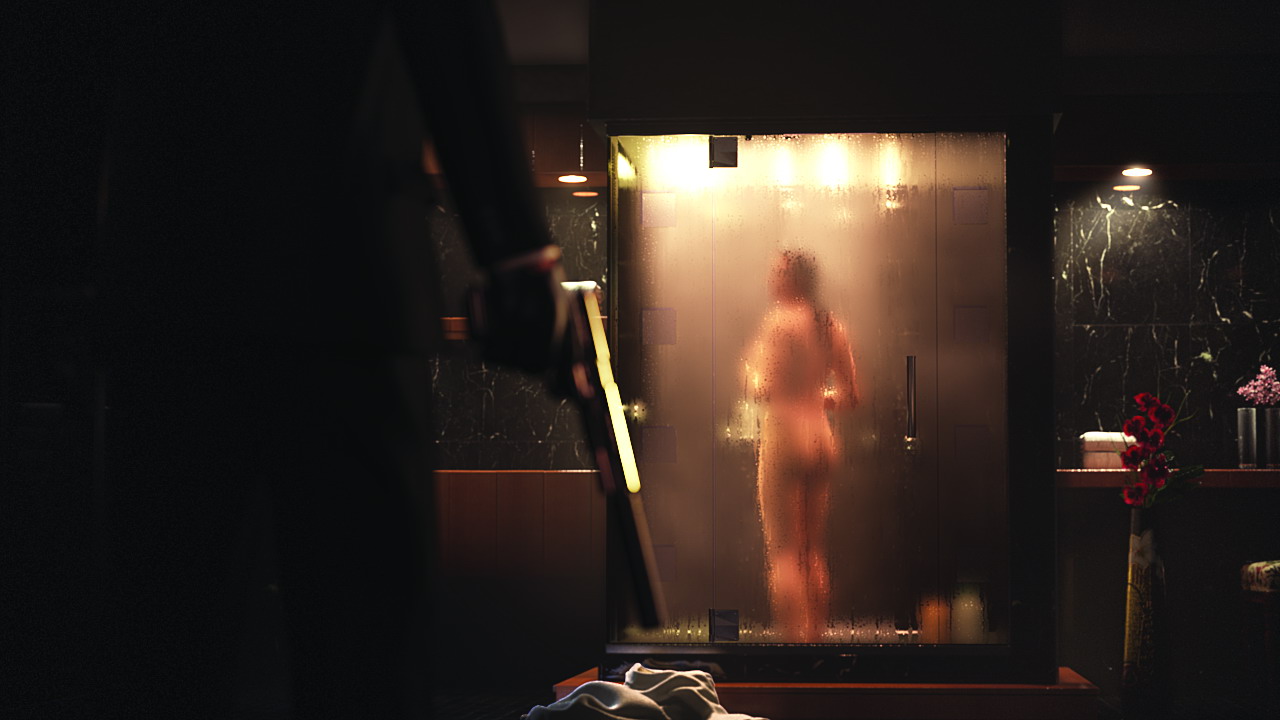 After playing nearly two full levels of Hitman, you’d think that my time would be over. Alas, you’d be wrong. The third and final level was not one shown off in any previous demos and finds 47 approaching the house of his former employer Diana, who is, if you’ve seen any trailers thus far, a target. I decided that I’d had enough sneaking from the last level. I wanted to test out the gunplay of Absolution. Note to self, aim for the head. As I sprinted through the level, guns blazing, I found that enemies can take an extraordinary amount of damage if they don’t catch a bullet in the brain. Four shots usually do the trick, so if you want to save your ammo, go for headshots. Shootouts are your last resort in a game like Hitman, but that doesn’t mean it is not a viable option. Using cover and light squeezes of the trigger, which slows down the camera for pinpoint accuracy, it’s a breeze blazing through a level with dual silenced Ballers. You can hide behind nearly any object in the environment, then pop up to fire off a few rounds before enemies can react. It’s all very normal for a third-person shooter but that doesn’t mean it’s bad. After the dispatching of every hired gun guarding Diana, a cut-scene plays and 47 kills his long time employer. It’s a little sad to think about and made me wonder if there would be any more emotional scenes from a game which rarely shows any emotion.

My time with Hitman: Absolution was long, nearly 90 minutes, and could’ve easily been more. This is a game that, if you take your time and try and achieve the perfect score for every level, can take up to 50 hours to complete. Then there’s always Contracts mode to go through which adds even more hours. For those of you that have been waiting anxiously for the next Hitman, the time is almost over and I can say without a shadow of doubt that it will have been worth the wait. Hitman: Absolution arrives in stores November  20th, and it’s absolutely a game I'll throw some money at.