Hands On With The Binary Domain Demo

By: WilsonTaylor | Xbox 360 Features | February 23, 2012
Binary Domain is a cyberpunk cover-based shooting game about shooting robots in Japan while issuing commands to your teammates. This may not seem like the most compelling and original premise in the entire world, but where Binary Domain seeks to stand out is not in reinventing the formula, but rather doing it better and in more compelling and experimental ways. With an emphasis on storyline and squad-based combat, it tries to give a very real, fleshy taste of its gameplay in its demo time. Does it hold up? Is its unique approach to interacting with team members enough to keep the demo interesting?

It starts with the usual tease of the modern day demo, showing you the main menu and then blocking content off. In this case, the blocked off content is the multi-player, making this a strictly single player trial. Players are given the choice between two episodes, and both show off interesting aspects of the game as a whole. The beginning of the first episode is a cutscene of the main character and his squad-mates conversing about the current situation, nothing new under the sun, and then you're given the choice of team members, being allowed two of four, two men and two women. After this, the game starts to become interesting. You're asked to answer a question by one of your teammates while you're walking toward the objective. At this point you can respond by either pressing a button while holding the Left Bumper to decide negative or affirmative on the question (Which varies depending on which characters you decided to drag along).

If you're wearing a headset, however, then you only have to hold the left bumper to see your options and can then proceed to say your answer out loud. And thus the true game-changing mechanic is introduced well and with style. Through the rest of the demo, you would be commanding your squad via buttons or headset. While buttons are an actually viable option and you aren't necessarily crippled by lack of voice recognition, playing with the microphone is strongly recommended as it gives you more options in commands and comments than the button interface allows. With the headset, giving commands to team members is extremely easy and the voice recognition works surprisingly well to a point. 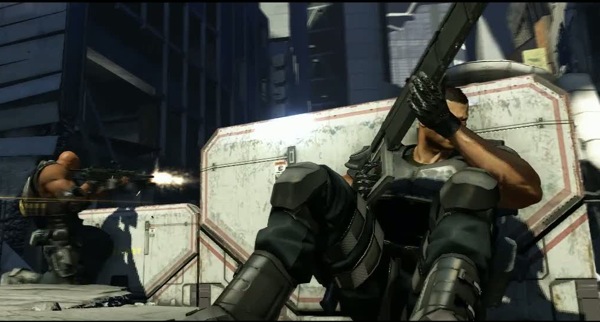 The mechanic is hindered by two major flaws, prevalent even in the short amount of time you're given in the demo. The first is that the recognition almost works too well. When talking to other people or even to yourself, it can often be interpreted as something entirely different. When what you say has an actually pretty significant bearing on the game, this can lead to annoying (if not exactly disastrous) results. This leads us to the mechanic's next major flaw.

The trust meter is displayed on the top of the screen and is titled pretty significantly. How well you perform and how you treat the NPCs directly affects their willingness to obey you. This may seem intuitive and innovative at first glance, but it renders the voice recognition an almost completely unreliable system. When you accidentally shoot your team member in the heat of battle or actually let your squadmate know directly what you think of them and two minutes later need them to put the pressure on so you're not turned into scrappy little bits and your teammates flat out decide to ignore you, you'll be cursing the mechanic and, through extended play, will effectively cause you to train yourself to not use it as a whole. An unreliable system is a system that, redundancy be damned, cannot be relied upon.

But overall, with a pretty thrilling boss battle in the first episode and a boss battle teaser in the second, and the actually fairly smart implication of voice commands MOST of the time, the Binary Domain demo is worth looking into. Though not shining into some here-to unknown paragon of cover-based shooting zenith, the weapons feel great, the dialog is well written and the command system is extremely satisfying to use when it decides to work. If this demo is any indicator to the game as a whole, then we can take it right now for the flawed but still fun and endearing Japanese Gears of War cover shooter that it is.