In 2009, The Hangover emerged as a “sleeper hit” grossing $277 million in the States and $467 million worldwide. Given the brash comedy’s exceptional box office success and (surprising) awards success, it spawned a sequel titled The Hangover, Part II. The follow-up just hit theaters this weekend but has already pulled in $195 million worldwide, with $135 million of that coming from the United States alone.

It’s obvious that Warner Bros. wants more of the Wolfpack. TheWrap relays that “Part II” scribe Craig Mazin is already back on board for screenwriting duties for "Part III." Series director Todd Phillips told Vulture last week that his “idea [for the third installment] is serious. Deadly serious. It will not revolve around a wedding, and it will not revolve around a forgotten night.” 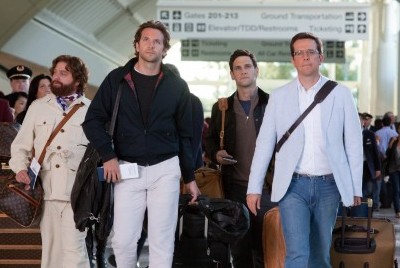 Mazin seems to be thinking along similar lines as Phillips. In a recent interview with Badass Digest, the screenwriter relayed how he’d like to conclude the third film:

“I think the third movie ends with Doug staring at a row of crosses in a graveyard. It’s everyone – his wife, his family is dead, everybody from the first movie is dead. Somebody shows up and tells him his dog is dead.”

A turn to the “deadly serious” might be an interesting one for the series to take, but it might not be the best. The series is known for its riotous humor, and although “Part II” isn’t all that great, it nevertheless continues with the tone set by its predecessor. A third film with a heavily dramatic tone could ruin that sense of continuity; even worse, moviegoers might not take it quite as seriously as Phillips.

How do you feel about seeing Phil, Stu, Alan and Doug on a third and “deadly serious” adventure?