A lot of the mystery that made me come back to this issue is answered – which makes me think writer Grant Morrison wasn’t smoking Lewis Carol’s stash like during issue one. So should you really keep reading, or does this vulgar and nonsensical second issue continue the story well enough that you’ll want to keep reading? Again, I’ll have to wait and see issue 3 before I can be sure if this series will be good or fall off it’s little horsey’s wings.

Killer and former detective Nick Sax has several problems: I would say his most pressing being that he is in a mob hospital with torture on the way, but Nick would rather have the little blue horse named Happy, who only he can see and hear, leave him alone. No such luck as his newfound “friend” tries to help him survive and begs for his help.

While I should applaud Happy #2 for only having one curse on the first page versus the dozens on the first page of the previous issue, this comic is still for mature audiences with it’s vulgar dialogue and tons of bloody violence. 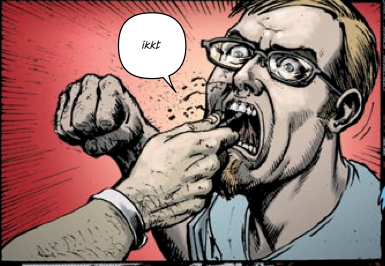 Some of the biggest questions I had from the first issue are answered fairly quickly and nonchalantly; is Nick crazy, or does Happy truly exist; and why is Happy there?

Right away, Happy is proven to be real when he goes out in the hall and can tell Nick how many people are coming for him – and since he is correct before Nick can even see how many people are there, clearly Happy is real. However, our doped up friend Nick doesn’t think about this, which is understandable since besides the drugs in his veins and the splitting headache, Nick  didn’t want to take out two minutes to count the number of guys he knocked out with more trouble on the way. However, this forces him to question the horse’s existence and come up with a way to prove whether or not he is real. And while I love the simple ingenuity his idea of how to do that is, and it leads to the funniest part of this issue, with Nick talking about the blue horse to his acquaintances, it takes up a large chuck of the issue and makes the story very drawn-out – which is especially surprising since Nick has been given a time limit when he learns what Happy needs his help with. The resolution of this request, which I didn’t expect to make sense but it does - well, as much “sense” as a flying blue horse can make - is the only reason to keep reading this title, which Nick doesn’t seem to want to fulfill anytime soon for us.

It is still hard for us to root for Nick, not only because of his refusal to help (which could be sympathized with since he is on the run) but also because of his general disregard for his and others’ lives and his binge drinking and drug injecting. I can’t see him being motivated to help Happy anytime soon unless the “Christmas miracle Happy is talking about is as persuasive as the three ghosts of time in A Christmas Carol were to Scrooge. Nick Sax is a big jerk – an occasionally funny big jerk, but a big jerk nonetheless. 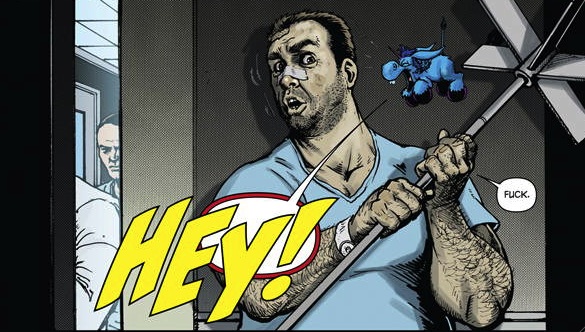 Happy is the only other character we can hope to enjoy, but it turns out he is just as much of an endurance test as Nick. He is never funny when he makes references that constantly shoot out of his mouth more than the bullets in Nick’s gun. I guess props should go to writer Grant Morrison for making Happy just as annoying to us as he clearly is to Nick. When he yells "Hey" at him it reminds me of Navi from Zelda who is often considered one of the most annoying characters of all time. They're even the same color! But at least Happy copies from the "best" - and the probably inadvertant reference makes me smile.

But Happy does stand out on artist Darick Robertson’s pages. He is on nearly every page and really shines next to colorist Richard P. Clark’s purposefully dully colored brown world, and still just manages to stick out when Clark is coloring the white and gray hospital. Happy’s blue mane makes a strong contrast. The artist does a great job making Nick look like the slob he is, sometimes having stuff on his face that I can’t even identify. The rest of the artwork, like the colors, really match the tone the comic is trying to set. Normally I would complain about boring, almost non-existent backgrounds, but the colors stress the dank atmosphere perfectly with some white flurries to remind readers this comic takes place during Christmas time. The actualy characters also match their dank atmosphere with very gruff looks that include bad five o'clock shadows.

The Christmas setting is also an interesting choice that I think controls a lot more of the comic than it would seem. The snow in this issue, the Christmas lights last issue, the facts that our protagonist is named after jolly old Saint Nick himself (which kind of makes me chuckle when I think about it…), Happy’s whole bit about “miracles.” What better time for miracles than Christmas? I just hope this subtly dominant choice (OK, it is somewhat shoved in our faces) is not pointless and does contribute to the meaning of the story – but with the king of uncontained violence Grant Morrison, I don’t expect an ending as cookie-cutter dry as A Christmas Carol. 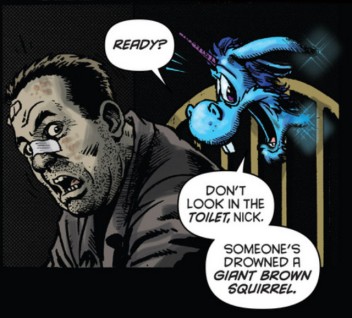 Despite answering a large chunk of the mystery, Happy #2 still leaves you with a lot of questions. We still have no idea how Happy came into existence and I wonder if the supernatural elements (other than Happy) present in the first issue are going to play a big part in the future of this universe. Then there were several other mysteries brought up in this issue that I don’t want to spoil for you.  With only two issues to go, it’s a wonder how they’ll get the answers in without it feeling cramped. I don’t think they will pull it off, and I wouldn’t normally bother with issue three, but because this issue had to have such a great and creepy cliffhanger I need to keep reading. Happy is like the drugs and booze Nick Sax gulps down – it isn’t good for you, but boy is it addicting.