One of cinema's best-executed franchises comes to a close tomorrow after just over 10 years, so we've been counting down our favorite "Potter" films all week. This concludes with our current favorite (we'll see after tomorrow), Harry Potter and the Deathly Hallows, Part 1.

When it was first announced that Harry Potter and the Deathly Hallows would be split into two parts, it was met with cynicism; a way to milk as much money out of the series as possible. But it turned out to be a smart move critically as well as commercially. We at Player Affinity collectively thought it was the best Harry Potter film so far as the series moves out of Hogwarts to the dark world of Voldermort’s takeover. Here are our thoughts on the first half of the seventh chapter:


MAX: While “Part 1” feels very much like one half of a larger film, it’s safe to say Yates and his crew have done remarkably well in closing out the franchise. It's no use to try and sell the film to someone not affiliated with the "Harry Potter" universe; everything in it is meant for those who have walked the road with the prior films and it makes no apology for it. This allows the cast and crew to embrace their world and scenarios a little more (dare I say) realistically, throwing Harry and company outside of the wizarding world in such a way not seen in past installments. The tone of the series has never been darker and in many ways, the crew is holding no punches when setting the film’s scale. It’s unfair to simply write “Part 1” off as simply setting the pieces up for what is sure to be a much more action-oriented “Part 2.” On its own, “Part 1” allows the characters, who have spent so much time on the screen, such a rare moment in the franchise’s history: sincere reflection. If “Part 2” is to represent all of the aspects that made the franchise so popular in terms of effects and production values, then perhaps “Part 1” will come to represent the heart of the franchise and its characters. 9/10

STEVEN: The scale is larger, epic even, and the consequences seem more dire, yet "Part 1" also takes this more emotional and at times reflective tone as Max puts it. We've seen these characters age film to film and as their situation becomes more challenging and grim, emotions from the collective 18 or so hours (or more if you count repeat viewings) of movie-watching bubble to the surface. Yates and Kloves continue to hone the craft of adaptation, and while "Deathly Hallows" can afford to be more loyal, split into two films like this, what's added and subtracted makes sense to achieve the overall goal of this story: giving fans a satisfying payoff. Even with the annoyance of this film ending before things really take off, there's that feeling of what's to come on the horizon along with an emotional cliff-hanger that could almost rival The Two Towers. The series has simply never been more mature or ever felt more real. 9/10 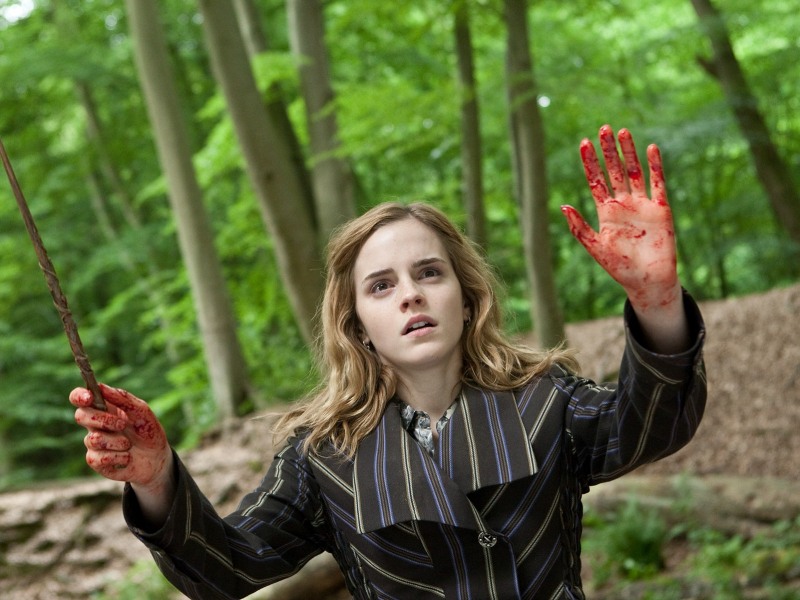 SIMON: "Though containing enough novel-jargon to drive any non-fan away in the first act, part one of the seventh installment delivers on the character-driven aspects that make the novels the special additions to literature that they are. The three principle actors — Radcliff, Watson and Grint — by far give their best performances of the series and it is their interactions that make the film memorable. Yates has upped the ante with regards to magical mayhem and combined with a main character death, a deeply ominous plot and foreboding scenery, this is the most mature “Potter” yet. Although I wished they had not stripped much of the aerial battle that occurs towards the beginning, the great majority of the novel remains (well, the first half that is) and is done in a way that leaves the proceedings feeling less rushed than some of the previous instalments. If the second part of this exciting conclusion can match, or hopefully exceed the heights of “Part 1,” then this series will conclude in a manner making it worthy of unbiased recognition. 8.5/10


KIERAN: What can I really say that my colleagues haven’t already said. “Deathly Hallows Part 1” is clearly one of the best films in the series and the reviews for “Part 2” so far suggest a fitting end and the most likable movie yet. Having a stark opening, “Part 1” is certainly the darkest and gloomiest of all the Harry Potter movies so far and David Yates was able to make it a stylish fantasy. Yates goes deeper in the wizarding world, examining the grimmest elements of this world and showing the repression that happens. The series has been taken out of its comfort zone and it is a fitting adaptation of the first half of the novel. I particular like it when Helena Bonham Carter is allowed to go completely crazy. One of the strongest elements of the story is that Harry, Ron and Hermione are three teenagers on a quest and do not even know where to start. There is plenty of action, but it is a little too long and slow, preventing being the best Potter film for me, but it is still an excellent movie. Let's hope that “Part 2” is even better and ends the series with a bang. 9/10