Harry Potter Countdown: No. 3 ‘Order of the Phoenix’

The countdown continues today with our third favorite "Potter" film so far, which would be none other than Harry Potter and the Order of the Phoenix, which sees Harry discovering a prophecy that has dire consequences for the rest of the series. This was the last time the series would change directorial hands as director David Yates joined, creating the dark tone that the series has since been renowned for.


SIMON: In stark contrast to Alfonso Cuarón’s adaptation of Rowling’s material, which turned my personal favourite novel into the most visually dynamic but ultimately hollow episode in the wizarding adventure, David Yates’ debut as director transformed the most bloated and dull book into the most intellectually complex and thrilling of the bunch. There are few faults to be found in Harry Potter and the Order of the Phoenix; all the principal players come into their roles, we get our first glimpse of a wizarding duel and a number of the key facets of the book (for example the secretive Number 12 Grimmauld Place) are interpreted into marvelous displays of on-screen fantasy. Topping off an already stellar production, Imelda Staunton inhabits the infuriatingly cloying Professor Umbridge with such conviction it makes us never want to see the actress on screen ever again. Rating: 9/10

MAX: When it comes to “Phoenix,” I definitely would agree that the film was an intellectual step up in regards to building on the darker tones established earlier in the last two films, largely due to Yates’ deft direction and Staunton’s turn as Umbridge. When it was not only Voldemort we had to worry about, but professors (individuals meant to protect Harry and his friends) torturing students, you knew the series wasn’t getting much brighter from then on (yay!). Yates was able to build more with less (“Phoenix” currently being the shortest of the films) and really pulled through in the closing 20 minutes for the Ministry of Magic smackdown. Rating: 7.5/10 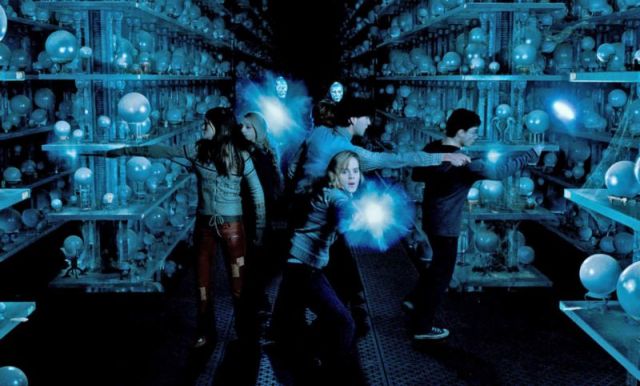 KIERAN: David Yates’ first Harry Potter film is certainly a stylish film for a blockbuster and because of its darker, more mature approach, makes “Order of the Phoenix” one of the strongest films in the series. Yates makes a fast-paced adventure with darker psychological themes and more emotional scenes. Imelda Staunton was an incredible villain being sickly sweet on the outside but with a heart of darkness. This was Daniel Radcliffe’s best performance so far in the series. Rating: 9/10

STEVEN: With the introduction of David Yates, the franchise not only takes on a darker tone, but gets a second wind of sorts. Before the film came out, there was a sense of how they were going to pull it off. Yates wastes no time cutting the family friendly tones of the previous efforts (with exception of "The Prisoner of Azkaban," which Yates has cited as the previous film that he most enjoyed) and embraces the the dark elements of Rowling's storytelling, creating almost a new era in "Potter" films. Harry, too, becomes a much more realized character and Daniel Radcliffe, as Kieran notes, takes a tremendous step forward. The only thing that really holds the film back is the content. Despite a marvelous battle in the Ministry of Magic, I've always found "Phoenix" (as Simon said) lacking in content and anti-climactic. No matter how far inside Harry Yates and Michael Goldenberg (this was the one film not adapted by Steve Kloves) take us, there's not enough externally to make the film riveting. Rating: 8/10