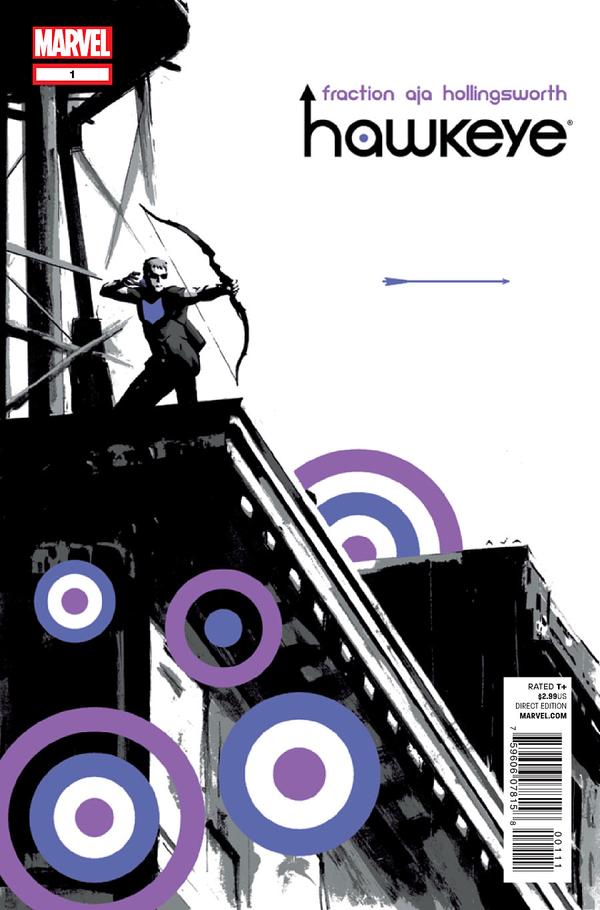 Hawkeye is the newest solo series that Marvel has released this week. I was pretty excited to pick up this issue and was highly anticipating this series. But will this series be as good as Daredevil and other solo series?

The cover for this issue is probably the best I have seen in a while. The art is amazing, and the cover is one of the many reasons I was really excited to pick this issue up.

In this issue, we see Hawkeye in his everyday life as Clint Barton. We see how kind a person he is, and how he wants to protect the innocent even if he is not in his Hawkeye costume.

This is one of the best comic books I have read in a while. Instead of a story with Hawkeye, we actually get to learn who Clint is. We can see Hawkeye in action any time when he is fighting along side the Avengers, but with this issue we learn what Clint does on his down time. He is a good guy who likes to help the innocent.

The one thing I was scared of going into this series was Marvel just making this series because of the success that the Avengers movie had. Some times Marvel likes making series just to make money, and not because the story is good. But Hawkeye is not that type of series. This series brings a great story to the table that makes you love Hawkeye’s character. Even if you have never read anything with his character this a great jumping on point.

We got to see where Clint lives, and how he lives. He is not like other Avengers who are rich like Iron Man. We get to see he is normal guy who wants to save the world as an Avenger. He becomes a very relateable character. He does everything in his power to try and help.

I really hope for future issues they balance the life of Clint and Hawkeye, even if they have one issue just about Clint and the next him fighting crime as Hawkeye. I know that in the next issue they will be bringing in Kate Bishop. So, I wonder if they will bring more supporting characters to the series. It should be interesting.

Even though I loved the story the art is pretty great also. It is darker art than most series, but it fits. As you can see in the scan above. It is not abstract, but simple. It is very easy to start reading this issue, and start to enjoy the story. I am excited to see more from this artist in the next couple of issues. He does a great job for Hawkeye.

This is a series you must pick up. I would put this series right next to Daredevil and Captain Marvel. Even if you have never have read a comic with Hawkeye this is a series worth picking up. Matt Fraction makes this comic perfect for new readers. I can't wait to see what issue two has in store for us.