The second issue of the “The Fury” is out and it falls a bit short of the greatness of the first issue. It’s still a well told story with amazing art, but this middle issue is just that… the middle. The greatness of the issue is the battle between Hellboy and the Dragon that runs throughout the entire issue. It literally starts on page seven and goes to the end of the issue ending in a Dragon Ball Z-esc cliffhanger.

Alice, the red-head that’s extremely close to the action has become scared and confused. The old woman running the Inn that she’s staying out is full of information, mostly due to the fact that she’s hiding who she really is. As the woman explains that the Apocalypse is upon us, we’re shown Mignola’s and Fegredo’s versions of the four horsemen. They are simple and realistic looking and yet very chilling, they engage in battle with the dead warriors that were summoned up in the first issue. 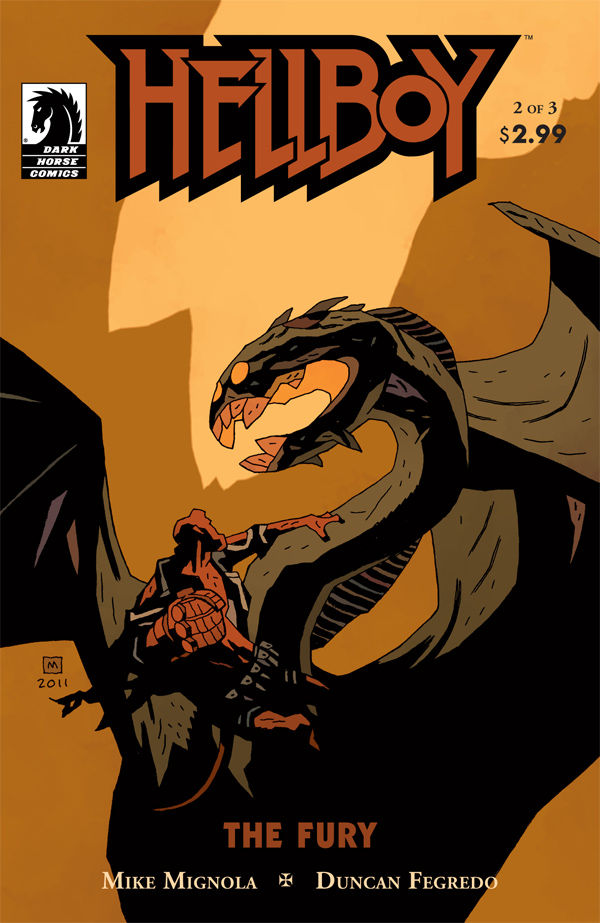 The battle between Hellboy and the Dragon rages on with a narration from the Dragon. The narration is decent as the Dragon explains how old it is and basically that Hellboy doesn’t have a chance at defeating it. The narration fails at some parts as Hellboy responds to the caption boxes of the Dragon making it seem more like a long winded speech that’s being given. At one point Hellboy yells, “Jeez! You gotta shut up!” and I couldn’t agree with it more as the Dragon drones on.

The story doesn’t do a whole lot in this issue due to the battle. It does explain one important detail and that is Hellboy is man’s champion and he must defeat the Dragon. The story dances around Alice’s importance almost as if it’s being saved for the third issue, which is fine but I could have done without it being sprinkled in the issue so much. I did enjoy the multitude of Hellboy-verse characters like the Wild Hunt and of course the Witches, these added bonuses enriched the world and story.

The art is still amazing as Duncan Fegredo draws over half of an issue of two characters battling and manages to make every moment visually interesting. This is helped by the always amazing Dave Stewart who colors this issue and keeps the color hues changing and appropriate when the story and Fegredo’s art calls for it. Fegredo also manages to keep the filler pages of the story interesting and crams a lot of detail into each panel. The “epic” battle scene between the dead and the Horsemen’s army is a thing of beauty and really shows that this was a labor of love for Fegredo.

This issue at its core is just a speed bump until the final and may not be as good as the first, but it’s still excellent on its own merits and a great read. If you’ve been waiting for Hellboy to hit something this is the issue and the next promises to be bigger and better.