Update: All the kinks have been worked out and you can now download the file here!

Clive Barker returns to Hellraiser with the first issue of the brand new series from Boom! Studios. This is only the third time Clive has actually laid hands on the issue so it’s kind of a big deal. Pinhead is after all one of the most recognizable characters in movies, not just the horror genre. Everyone has seen him at one point in their lives and along the way Pinhead and Hellraiser became watered down like a lot of horror franchises.

The first thing to know about is the eight page free prelude to the series. This is only available on the net and will not be seen again until the series is collected. That being said you need to jump on it. We’re experiencing technical difficulties at press time so we’ve included an external link for you to download it from with the hope that we can fix the problem so you can get it directly from us. In the meantime feel free to share the link and download it as much and as often as you’d like. 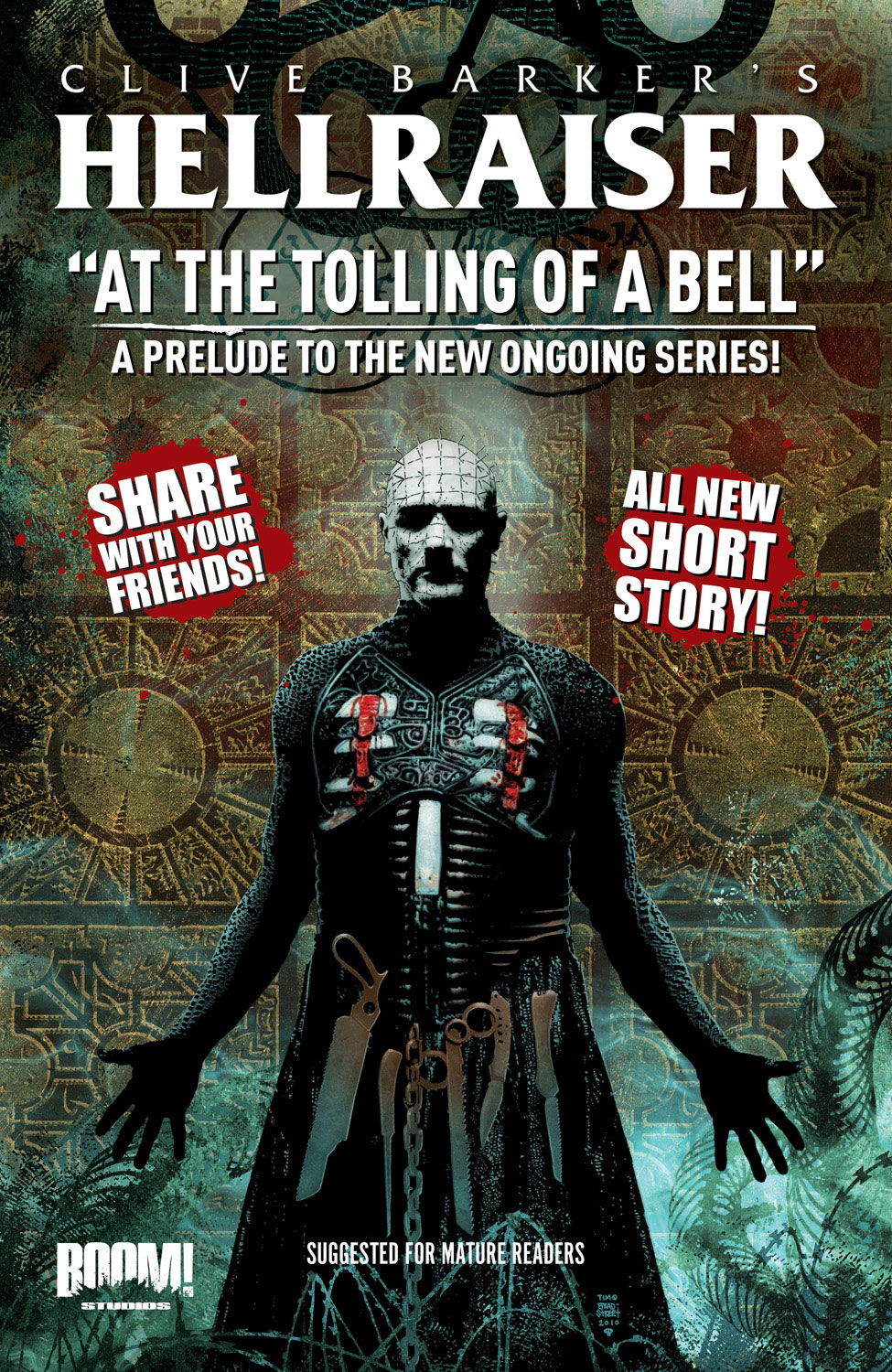 As for the story… it’s good. We start off in Nebraska as a young girl is trapped down what looks like an old Shiloh. She is scared and screaming, but also being watched by a man with a camera. The man turns the lights on in the room in which she is being kept and she sees the Lemarchand's box sitting in front of her. As she touches it a doorway opens and Pinhead and his “crew” appear behind the girl. She screams for home which only serves to annoy Pinhead. He picks up the box and unleashes the chains on her killing her and stripping her of her flesh. Pinhead leaves saying that he requires something more of the man how brings him victims.

They return to their own dimension and the Lady brings Pinhead news from above. A meddler and her group have successfully destroyed the Music Box and sent two of their order into the Abyss. Pinhead is amused by this since the “meddler” is the only thing that surprises him anymore. He walks to the forbidden mouth piece of Oblivion to make a deal within. The Lady warns him and asks him not to go in, in her own way she says that no good can come of it.

Pinhead enters anyways since his life is a torture that has become boring. Inside he plays a twisted organ made of bodies. He requests an audience with Leviathan and League. He is denied his audience, but the organ will hear out his offer. Pinhead wishes to invoke the accord which gives him the chance to return as a man and seek the redemption of heaven!

I will say that I’m not a huge Clive Barker fan; I am familiar with his work and respect what I know about it. There are two things I understand though: 1) Comics and 2) That a creator return to a series and characters after such a long absence is very, very important. 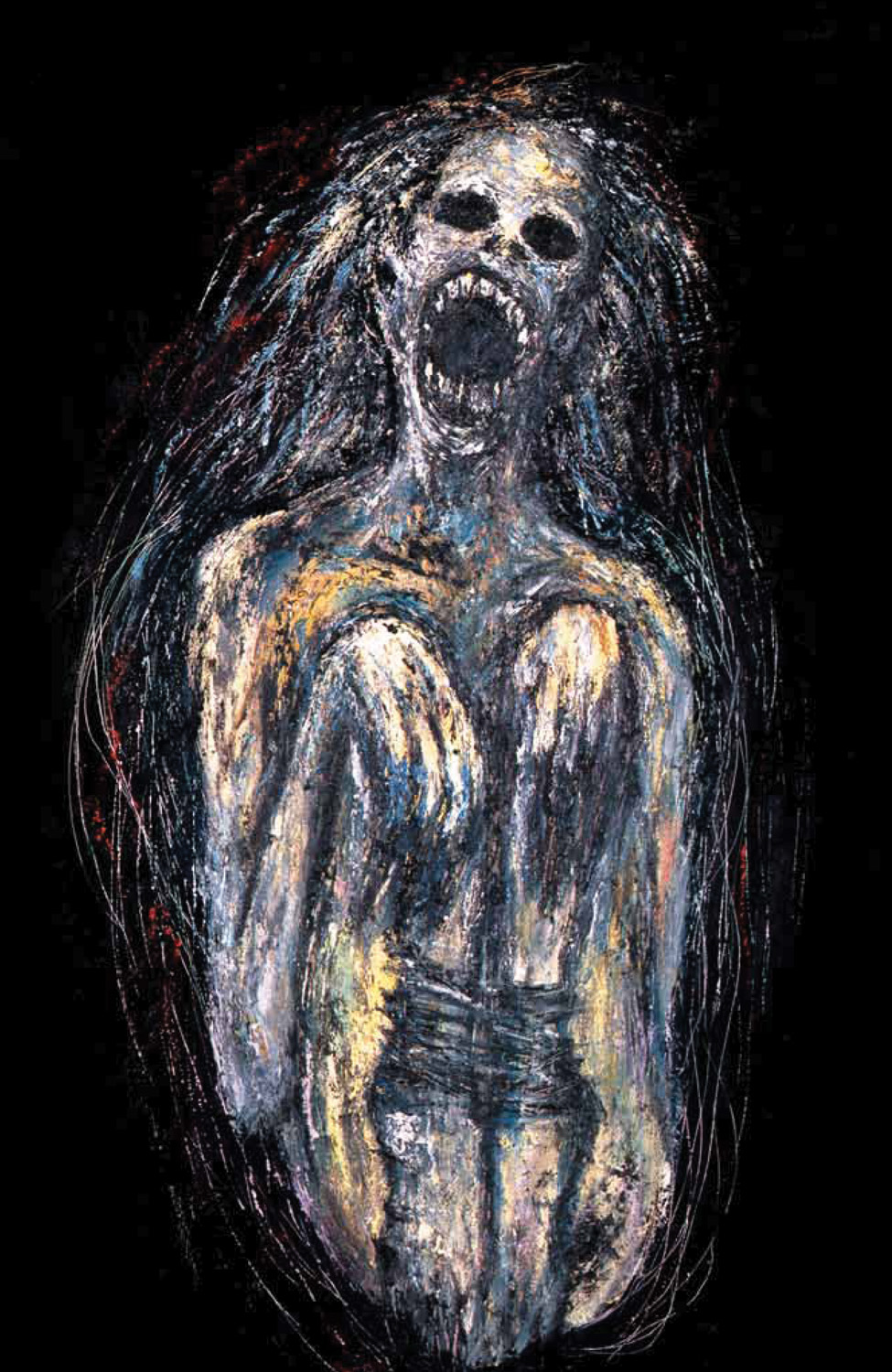 That being said I really liked this book and hate saying that it has something for everyone, but it really does. First time readers will be treated to a very complete story that has a strong three part structure. People more familiar with the Hellraiser series will get the same experience with a little bit of chills when older characters are brought up. Die-hards are sure to get everything they want out of this story and be left waiting for more.

The issue was mainly dialog, but Barker and Christopher Monfette do a wonderful job (there’s a horrific pun in there somewhere) of crafting interesting and enthralling dialog. They do a great job of capturing the characters and I do mean ALL of the characters. This is truly one comic that reads like a movie. I will say that at least in my understanding, Barker clarifies that Pinhead is indeed in Hell and not just from a demonic dimension.

The art is very different, especially different from anything else put out by Boom! It works to give the world a gritty real feel that is horrific (there it is) to look upon. Artist Leonardo Manco is a very strong visual storyteller and the perfect choice for this project. His gore was not too over the top, but just enough to make the scene gruesome.

It’s worth noting that there is a sixteen page special at the back of the issue reprinting an older Hellraiser comic that will be collected into Hellraiser Masterpieces. The backup story is actually very good and fits the new story. With a few exceptions in the art the story really stands the test of time. It made me interested in finishing the story and gave me a little of what to expect from the reprinted collection.

If you’re a fan or horror movies or comics this issue is a no brainer. In fact you’ll probably won’t to collect all five covers and to that I say… good luck! There are two covers each by Tim Bradstreet and Nick Percival with a rare cover by Clive Barker himself. I enjoyed the issue a lot. It’s great to have a good horror book in comics and even better to have it be a known horror franchise. Rest assured the characters and story are being handled very well and I’m sure the world is waiting to see what’s in store next for Pinhead and company.