By: Justin Moody | Comic Reviews | August 4, 2010
It's been over five years since the issue one of Henagi the Ninja Girl first shipped, but it was only recently I discovered it as I was walking down the aisles of the small press area of comic con. That is after all how one finds hidden gems like Henagi.

If the title didn't give it away the book is about Henagi, a young girl that is daughter of a famous ninja and the granddaughter of the village leader. Henagi is anything but responsible and in fact is known more as a trouble maker in the village than anything else. The story begins with Henagi and her childhood friend Yumi practicing their ninja skills. Yumi is very serious about her training; unfortunately Henagi would rather sleep than train.

Yumi scolds Henagi for not taking the training seriously, but Henagi counters saying that she too looks un-ninja like for scolding her in public. After a run in with some Samurai named Sam and Rai, the girls head back to the village. There they run into another childhood friend Zein. He hates Henagi for embarrassing him in front of his childhood crush. Henagi de-pants him in order to escape a shop keeper chasing her for shoplifting. 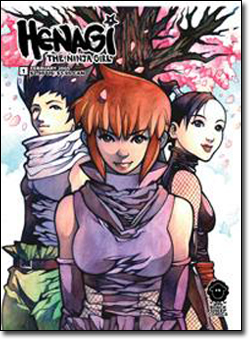 The world of Henagi borrows from every Manga and Anime formula out there, but it does it right. Yes, Henagi is the typically reluctant hero with a bad streak. And Yumi is the straight man that must always put up with Henagi and save her from herself. Zein is the typical bumbling fool that, while very competent, will always fail when near Henagi; but formulas work for a reason.

Benjamin Seto wonderfully crafts a world that is familiar but also his own. For an indie book it sure didn't read like one. This seemed like a polished product imported straight from Japan. Seto does a great job of giving each character their own personality and truly their own voice. While reading the book it felt like an animation so much so that I could practically hear their voices see their mannerisms being acted out.

Seto is also the artist for the book. His pencils and inks are spot on with the Manga/Anime style that the book has. He uses the typical exaggerated features when the characters are yelling and the overly dramatic sound captions to personify the action of the page. Most notable thing about the book is the sere amount of detail to the art. Again this book looks like a very polished product and not the first issue of a series.

You may not find this book hidden on the shelves of your local comic book shop but you can find the first issue for sale at blacksheepcomics.com/shop. There, Mr. Seto walks you through the order process and has other series available. I would recommend asking him about the second issue since it was available at the con and was twice as thick as the first issue.

Henagi may be a few years old but it is still very relevant in today's Manga/Anime market and is frankly a lot better than half of the books stocking the shelves of your local Borders or Barnes & Nobles. Maybe if enough people contact Mr. Seto we can see further issues of Henagi in a Scott Pilgrim type format.

Yeah we cover a lot of major comic releases on the site, but personally I'm a fan of the smaller press. For more suggestion on what indie books you should be reading ask in the comments section or tweet at Dustin on Twitter.