The great thing about this issue is that it’s hard to tell if it’s part of a six issue story or if it’s just a part of something bigger happening in the series. So often in comics from Marvel and DC the writers write for the trade paperback meaning they have six issues to tell their story. With the second issue of Herc there is a real conclusion to the first part of the story. Elements of that story will continue, but there was real resolution in this issue which is rare in modern comics.

This issue continues the battle between the new Hobgoblin (much better than the old one) and Herc. Hobgoblin really steals the show in this issue with his crazy dialog and ridiculous nick-names for people. He even insults the Kingpin with no consequences and frankly if Marvel plays their hand right they could finally have their answer to the Joker. The battle takes up most of the issue until Herc defeats Hobgoblin on a live internet broadcast and announces his protection of the neighborhood and its citizens. The Kingpin, being no dummy himself counts his losses and stops any attempt from buying the man’s restaurant/bar that Herc originally protected. Herc makes the bar a popular hot-spot with his presences and his true villain is revealed by the end of the issue. 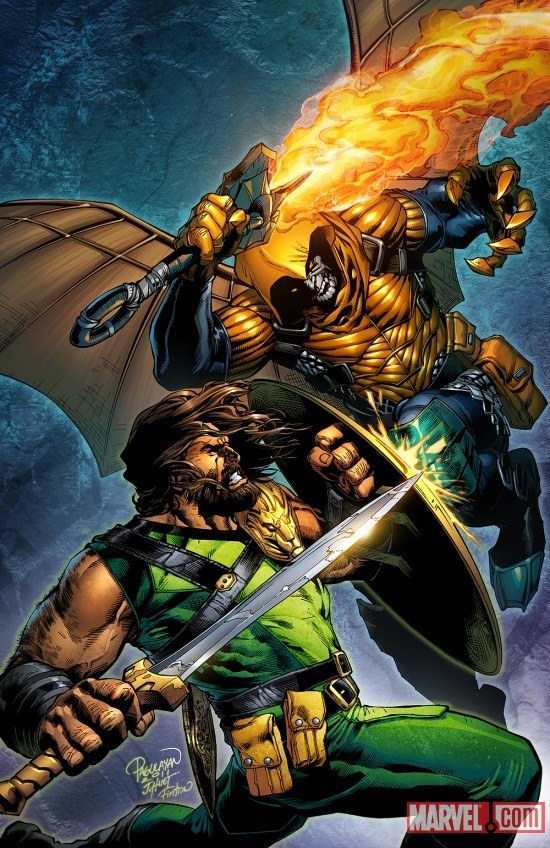 This is one of the best super-hero books on the market and it’s because it doesn’t do anything like the other books do. Herc is not perfect and doesn’t pretend to be. He drinks and womanizes, but always tries to do what’s right. Also he’s not afraid to kill and almost took Hobgoblin’s head. Pak and Van Lente weave a familiar tale that is not the most original, but the characters and their interactions are what make it good. You want to hate the Hobgoblin and root for Herc. Also you’ll find yourself liking the Kingpin for the first time in ages as he actually acts like a smart business man willing to do whatever it takes to get what he wants. Not some Bond villain that’s trying to ruin Daredevil’s day.

Neil Edwards and Scott Hana make a great art team that really captures the characters and their emotions. The facial expressions are what really stand out, especially Hobgoblins as he has a wide range of expressions that add that extra dash of humor to his dialog. There’s a great panel where Hobgoblin is licking his teeth and looks very menacing. Then another full page of Herc shooting a bow and even though it looks like an awkward stance it’s very detailed and becomes a striking page.

It’s not too late to jump onto this title; especially with a handy recap at the beginning of the issue telling you what you missed in the first issue. If you like strong guy characters, but find yourself tired of their ridiculous color changes and want a superhero book that feels different than check out Herc. You won’t be disappointed by the amazing duo of Pak and Van Lente as they continue to revitalize Marvel’s C-list characters.