Fans of fighting games who have purchased Ultimate Marvel vs. Capcom 3 have an extra reason to be joyful this holiday season, as one of the modes which was highly touted during the months leading up to release will be patched in and released as of today.  The mode that I am referring to is called Heroes and Heralds mode, and it looks to add a much deeper single player experience (in both offline and online format) for those who are looking for it.  Essentially, Heroes and Heralds will have you pick a side (Heroes or Heralds), and fight enemies in different zones to gain control of those locations. 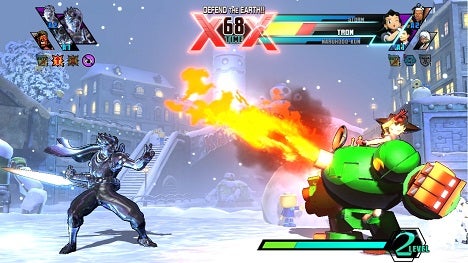 Here is Strider with the Herald Silver Sheen

As a brief aside, the faction that you choose will not limit your ability to choose your favorite characters (for example, if you choose heroes, you could still choose Dr. Doom for your team), but if you choose the heralds side, all of your characters get a silver shine to them (akin to the silver surfer, one of Galactus’s more esteemed heralds).  Personally, I think that more fighting games need systems like this, so that people who are looking to play the game, but may not be amazing at the online component have something to justify a purchase. We will all see how the reactions are once the free DLC (which will be released by the time you read this) gets into the public's hands.