By: | Comic Features | February 23, 2011
When the tough times come, the hero get packing? Wait that isn’t right! Heroes are here to the very end; they will lay their life on the line for a better tomorrow that’s what makes them hero’s right? They make all the hard choices and usually get nothing in return, but why do they sometimes give in to the circumstances? While most of them can hurl lightning, or have a million dollar battle suit, or is one of the greatest symbols of hope on the planet, heroes have given in.

Look at Spider-Man for instance. He has conquered if not all yet, but close to every bit of tragedy a hero can possibly have. His very first tragedy was the death of his Uncle Ben at the hands of a killer that he could have stopped. However, because of being young and selfish Spider-Man is the man born from that fateful day. Through and through, Spider-Man has battled poverty, family security, bad health, and death throughout his 49 years of creation since 1962. However why do heroes, like Spider-Man just throw in the towel and say “I quit” some time down the road?

Old web head has had a lot of girl friends over the years. Gwen Stacy, Parker’s first girl friend, was brutally killed by his arch nemesis The Green Goblin. While it was the sudden stop that broke Gwen’s neck, Goblin was the one who threw Gwen off of the bridge. Spider-Man swore vengeance on Goblin and promised that he would kill him. While being a just and noble hero, Spider-Man didn’t carry out on this plan however to make matters worse, Norman has done even worse things in his time. When the heroic duty of protecting continues to take it’s toll on the hero, is that a sign of quitting? 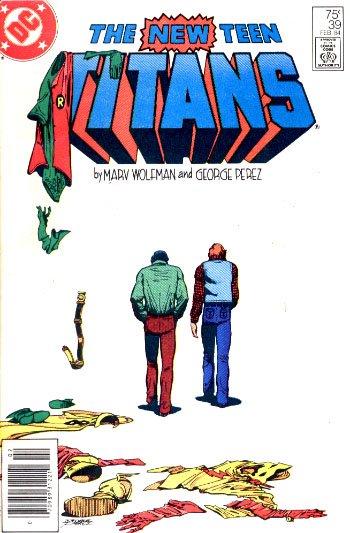 Heroes other than Spider-Man, have quit their jobs years ago. In the All New Wonder Woman comic, issue 269 was about Wonder Woman being fed up with protecting “man’s world” and wanted to leave America and go back to Paradise Island. While it only lasted one issue, it seems to me that comic creators like to use this concept for when the hero gets going. Dick Grayson and Wally West after a battle in Alaska, the two of them leave the team tired of being Robin and Kid Flash. While being teens, they left for quite a while but eventually came back as I recall.

If heroes throw in the towel permanently that means their stories wouldn’t be that interesting right? Some wanna-be's would try to replace them as the hero and eventually go crazy or something of that manner and become a super villain for that hero. Then the hero would return to face the threat and defeat it so that they can reclaim their heroic mantle. So overall heroes can’t throw in the towel just yet, they are heroes that is what makes them so cool.