"Unfortunately, The Revolution WAS Televised "
By: Zack Zwiezen | PC Reviews - PS4 Reviews - Xbox One Reviews | June 7, 2016
I barely remember the first Homefront game. What I do remember was a poorly made and linear Call of Duty clone that had a really stupid online pass. Remember those things? The new Homefront, Homefront: The Revolution is a bit different. It still feels poorly made, but instead of being linear it’s set in an open world. A boring open world filled with repetitive tasks and buggy enemy bases. Homefront: The Revolution is a really bad video game. Let’s get that out of the way. I played on PS4 and I can’t believe that Deep Silver and Dambuster Studios shipped a game in this condition actually charging people for it. On Playstation 4 Homefront: The Revolution feels, looks and sounds awful. The framerate constantly dips well below 30.  It makes the shooting feel awkward and frustrating. At times the game just stops. Whenever you finish a mission or job or challenge Homefront hangs for as long as 5-7 seconds. Every. Time. Leaving the shop menu does it too. After a few hours I was both bored and frustrated. And on top of all this the game has lots of screen tearing, texture pop in, weird lighting bugs and more. 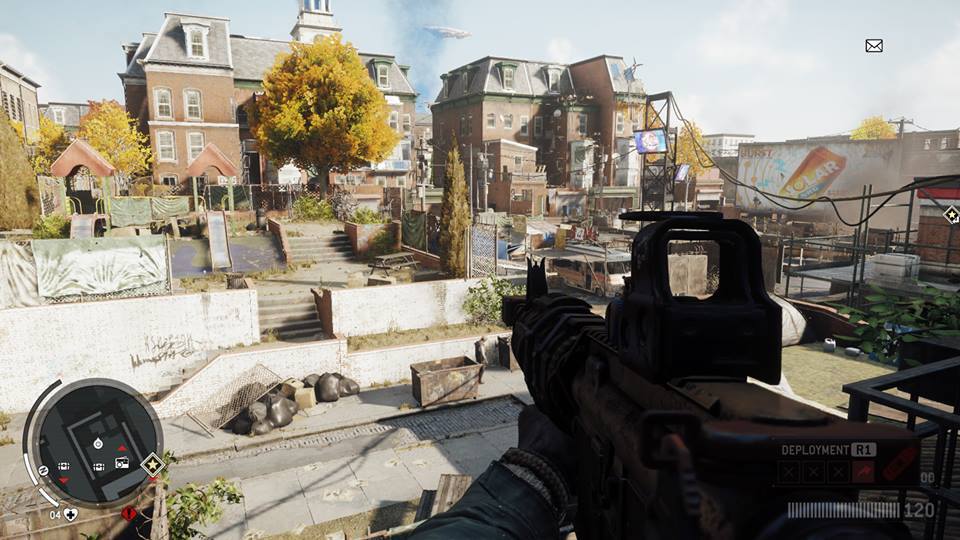 Bugs and glitches are everywhere in this game. I had enemy units spawn in a friendly base. They ran around trying to kill me and because you can’t die in a friendly safe house I just walked around talking to other characters while an enemy shot me in the face over and over. I got stuck in terrain and walls after spawning out of a mission. I had my gun disappear. I had characters die standing up or phase through walls. Random noises or sounds are common. One of the worst bugs I ran into a few times was bases or outposts that would be impossible to takeover because of enemies spawning inside a wall or something similarly annoying. Maybe if the story of Homefront was great or even good it would be worth slogging through this mess. But it isn’t. This isn’t a sequel to the first game, instead it’s a reboot. Because what the world really wanted was a Homefront reboot. 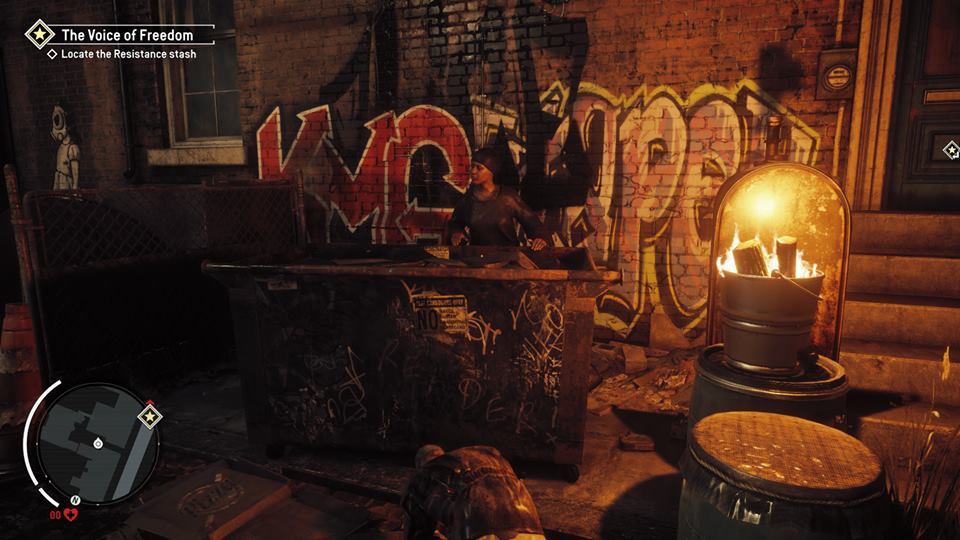 Basically North Korea in the 70’s became a tech juggernaut and over the decades grew into a large superpower that created and invented most of the world's tech toys and weapons. So think of it like this: Apple was founded in North Korea and Silicon Valley was created there because of that. The US in this alternate universe is still a large military power and needs weapons to fight their wars, so they turn to North Korea. As time goes on the US begins to spiral out of control. Wars are never ending and costing the country billions. Eventually the US can’t pay back North Korea. So on July 4th, because North Korea loves irony, the US is invaded by North Korean forces and the country crumbles. Now North Korea is in charge and they aren’t very nice to those living in the US. So a small group of rebels are trying to fight back and start a Revolution. All of this is explained in the beginning of Homefront: The Revolution. The actual plot of the game is about saving a rebel leader. Or something. The story is mostly yelled at you by a bunch of characters you meet in a very short amount of time. The game throws four or five characters at you and quickly says “Care about them! Learn their names.” Then after that most of the characters contact you via phone texts or the radio. It quickly led to me feeling like I had no idea who these people are or why I was doing what they asked me to do. And weirdly the character you play as, Ethan Brady, is a silent protagonist. Characters would yell about the revolution, about freedom, about fallen friends and Ethan Brady just stands there. Just stands there and listens while holding his gun. I don’t even know why people were asking me questions or talking to me, I’m just some silent dude who kills stuff. I don’t care about the revolution. 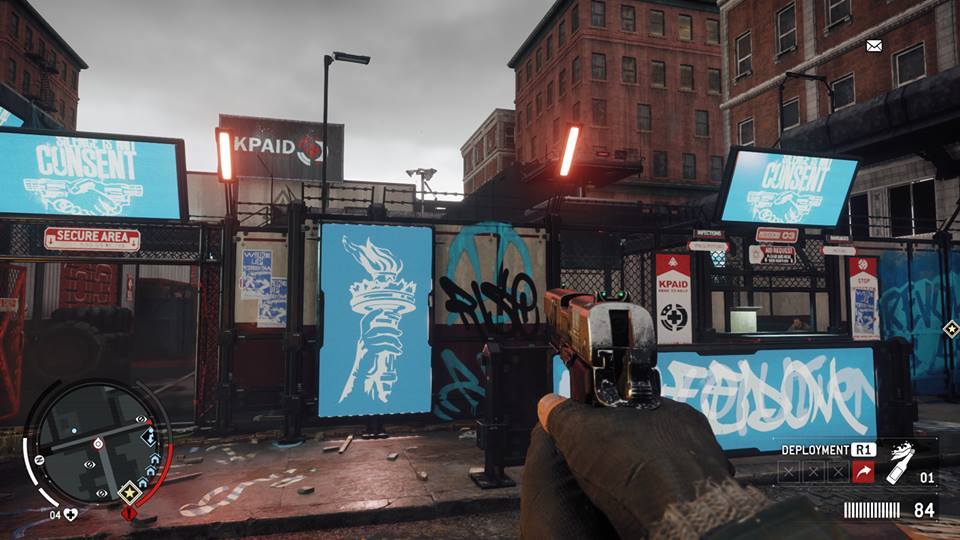 That’s the biggest disappointment, the revolution itself. It never feels like you're a rebel fighting back against a deadly and powerful army. The people never seem truly desperate and the battles are usually empty and boring. This is a revolution in name only, there is no spirit or personality to it. Throughout the world you’ll see Banksy-like graffiti imagery. Stuff like a kid with a gas mask or “Wake up America.” The most bland and uninspired imagery. I just never felt like I was part of a revolution that was actually upset or fighting back. Everything in Homefront feels emotionless and hollow. A lot of that is because the actual gameplay of Homefront: The Revolution is just Far Cry, but in an urban environment. Which could be fun, but not here. Instead the city of Philadelphia is just an empty and barren wasteland of reused textures and props. There are bases you can take over and places you can “liberate” but it all feels hollow. It feels more like I’m checking things off a list than actually fighting back against an invading army. Actually fighting that army is the worst part of Homefront. The AI is abysmal. Enemy troops run into walls, get stuck in doors, jump over cover right in front of me, even running backwards at me sometimes. Most missions in Homefront have you taking on groups of enemy soldiers and the AI doesn't make it fun to fight. Winning doesn’t feel satisfying at all and neither does the combat. You are really quick to die. A few bullets and you go down. So you spend a lot of time running behind walls or into buildings then waiting as the idiot enemy soldiers charge in one by one, almost asking to be picked off. You can upgrade your weapons and your character, but Homefront: The Revolution isn’t fun or interesting so it doesn’t really matter. I didn't finish Homefront. Maybe if the performance on PS4 was better and the enemy AI was more enjoyable to fight I would of slogged through. But as it is now, Homefront: The Revolution is a mess of game that isn’t worth your time or money. 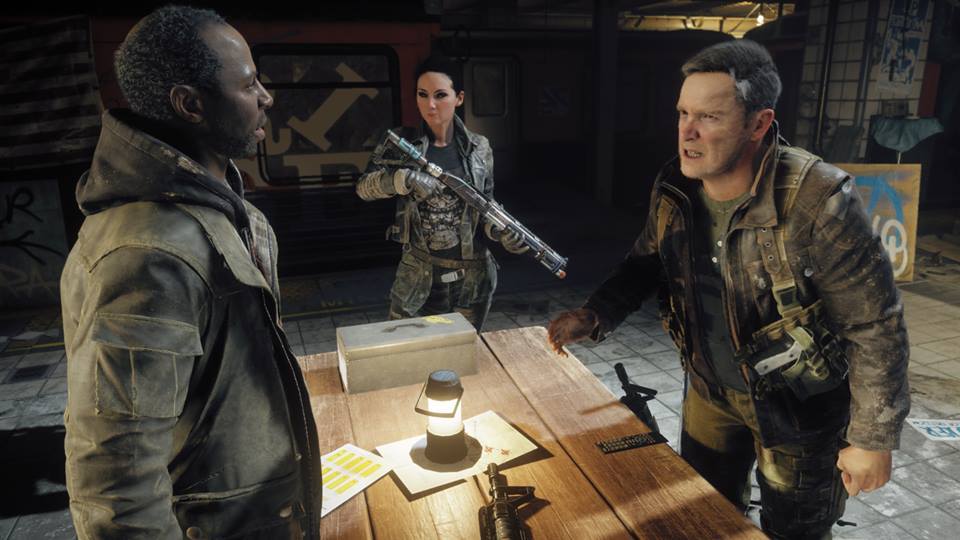 It looks bad, runs poorly, feels like garbage to play and has a story that is thrown at you with no real interest in you caring about it. I tried to play multiplayer co-op but couldn’t find anyone to play with.  But that seems like a good sign. It means that hopefully not a lot of people go tricked into joining this revolution. Tune out, Turn off, Drop everything and run from Homefront: The Revolution.
Rating
1.7
Pros