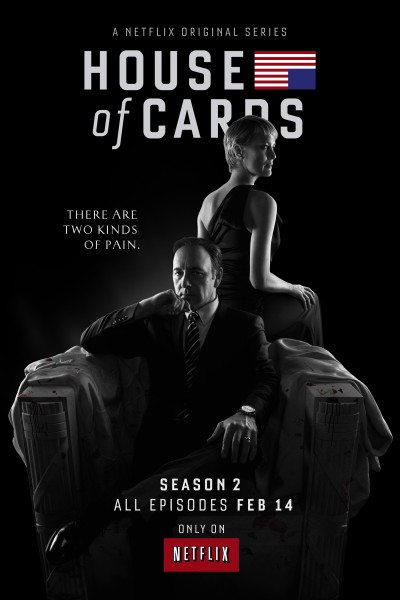 The second season of House of Cards is almost here, so it is time for brand new promotional material. In the debut season’s last moments, Underwood had just manipulated his way to the vice presidency and the sophomore season, which premieres on February 14 in its entirety, seems to follow him into his new post but focuses on the journalistic investigation on his shady dealings that threatens his standing. The just released trailer is everything you thought it would be, lots of Spacey addressing the camera with quippy dialogue, lots of threatening exchanges and clichés (“Am I really the sort of enemy you want to make?”, “There is but one rule, hunt or be hunted.”), Robin Wright looking eerily stoic and fabulous, and shots of people with serious looks on their face, all underscored by an ominous soundtrack. The trailer gives the impression of a loaded season, full of numerous story threads and mysteries, it certainly paints an intense picture.

While it is debatable if the Netflix original is overhyped and overrated it is still a source of compelling, fun performances and some intriguing storytelling. Spacey seems to be having a blast as the unscrupulous Frank Underwood and when paired with Wright’s enigmatic performance the show delivers truly engaging material. Hopefully these new episodes are an improvement on its predecessors and will live up to the praise the first season never really deserved.