How I Met Your Mother – Ducky Tie

Lily’s boobs, another Barney-Marshall bet and Ted’s encounter with a Season 1 girlfriend as told in flashback — score more points early in the game for the seventh season of How I Met Your Mother. Although Episode 7.3, “Ducky Tie,” puts many of the big story lines as established by the season premiere and second episode on hold (Barney and Nora, Marshall’s new job), it continued to set the tone for what we can expect this season with equal parts hilarity and drama.

Ashley Williams returns to guest star as Victoria, the expert baker Ted dated in the show’s inaugural season, who Ted cheated on with Robin after she left for Germany. As Ted tells of their recent encounter in a series of several flashbacks, the gang gets distracted by Lily’s “pregnancy boobs,” particularly Barney, who as we know has always longed to add them to his collection of “bpegs.” Personally, it's not Lily’s boobs that catch my eye in the opening scene, but the fact that her ever-changing hair is orange-red again for the first time since Season 1.

The rest of the action takes place at Marshall’s favorite “hibachi restaurant with a Vaudeville twist,” Shinjitsu, which Barney despises. The show tends to do a good job making use of regular scenery changes such as this, effectively poking fun at part of Americana. After Barney rags on the gimmicky chefs, Marshall makes a bet that Barney can’t do all the trademark hibachi tricks (e.g. the onion volcano, the rice beating heart and catching a shrimp in his pocket). If Marshall wins, Barney will have to wear Marshall’s ducky tie that he loathes for an entire year. If Barney wins, he gets a brief second-base encounter with Lily (that she had to haggle down with Barney in a hilarious exchange). Of course any bet with Barney that seems too good to be true usually is, as he's willing to go to any and all extremes to see himself victorious at any challenge. 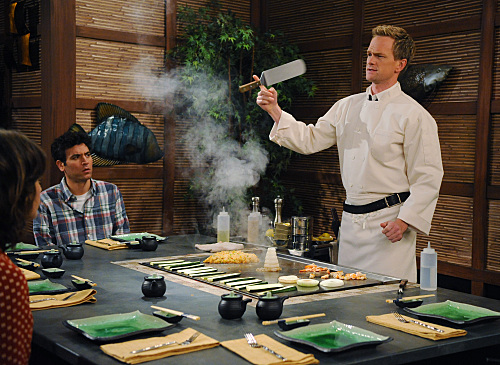 Given the complete disconnect between Ted’s story and the antics at Shinjitsu, the writing challenge of the episode comes in the transitions between the two. Aware of this, the episode writer(s) turn it into a recurring comic bit with Robin interrupting the silliness to ask Ted to continue his story. These hiccups barely sting, however, because both stories have their own strengths that while completely different, build the suspense.

I don’t think anyone thought Ted and Victoria would get back together on any kind of long-term basis, but the history made it intriguing to see what would in fact happen. The dialed-up romantic tension with Ted kind of regressing to his hopeless romantic side insisting to wash Victoria’s dishes and all went a bit further than it needed to get the point across. However, while HIMYM fans have moved on from Ted’s past and want him to find his damn wife already, the character isn’t there yet and rightfully so. We should expect Ted to play the “what if” game a lot this season and by May have finally put it all behind him, with Robin likely being the biggest hurdle on that list as foreshadowed quite effectively at the end of the episode.

Victoria’s return served more importantly as a mirror to the fact that it’s a bit strange that Ted, Barney and Robin all hang out together with no issues. Over the years, fans have seen these characters grow into fuller portraits and I doubt anyone still thinks Ted and Robin are meant for each other, but their improved group chemistry wasn’t realistic — it was very sitcom-y of the writers to pretend for the last season and a half that those past relationships didn’t happen and never revisit them, hence why it comes back now. 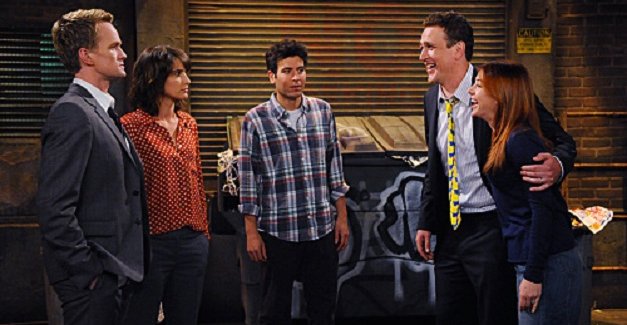 Although addressing this would suggest more significant bouts of drama in the show’s future, I suspect it will be done in a sentimental but still light and fun way; “Ducky Tie” showed us a good example how. Even though it reduced Robin’s feelings to a little awkward joke and bypassed Nora entirely, the hilarity and sentimental moments were cranked to equal levels.

Best of all, at least for fans who have seen every or most every episode, Season 7 appears intent on callbacks to past jokes and references to early episodes. Among the many we had a reference to Marshgammon as Ted and Victoria reminisce about the time they had together and the rousing return of the classic “bangity-bang” song Marshall conceived a little ways back. Although it seems exclusive and childish to pump an episode full of inside humor, the show has developed a real kinship with its viewers and these jokes are central to not only its success, but also its identity. How I Met Your Mother doesn’t need new viewers anymore: seven seasons and a contract through eight proves that beyond a doubt. Now it’s time to please the fans they’ve got. With Lily’s hair a-blazin', it should be a great season of both reflection and moving forward.