It seems like things are going pretty well lately for Howard Chaykin, the longtime comic book writer/artist. The second issue of his collaboration with Matt Fraction, Satellite Sam, hits your LCS this Wednesday. He's soon going to be writing and drawing The Shadow and Buck Rogers. There was also the recent news that Chaykin's graphic novel Century West will be printed in its entirety in English for the first time this September when it's published by Image Comics. The 64-page graphic novel was created for Disney Italia and had been available in segments in English. The original story was written and illustrated by Chaykin.

Set in the early twentieth century in the frontier town of Century, Texas, Century West centers on a trio of men who find themselves in an area far from the familiar. All three men make their way west from the east coast, landing in Texas and each becoming lawmen. The three Texas Rangers are witness to the incredible transition from Old West to modern world, but the changes are not without struggle. While the Rangers are the center of the tale, the townspeople of Century are also a big piece of the story, too. 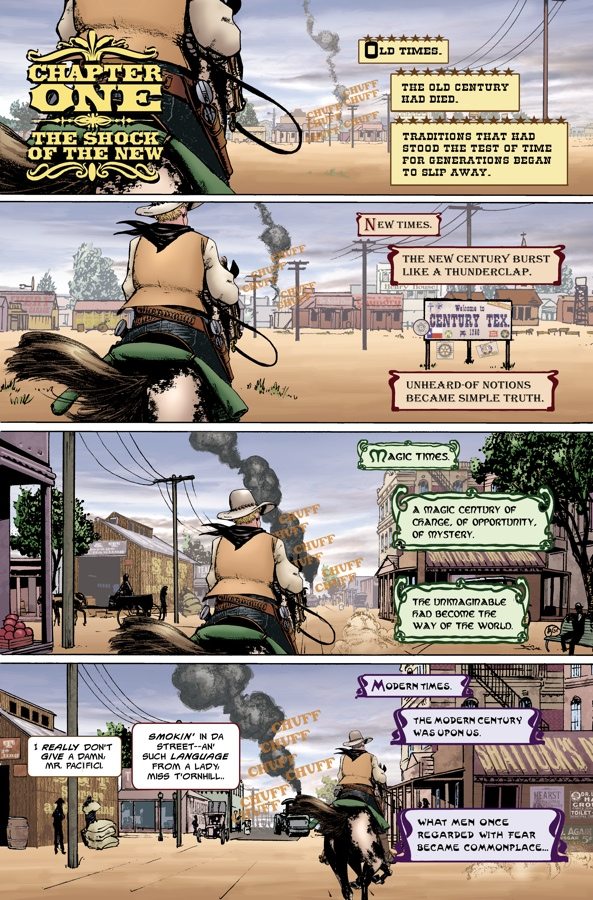 Chaykin has had a long career in comics working for Marvel, DC and independents, and he's probably best known for American Flagg!, the 1980s series that he created for First Comics. Set in the future, American Flagg! is an expansive satire that touches on politics, religion, media and many other topics. It also became a beloved cult series for many fans (and creators). Chaykin later made waves with Black Kiss, a 12-issue comic book series in 1988 that was so explicit in violence and sexual content that it was published in a black plastic bag. Now Century West covers a really rich time in American history, one that has long fascinated Chaykin. The concept for the graphic novel stems from the early 90s. Century West would also seem like a perfect read for fans of the "Blackwater" section of Red Dead Redemption video game, as it similarly explores the ideas of old versus modern and order versus lawlessness.