Hulk is a series I have always wanted to pick up, but never had the chance to pick up. But when I finally found a story arc in the series I thought was interesting I picked it up. I have started to read this series since issue 47 and I think I may stick around for the story arc. Just because this seems like a series I would not pick every issue of but, if I see an interesting story arc I will pick it up.

This issue was about Red Hulk fighting against a villain named Zero/One. Hulk gets over his head with Zero/One and will need help from, his daughter, Red She Hulk. Red She Hulk and Red Hulk will finally team up in this issue and fight against Red Hulk’s current enemy. 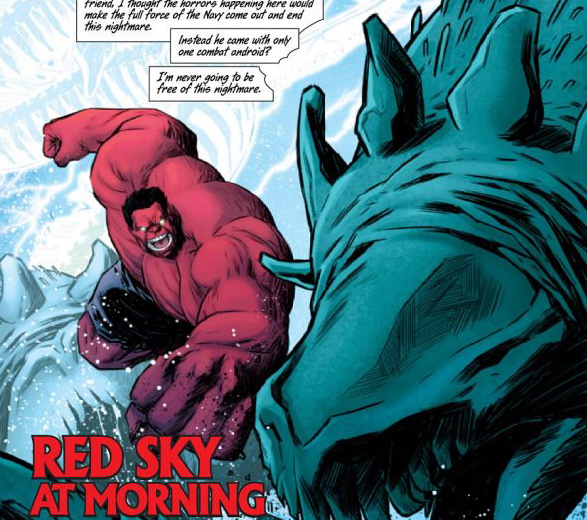 I thought this issue was pretty good. I really like that we are getting to see a possibility for Red Hulk and Red She Hulk to repair their relationship.  We have hardly seen them together since they became the red hulks. So, I thought it was interesting to see them interact with each other. In the end of this issue we see a big possibility for them to patch things up because Red She Hulk finally turns back to Betty. This could mean Red Hulk could have a conversation with Betty instead of having a conversation with Red She Hulk.

Something I did not like for this issue was the villain. I guess it is because I am not use to the mission villains that Red Hulk deals with in the series. But I felt like we should of learned more about the villain, but we only had 1 or 2 pages of her back story. It seemed in this issue that villain was less of a big threat and more of a reason for Red Hulk and Red She Hulk to team up.

I would say pick up this issue if you want to see Red Hulk and Red She Hulk interact with each other. Issue 47 and this issue are great issues for interaction with both these characters.  I know I will be picking up the next issue to see how this story arc continues. I do not know if I will continue this series ,but if I see another interesting story arc I know I will be picking it up.