By: Max Alborn | Movie Features | March 22, 2012
Kids killing kids makes for a spicy enough tagline, but it can't hurt if the characters at the core of your story have a little personality or at least possess some trait(s) that makes audiences want to know more. Our guide to The Hunger Games continues this week with some insight to all of the main characters.

Every game needs players and The Hunger Games doesn't lack for a colorful ensemble. Ranging in age, histories, abilities and motivations, the first entry in Suzanne Collins' trilogy is only getting started but it does get (most of) the main players set for the bigger game. 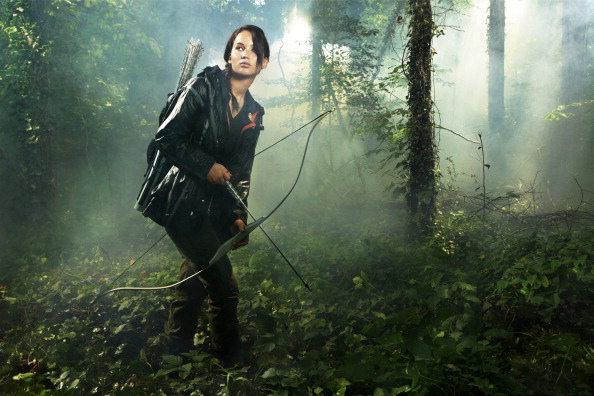 The protagonist of the series, Katniss Everdeen, lives in the poorest section of District 12 with her mother and little sister, Prim. After her father died in a mining accident, she became the provider of the family due to her mother’s crippling depression. At 16, she is an accomplished archer, trapper and smuggler—hunting illegally with her best friend Gale Hawthorne while trading goods on the black market. Far from a bubbly personality, Katniss often comes off as cold and/or rude but is a survivalist at her core, frequently putting herself on the line for others. Volunteering to take her little sister’s place in the latest Hunger Games would be the prime example. (Played by Jennifer Lawrence.) 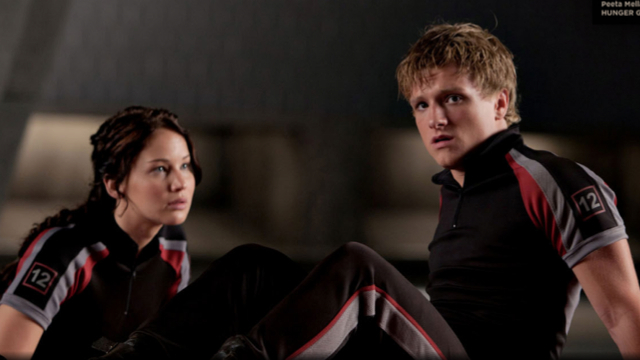 The District 12 male tribute in the 74th Hunger Games, Peeta is a fellow classmate of Katniss. The son of a baker, he has never known desperation like the Everdeen family and has spent his life working in the family shop. He lacks the weapons proficiency Katniss has, but makes up for it with his social skills. He is able to sell both himself (and Katniss) to potential sponsors of District 12. Outside of his social media prowess, he also displays an aptitude for camouflage and wrestling. (Played by Josh Hutcherson.)

Despite his relative absence in The Hunger Games, Gale is still a main player in the overall story. A fellow hunter and best friend to Katniss, his father was killed in the same mining accident that took hers. Like Katniss, Gale became the provider for his own family and taught her how to set traps. He is frequently heard voicing his dissent against the Capitol and often suggests to Katniss that they should run away to the wild, though both of them agree they could not leave their families. When she enters the Games, Gale is tasked with looking after her family, ensuring they don’t starve. (Played by Liam Hemsworth.) 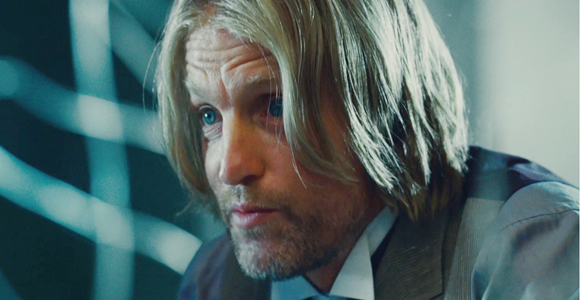 In all 74 editions of the Hunger Games, there have only been two times where a tribute from District 12 has walked out alive. Haymitch was the last. As a result, he has acted as the mentor of all District 12 tributes for over 20 years, with Katniss and Peeta being his latest. Frequently drunk and the subject of many jokes across the nation, Haymitch spends most of his days in seclusion until the Games start again. He is not only responsible for preparing Katniss and Peeta for the tournament; he must court wealthy sponsors on behalf of District 12 to give his tributes an edge against the others—often in the form of gifts within the battlefield. (Played by Woody Harrelson.) 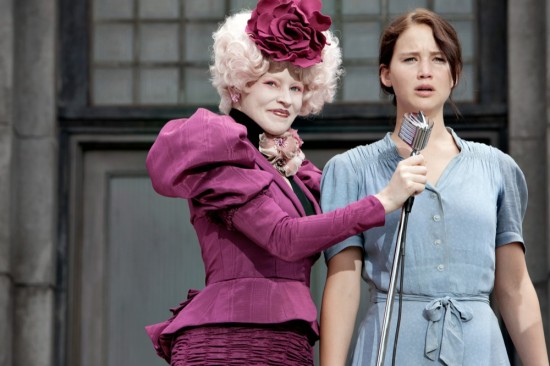 A Capitol-born delegate, Effie is sent to District 12 every year to carry out the Reaping, a lottery in which tributes are chosen for their respective districts. She is responsible for advising tributes on their public image and coaches them on how to interview, dine, etc. Like many from the Capitol, Effie is visually flamboyant and nearly oblivious to the poor conditions of many districts. She sees her appointment to District 12 as a slight and often notes how she wishes to serve a “richer” district. She frequently clashes with Katniss and her cold demeanor and admires Peeta for his ability to put on a show for the nation. (Played by Elizabeth Banks.) 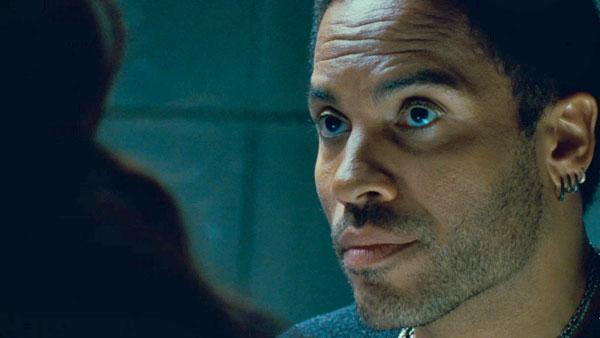 Cinna is a Capitol-born stylist serving his first year in the Games. Specifically requesting District 12 for the challenge of it, he is in charge of Katniss’s public appearance. Despite being her individual stylist, he often collaborates with Peeta’s stylist to create matching outfits that represent District 12—all of which play to the element of fire due to the district's coal-mining role. Unlike many Capitol citizens and despite his profession, Cinna does not have a lavish appearance and displays a heightened awareness to the struggles of the outer districts, quickly becoming a confidant to Katniss in the events leading up to the match. (Played by Lenny Kravitz.) 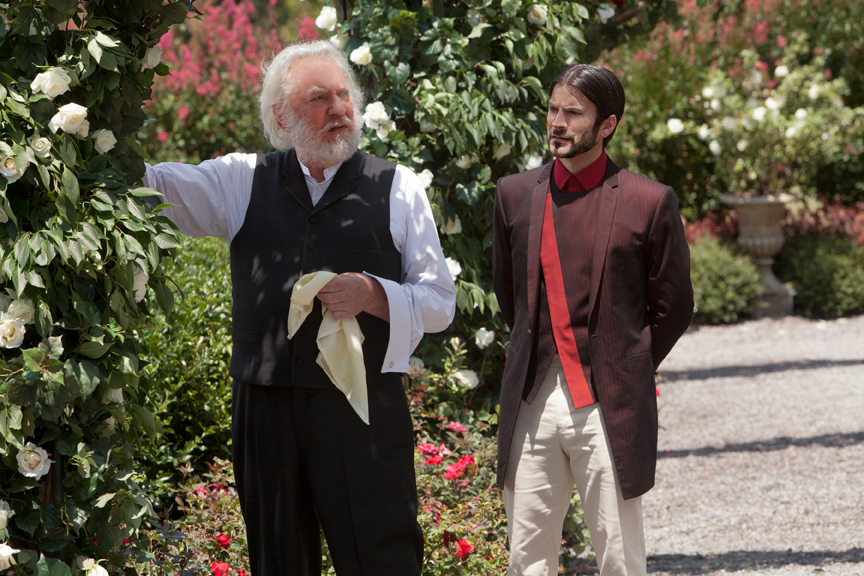 While largely absent from the first entry of the series, Snow's lizard-like presence is still strong throughout the Games. The authority within the Capitol, his grip over the districts is without mercy and carried out through (subtle) blackmail and violence. Snow even shows a capacity to act against his own Capitol-dwelling citizens, strong-arming the Gamemakers in an attempt to manipulate the latest Games in his favor. (Played by Donald Sutherland.) 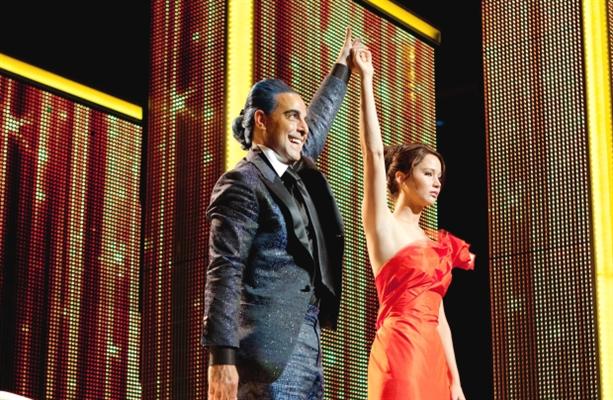 Flickerman is a longtime staple of the games, a lovable and flamboyant talk-show host who conducts interviews of all the Tributes prior to the Games. The Games are all about entertainment and PR, and Flickerman finds the angle that puts each Tribute in the spotlight and all viewers on the edge of their seats. (Played by Stanley Tucci.)

The man whose voice is notoriously associated with the Hunger Games, as he is the play-by-play announcer on televisions across Panem. (Played by Toby Jones.)