"Less of an inferno, more of a bonfire"
By: Mitchel Broussard | Movie Reviews | November 22, 2014
I was late to The Hunger Games book series when the first novel came out back in 2008. I bought it, never read it, had it passed around my circle of friends, and finally got to it a year or so out from the first film being made. It was read in a weekend. The book is straightforward and blunt (the opening chapters are an info-dump worthy of a landfill), but surprisingly deft in balancing such dark subject matter with characters running around named Glimmer and Haymitch Abernathy. Its sequel, Catching Fire, is, for all intents and purposes, a re-skin of part one. It's got the same exact structure, nearly all the same characters, all going about doing the same thing. It's like the annualization of certain video game franchises. But, funny thing is, it ended up being a better, fuller version of its original counterpart in nearly every aspect. Which is where Mockingjay comes in. From the structure to the characters to the themes, nearly everything gets blown up in the trilogy-ender. It's bold stuff, on Suzanne Collins' part. But it's also lifeless. The final book as a whole, brave step away from formula as it is, feels like fan-fiction more than canon: introvert Katniss, brain-washed Peeta, lackadaisical pace, and to top it off - an uncomfortable focus on a love triangle that's never been given much attention in the first place. 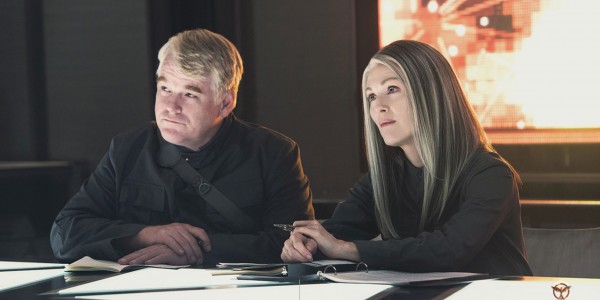 The movies, up to Catching Fire, have generally followed that upward momentum their novel counterparts had. Catching Fire, it could be argued, is one of the best stand-alone science fiction movies in recent years. Which makes Mockingjay Part 1, by contrast, also a bit of a rarity of the last few years of cinema: it's one of its biggest letdowns. Part 1 of Mockingjay picks up soon after Catching Fire's searing end. Katniss is having nightmares of the Quarter Quell, and hiding from the watchers of District 13 in a vent (the movie, in one of its smartest movies, thankfully reduces vent dwelling time to two bearable scenes). Jennifer Lawrence is as good and emotionally resonant as ever in these moments, especially when she decides to be the rebellion's "Mockingjay", relaying her conditions for cooperation to a confounded President Coin (Julianne Moore) and bemused Plutarch (the late Philip Seymour Hoffman). Even in this new environment, she's tough and ferocious and protective of her sister Prim (Willow Shields) and mother (Paula Malcomson). But, just like the book, that setting also brings about the film's biggest issue: stagnation. Katniss leaves the bomb-shelter-like catacombs of District 13 to grieve over the remnants of District 12, to shoot propaganda ads helping out refugees in District 8, and... that's it. The movie occasionally leaves the rebellion to take stock of the goings-on in the evil Capitol, but nothing much happens there, either. President Snow broods, his advisers nod auspiciously, everyone still dresses like David Bowie circa 1986. There are new things left to discover in this world, but one of the movie's biggest sins is that it makes it feel like there actually aren't any. 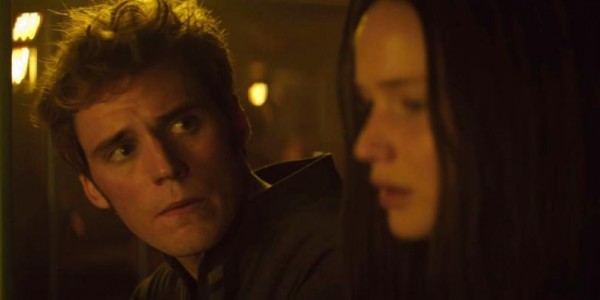 That stagnation seeps into the very structure of the movie, as well. There is, in fact, no recognizable structure here - no beginning, middle, and end. Nothing set up has a pay-off or any semblance of purpose, even. One of the few major action scenes in the movie happens about forty-five minutes in, but, like most other plot points here, it feels perfunctory. The Hunger Games movies were never "action films", per say, but by very method of existence stumbled into being them anyway, and thrilling ones to boot. So, here's an important existential question for you, dear reader: is it still a Hunger Games movie if Katniss shoots a bow-and-arrow only once? One of the new characters introduced here is Cressida, played by Game of Thrones' Natalie Dormer, and whose neck tattoo and side-buzz hair cut make every scene she's in feel mysterious and suspenseful. Despite her woefully brief screen time, she's sort of the Jena Malone of Mockingjay Part 1. She's part of a camera crew that links to arguably the biggest story thread in the movie: the manufacturing of propaganda. When it's discovered by the rebels that Katniss is a bit of a blank-face on camera, she teams up with a crew of cameramen and producers who follow her around war-torn Panem to capture in-the-moment footage in hopes of boosting the rebellion's morale. Which is a decent enough arc for a scene or two, but the stretched-thin Mockingjay Part 1 has to keep returning to the propaganda-as-drama well long after it's run dry. Katniss has been forced into horrible situations in the past because of the central dramatic crux of the series: the Games themselves. The passing of the baton from televised fights-to-the-death to glorified commercial shoots is, to say the least, undramatic. It boosts the morale of the rebels (mostly lemmings anyway, they go from wanting to tear out Peeta's throat to practically putting out streamers and hiding behind couches upon his return) but as a result, it sort of deflates the morale of the actual audience watching it on-screen. 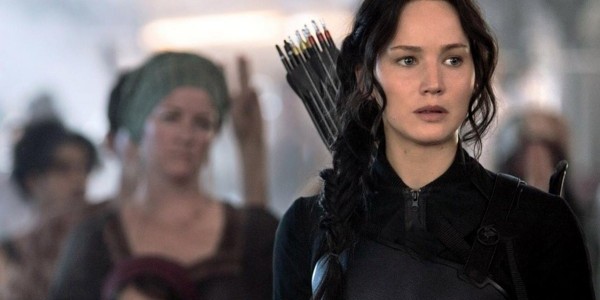 In the process it also completely negates one of the most fundamentally important aspects of that largely disappointing third book: the moral grey area. The Capitol and everyone in it are evil and District 13 and all its citizens are saints. Katniss nearly never questions President Coin once she dons the Mockingjay gear, and nor does Coin herself show any of the foreshadowing nefariousness of her novel counterpart. Moore, in fact, is shockingly soulless here, apparently attempting to match the off-the-wall tyrant of Donald Sutherland's President Snow with icy cool detachment. Hoffman's Plutarch, on the other hand, gets to show a humor he could not in Catching Fire due to plot constraints. Perhaps its his recent unfortunate demise, but he's in the movie a surprising amount, and he lends its overall doom and gloom a hefty dose of warmth. Its tediously protracted finale is the cherry on top of the give-us-our-money-now-for-Part-2 cake, and just when it starts to show promise - Finnick parlaying some down-right scandalous acts Snow forced him into back in the Capitol, Peeta's third-act reveal - it screeches to a halt. It's a two-hour build-up to another two-hour movie that we have to wait another twelve months to see. Which, of course, is nothing new in YA novel adaptations, but feels particularly futile here. 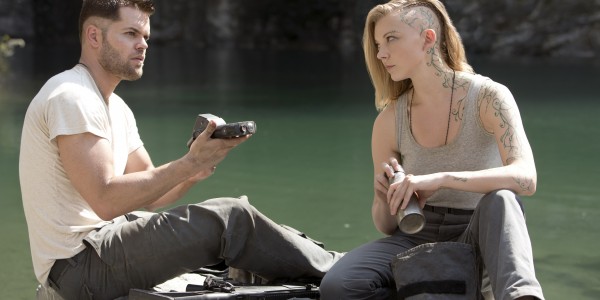 At the end of the day, the first part of the final piece of The Hunger Games puzzle is still a well-made film. It's beautifully shot and scored, and the actors filling out its ranks are all insanely game (Elizabeth Banks' de-glammed Effie Trinket is another highlight). But it also does not feel complete. Especially when compared to its predecessor Catching Fire, which required practically no former knowledge of the franchise, ebbed and flowed with the calm brutality of a stream opening into rapids, and had one of the most satisfyingly awesome fist-punch cut-to-black endings ever. It, essentially, was its own film, its own little self-contained world. It was full of interesting characters doing insane things following its own made-up but sensible logic (invisible force field walls? Sure!) and tying up - mostly - at the end. Someone could not go into Mockingjay Part 1 cold, and I cannot imagine anyone leaving satisfied, book fan or not. It's a victim of circumstance, if anything. Collins wrote these books with a specific ending in mind, and this is how the third chapter of the saga goes, not much changed in transition to film, and very little added. This is one-fourth of a major film series whose sole major plot development boils down to, "They're crazy now." It loses the bombastic flash and sure-footedness of Catching Fire and gains a cool side-buzz haircut and a running joke about a cat. Here's to hoping the fires catch a bit harder in Mockingjay Part 2.
Rating
6.0
Pros