Hunted: The Demon’s Forge is a classic dungeon crawler title that emphasizes in-depth cooperative play, and is interpreted through a more contemporary third person perspective, in the vein of titles like Gears of War. Developed by inXile Entertainment and published by Bethesda Softworks, Hunted seeks to portray a beautifully rendered world punctuated by fast action and cinematic style. Not is all well in the world of Kala Moor. Monsters have emerged from the underground darkness, demonic taint has begun to infect the landscape, and innocents have been taken for surely foul purposes. As either E’Lara or Caddoc, two mercenaries contracted to discover the source of the corruption; players must venture forth and crush any resistance along the way. Like many hack 'n' slash titles, Hunted puts a massive amount of importance on the value of teamwork. 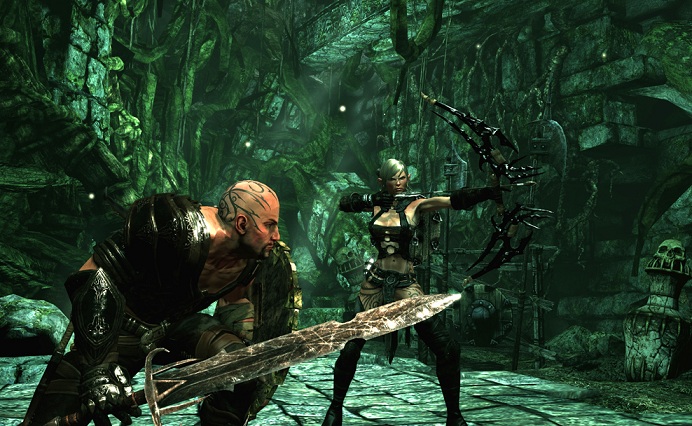 As one of the announced characters, E’Lara is an elf that relies on ranged weaponry to exact punishment on would-be foes, with buttons devoted to a lighter, combo-ready bow attack that can be spammed at will, as well as a more powerful melee attack that must be timed well to achieve optimal results. Caddoc is the rougher human fighter that acts as a tank for E’Lara as well as a devastating power striker. Shields also play a part, but rather than providing a static defense that can always is relied on, the shield degrades both in effectiveness and visual appeal (chunks break off as it takes damage); fortunately new shields can be equipped from fallen enemies at any time. 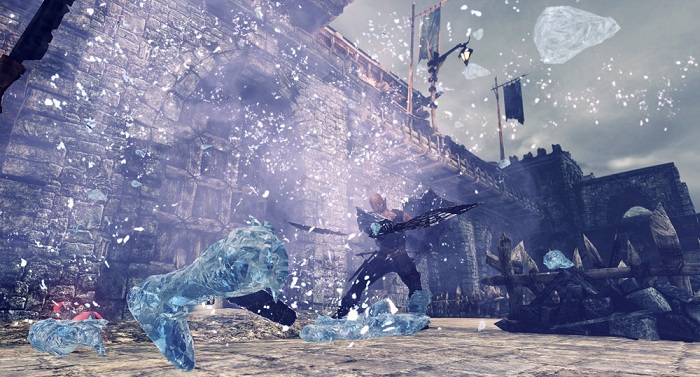 Each character has abilities that cause them to excel in their own particular field: Caddoc dominates in close-range melee combat, while E’Lara uses her Sky-Splitter to wipe out enemies from afar. However, they both hold skills that provide a great deal of assistance to each other to such a degree that success is unlikely if they are not used. Solo play becomes extremely difficult, and so it becomes imperative that players help each other to fight enemies and complete objectives. The teamwork becomes much more vital once it becomes apparent that one player must take all the punishment while the other clears out ranged threats or flanking enemies. At this point only two characters have been revealed to the public, but two others are planned to be included in the final game.

The game uses a version of the Unreal 3 Engine and it definitely shows. The detailed enemy models drip with ichor and react realistically when attacked, especially when they are darting towards you with malice in their eyes. The speed of the game is also of note: rather than following in the footsteps of older titles in this genre which generally are a bit more tactical and aware, the over the shoulder viewpoint and increased speed of enemies make this closer to the frantic combat of Call of Duty. 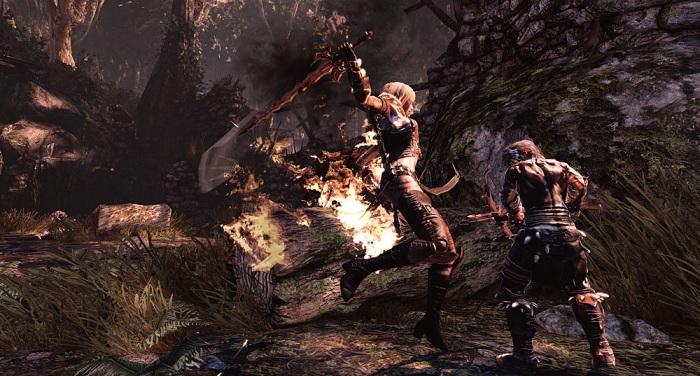 Perhaps more a natural development of the dungeon crawler than being particularly innovative, Hunted: The Demon’s Forge seeks to update the formula to match the fast and intense speed of contemporary shooters. The corrupted grimdark underground shines with character, and the strong focus on successful teamwork practically requires you have a viable partner to explore the depths if you are going to invest in this title. If you’re a fan of the dungeon crawler genre, Hunted appears to fill a niche with a modern offering. Set to be released by May 31, 2011, Hunted: The Demon’s Forge will be available on the PC, Playstation 3 and the Xbox 360.