Starting off “The Game Feast” this year is a title known as Hydrophobia. I’ve been quite interested in the game ever since I found out about it a few months back. It had an interesting premise, and just the title alone evoked a sense of mystery, though I had many doubts involving the quality of the game mainly because I’d heard nothing about it. Apart from the occasional press release, the only thing we had to go on was the eight or so screenshots released for the game months ago. There seems to be a reason for that.

In Hydrophobia, you play as Kate. She’s a rare breed, a strong, likeable female protagonist that isn’t over-sexualized in any ﻿way. The likeable characters stop there. Throughout most of the game, you have a man named Scoot talking to you through your ear. The amount of things wrong with this character amazes me, first off, his voice. The voice actor delivers one of the most painful voices I’ve ever heard. It’s a combination of British and Irish which then turns out to be some kind of accent I’ve never even heard. It doesn’t stop there though; his character chimes in throughout the game with what he thinks are incredibly witty remarks. As you can guess, they’re not witty whatsoever. Scoot is the definition of a painful, unlikeable, piece of trash character that I would love to punch directly in the face. 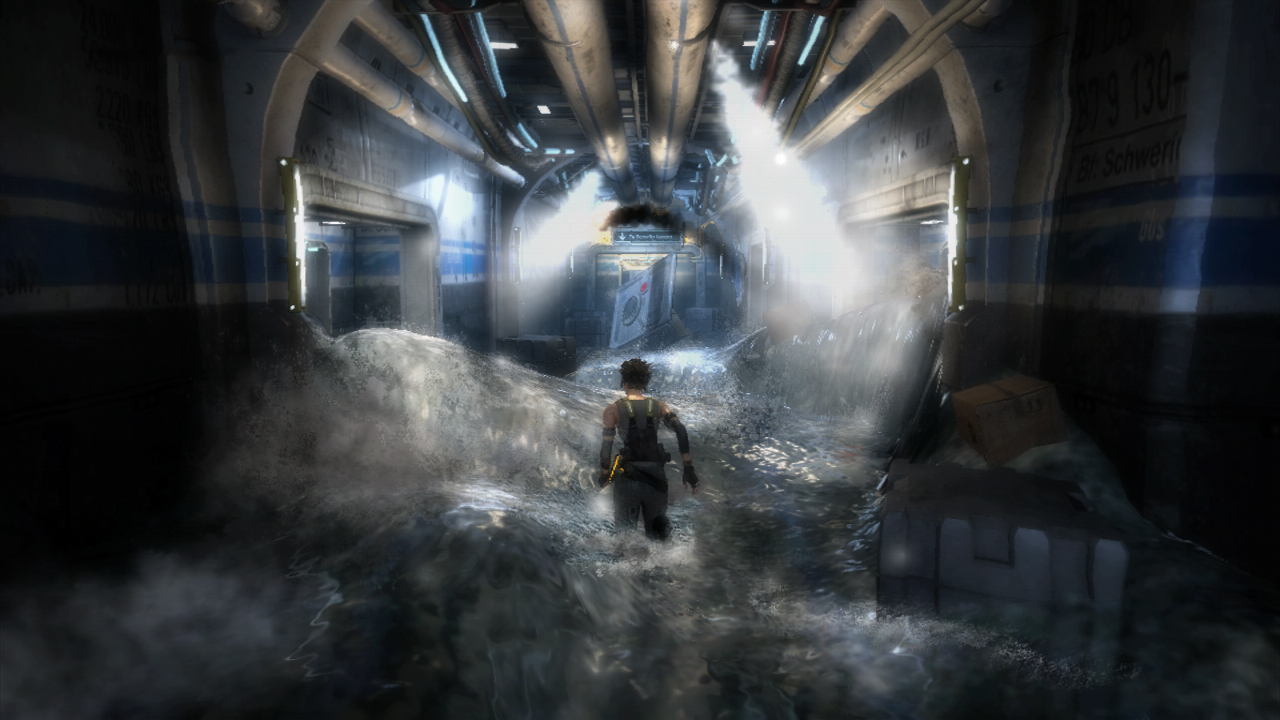 Story in Hydrophobia is something that is mostly non-existent. The Malthusians (terrorist group) are taking over a ship you’re on for some reason and you want to escape? Or something? My attention was always directly on the game yet I never could decipher this story, I had no idea what was happening throughout ninety percent of the game. There’s even a twist at the end of the game, revealing a certain person to be behind it all, where I thought “who?” And upon asking my friend who that character was, he had no idea either.

Seeing as the game is called Hydrophobia, there is tons of water everywhere. How in the world the ship doesn’t sink with all this water is beyond me. The water looks fantastic, you can tell they put quite a bit of work into detailing the water and making the physics work properly. The sad thing is it seems they didn’t put any work into detailing near any other part of the game. Except for the explosive platform section at the end, everything looks terrible. It reminds me of an original Xbox game. Since the entire game is spent on this ship, you’re going to have to explore it constantly. This seems interesting but the downside is everything looks the same. You turn a corner and you swear you’ve seen that gray wall with the water seeping through around 100 times before. Then there’s that image of the M that is plastered on walls throughout the game. It’s like the developers took stickers from Little Big Planet and said “you should stick them here.”

For some odd reason, Hydrophobia has combat. I’ve played many terrible shooters on the Xbox 360 and this one is up there with the worst. It’s clunky and tacked-on. I really don’t how you mess up the simple formula of “aim and shoot” this bad. The sensitivity is out of control, it seems like it never really knows if you’re hitting the enemy or not, and once you do shoot the enemy, it takes around ten-fifteen shots (if you’re lucky) just to kill him, unless you’re lucky enough to have the enemy standing near an exploding canister or something of the sort. Or possibly, he fell in water, and then you can run and stand on him until he drowns. Because that is always fun.

If you do love the combat though (God help you) then you’ll love the challenge room which unlocks after you beat the game. Challenge room is basically Horde Mode and Firefight but not fun. I popped myself into it for around five minutes then once I realized what it was, I bolted out of it. 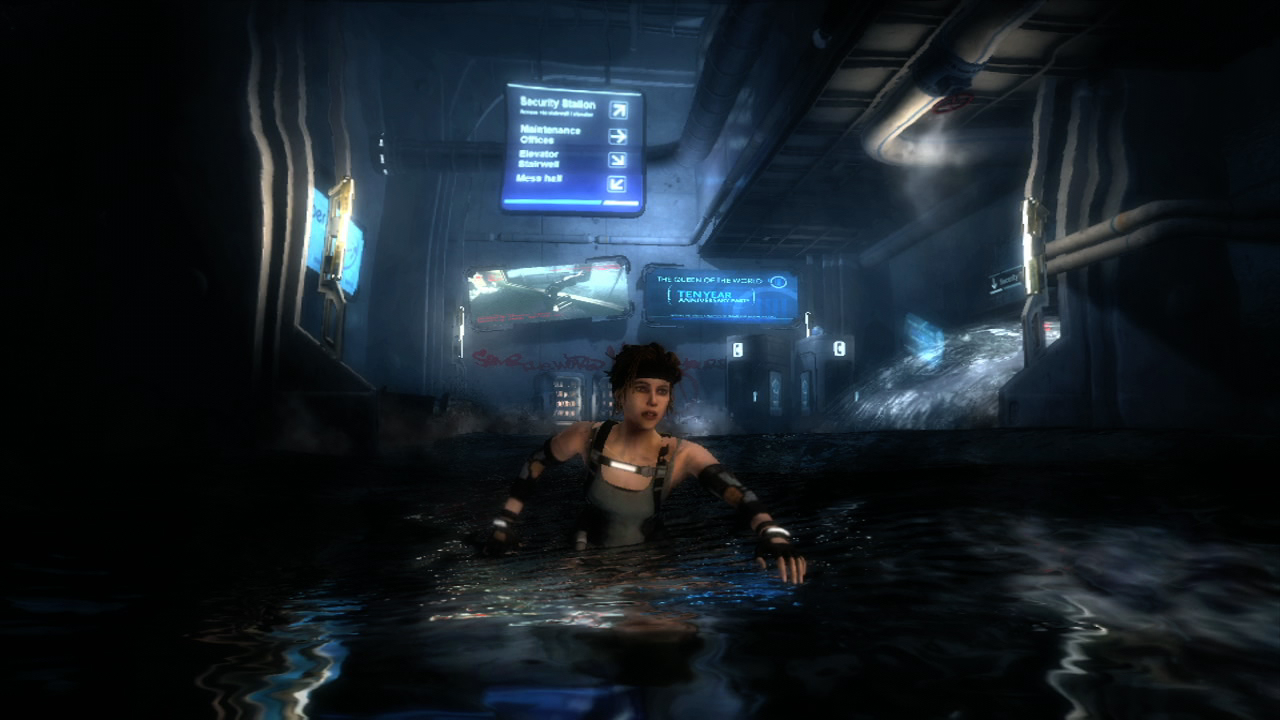 Very rarely will I find this many bugs hidden (hidden really isn’t the word I’m looking for as the bugs are so prevalent, you’ll hit them when just jumping around). I’m not sure who was in charge of bug testing/fixing the bugs in this game but they should be fired immediately. The camera is mostly OK but I did run into a few instances where I would step into a corner and have the camera completely go nuts on me and start flipping around and around. On top of that, you can get to some places you’re not supposed to access by simply leaping close to a rail. Most of the time, no matter where you are, you just kind of float in the air and you’re able to walk as far as the rail takes you. This also happens on stairs, and pretty much any climbable object.

There are three acts in Hydrophobia (with the game lasting around six and a half hours) and with that few of acts, you’d expect some mission variety. I’m fairly certain that my objective throughout eighty percent of the game was “find the key, find the cipher, open door.” The entire act 2 featured around six or so sections where I had to repeat this. Finding the cipher consists of using a tool called the MAVI and following it against walls to see arrows which then lead to the ciphers. It sounds fairly simple but doing it over seven times in a row is repetitive and frustrating.

In the end, Hydrophobia is a barrage of disappointment. It has an interesting premise and the water looks good, apart from that, there’s not a positive thing about this game. From the beginning all the way to the lackluster and lazy ending, you’ll be underwhelmed with Hydrophobia.