By: WilsonTaylor | Xbox 360 Features | March 5, 2012
I never played Mass Effect. I don't know why, I've been given every opportunity, the game is a long, deep sci-fi epic, and is a virtual rape simulator according to some hilariously misinformed news broadcasters. So why is my twitchy trigger finger nervous to hit the start button? Well it probably has something to do with my irrational fear of inventory management. With Mass Effect 3 coming out, this seems like a perfect opportunity for a study on a storyline I know absolutely nothing about.

I do know one thing: There's a spicy close-quarters xenocultural study, if you can read between the lines. Specifically these lines.
____
There's a sex scene.
____

So here we go, Commander [Insert Name] Shepard  is put aboard the N7 ship where Seth Green makes his residence and acts all quirky in the creepy sort of 'I'm not actually clever' way. Seth Green screws up somehow and his legendary sense of self-congratulatory bullcrap somehow makes the N7's turbo boosters explode. Around this time in the story that I never saw, the ship makes it home okay and some girl in a black room talks about aliens for a while. The N7 makes it to the blue planet's surface completely fine and Commander Shepard gets to walk around talking to people.

During one of these encounters, Commander Shepard, the man with a first name so cool, no one dares speak it, talks to an alien with a sharp jaw and strips of tripe hanging from his face who acts like a comeplete jerk. Either taking offense or being totally cool about it, Shepard takes note and leaves. He then proceeds to go continue onto the game's action sequences otherwise called 'dialog segments'. The Council then proceeds to discuss whether The Good Commander could ever be strong enough to become a ghost or something. Shepard then goes on a mission to a bar and dances the night away, swinging his arms with the electric energy of a barrel of especially hedonistic sloths and not moving his legs.

And then some shooting happens, maybe Shepard was dancing too hard.

The jerk alien heels it and leaves, giving the council no choice but to allow Commander Coolname Shepard full ghost priveliges. Then some more shooting happens.

Shepard flies around the universe and a lot of speaking happens and vehicle sections happen, but I've been advised to not mention these because of my fear of fanbases. Then Shepard meets a super cool dude wearing spiked sunglasses and a gun the size of Mercury named Garrus. Commander Shepard bows in respect of this totally rad dude and I'm assuming the game then flashes the title screen because the game only truly begins when Garrus becomes a part of it.

Garrus's coolness then rocks the very foundation of the game. It rocks so hard that Garrus then becomes the main playable character and at this point, I'm making stuff up, so I think it's time we moved onto Mass Effect 2.

Seth Green is still around for some mind-boggling reason. He then screws up the turbo boosters again probably because he's so quirky and snippy all the time, but the N7 REALLY blows up, Seth Green is sucked into the infinite void of space and Shepard crash lands on the planet Normandy. He probably has some snippy conversation with his teammates over enemies being sucked into horrible black infinite voids because that one Gamestop advertisement never shut up about it.

The main enemy of the Mass Effect universe then reveals themselves. The Reapers. A group of...

Actually, hang on, give me a minute for this one. 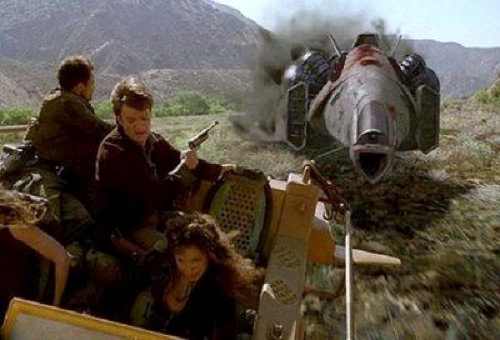 Okay, I remember that they're supposed to be really scary, so I think they're a group of space pirates that kill mercilessly like in Metroid or Firefly. Garrus is gone this time around though, so I'm assuming that the Commander Shepard brigade encountered a bunch of Reapers, who either threatened to blow up their ship or stayed intensely silent and everyone except Garrus runs away while trails of horrified urine run down their quivering legs. Garrus doesn't survive.

Except he does, because he's Garrus. He's then briefly named Archangel, but decides that the name is dumb because the only name that's not dumb to Garrus is Garrus. Garrus and Commander Shepard then blast off into the deepest reaches of space to kill Lovecraftian Horrors from beyond the furthest eyes of science. Or some resource extracting happens.

I promise to get around to playing Mass Effect.  The time I've had with the game was engaging and fun. But let me put in my hopes and predictions for Mass Effect 3:
Seth Green doesn't come back.