By: Justin Moody | Comic News | September 9, 2010
It's an Image Comics news double header today - - Mostly because I can't think of anything clever to say about the latest Walking Dead #80 teaser. More than likely I won't buy it or read it but maybe Kevin will, he's still mostly reading the title in hope that it will reclaim it's lost glory. Also the trailer to the TV show was... pretty bad. Can't say that it looked interesting at all and really showed just how much of this idea came from watching 28 Days Later. For the other half of the news we have a press release from Image announcing that Top Cow books (a subdivision of Image) will be included on the Image/Comixology app for iphones and all those "Mac" products. The full release follows with the teaser thrown in the middle for distraction!

The Image Comics app for the iPhone, iPad, and iPod Touch offers comics fans unprecedented access to the best comics on the market, and Top Cow and Shadowline have joined forces with Image Comics to make sure the Image digital catalog is unsurpassed. 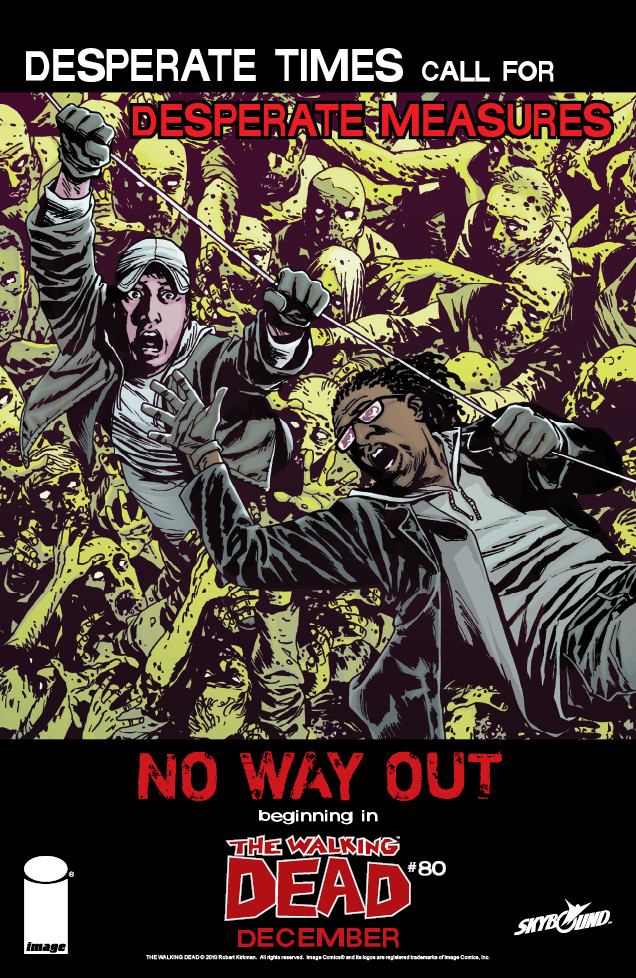 "comiXology has quickly proven to be the leader in the digital comic space," says Top Cow President Matt Hawkins. "It makes sense for Top Cow to be part of the Image app, so when Eric Stephenson suggested it, we agreed and folded our own efforts under the overall banner."

Shadowline Publisher Jim Valentino adds, "comiXology is leading the way in finding a new audience for comics with digital presentation, and I'm proud to have Shadowline's catalog hosted by them."

The Image Comics app is now available for free download from the iTunes App Store and features titles from Top Cow, Shadowline, Todd McFarlane Productions, Skybound, and Image Comics. In addition to individual issues for ongoing series, which are priced for $1.99, the app also provides issues of several popular Image titles, sneak peeks of upcoming titles, and other exclusive content for free.