Incorruptible # 16 comes out this week, continuing Mark Waid's excellent line of BOOM! books. Well...the last time we saw our hero Max Damage, his life was a mess. Alana Patel, his new ally and The Plutonian’s ex-girlfriend, has been making secret deals with a shady billionaire behind Max’s back. Max is having less impact on cleaning up Coal Ville than he'd hoped and worst of all, when THE PARADIGM -- the earth's self-appointed superhero police force tried to recruit Max, his insane sidekick Headcase,went around the bend and MURDERED ONE OF THEM IN COLD BLOOD!

As the issue begins, we see Mr. Bellamy making a deal with two sorcerers named Nebuchadnezzar and Loretta Grass, their goal is to sabotage the Paradigm's plan to save the city's water supply. After their talk, Mr. Bellamy then enters another room and continues talking to Alana. Like any normal superhero comicbook we see our heroes fighting among them self. Headcase, killed one of the Paradigm's members (Qubit). Also she left Max's friend Armadale dying in a van. Kaidan another member of the Paradigm, summons a kapa spirit to save Qubit's life. She luckly saves Qubit and Armadale survives too, but Headcase is no longer Max's sidekick due to her actions; she is then taking into custody. 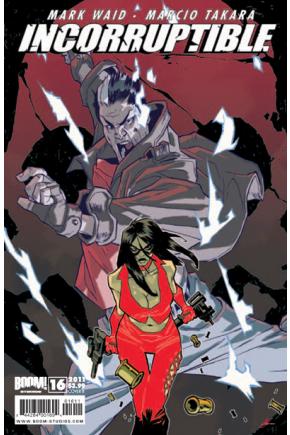 The group, then tries to save the water supply but then the water is turned red, Max realized whose behind all this and tells the group that this is done by a chanting of the two sorcerers. The group goes first into the sorcerers' lair and Max stays behind. You see the way these two fat sorcerers do their chanting is by having sex, Max knows this and prefers to let the group handle this. After a weird way to save the day Max is left without a sidekick and wondering if he can save everyone. As far as Alana Patels story line goes, this issue doesn't show anything other than her talking with Mr. Bellamy and him being ready to make a deal with her.

The art, reminds me of Invincible but with less detail. the backgrounds are almost always drawn very simplistic, yet when it comes to the characters they look very detail. Marcio Takara draws great expressions on the characters; at times it has good storytelling but some of the fight scenes are lacking.

The story was fun but fast, example: the Headcase storyline moved too fast; this was the part of the book that could have been good in focusing on character development for both Max and Headcase. Sure at the end we see Max lamenting the fact that she went evil but it was done in one panel and Headcase was only shown getting convicted. Maybe they will deal with it the next issue but as the issue that dealt with the situation first hand, it could have had more on the subject matter.

Except for that, the issue is quite an enjoyable one, the used of the kapa spirit and the fat kinky sorcerers were some of the key points is the story that were most amusing and interesting, keeping the story refreshing and unique. Mark Waid's characterization is still spot on. the dialog was kept short and simple and over all the book has an easy way to connect to new readers.

Incorruptible is one of Waid's best book out there. is one of those books that play with familiar mythos yet maintain an aura of originality; giving the readers a chance to come back month after month.