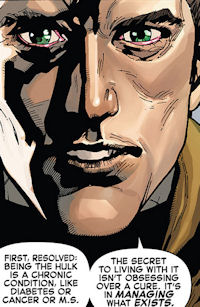 After the critical acclaim Mark Waid’s Daredevil has received, expectations are high going into Indestructible Hulk. That’s usually a recipe for disaster even if the book manages to be good. No worries about that here, though. If this first issue is any indication, indestructible Hulk is going to blow Daredevil away.

What makes the central premise of this Hulk relaunch so strong is that it feels like the genuine progression of the character. Waid sells it really well early on as Bruce Banner lays it out for Maria Hill. He is one of the most brilliant people on the planet, and after years of trying to cure himself of being the Hulk, he’s still the damn Hulk. If you can’t cure an illness, you manage it as best you can. This is where Bruce is now, and if someone is going to help manage the Hulk, S.H.I.E.L.D. is a fairly sensible choice.

Generally, I am not a huge Hulk fan. I’m far from a regular reader of the character. I come and go depending on the writers and the stories. So while I don’t know a lot, I know what I like when it comes to a Hulk book. And what I like is Bruce Banner.

The more apparent thought going into a writer’s take on Banner, the more I will probably be a fan. I think it’s because there are times when writers almost ignore him entirely in favor of the Hulk smashing stuff. That hasn’t been so much of a problem lately, but in the greater history of the Hulk, it has. Thankfully, Waid gives us mostly Banner here and uses the Hulk sparingly. That’s the right formula. Banner is the scary one. He’s where the dramatic tension resides, because hes the ticking bomb, as this issue references more than once. The Hulk is the explosion. Unless you’re Michael Bay, you can’t build stories on nothing but explosions.

The dynamic between Banner and Hill is fun and leaves me hoping she’s not only going to be around for the first issue. There’s an amusing frenemy vibe developing there. Obviously, they can’t trust each other. Hill’s a spy, and Banner proves he’s dangerous intellectually as well as physically. Waid even introduces some mysterious element of blackmail to how Banner gets her cooperation. I’ll be disappointed if Hill doesn;t play a recurring role in this series.

And even though it’s a small role, Waid writes a pretty damn good Mad Thinker. The guy’s really just the “threat of the week” for this issue, but that apparently doesn’t dissuade Waid from writing the hell out of him. It’s nice how he’s trying to mathematically analyze Hulk as they fight. I don’t expect the Mad Thinker to show up again, but I really wouldn’t mind it if he did for a more prolonged showing.

The only thing I am left wanting for in this issue is a better idea of Waid’s take on the Hulk. Hulk portrayals tend to vary far and wide, ranging from a simple-minded and child-like Hulk to one that is reasonably mature and articulate. This one smashes stuff up good, and that’s all I can really tell. I don’t think there’s any danger here that Waid’s take could seriously hurt the book. But having seen some annoying takes on the Hulk in the past, I always worry about it at least a little.

I don’t think Marvel could have chosen a better artist then Leinil Yu. Something about his style fits perfectly with the story. This is largely Hill and Banner sitting together in a diner, but Yu even makes that entertaining to see.

Indestructible Hulk ranks up there with Thor: God of Thunder as one of the stars of Marvel NOW!. Waid doesn’t just hit on a winning concept here. He and Yu nail it in the execution as well. They manage something that’s new but also feels perfectly natural for the character. It’s also a new status quo that allows Banner to play just as much of a role in things as the Hulk, if not more.