On the planet Sparta in the year 3000 C.E. (Common Era) war still wages. The reason for the war is what the planet holds. Geo-Economic blocks wage war for the massive resource deposits of silicates and ores. Both are used to keep Earth the utopia it has become. The GLOMRAT and RETSU are the two corporations battling for control of Sparta's resources. Glomrat has a slight advantage in the fact that their soldiers are machines made to look like humans called AUT's.

In a routine skirmish the AUT Team Leader Tolem is killed. To replace Tolem the boys at the AUT factory back on Earth build a new model called T.L. Model 3.6-195 or Tim. Tim is unlike any other AUT from the get go, unlike other other AUT's the first thing he did upon "waking up" was ask what his name was, not his bar code. He prepares to depart with Hal Windsor (a human) a corporate cog from Glomrat that wants to prove himself on Sparta. He's had one blunder in his past already and even though he's been warned not to go to Sparta, he picks up his family and moves with the hope of finding adventure. 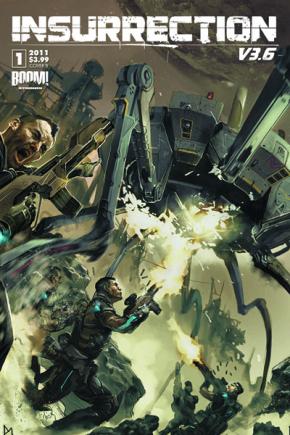 As Tim settles into his new room on Sparta, Hal meets with Director Goss and explains that he is here to take a look into the newly acquired mines from the RETSU. Once there he demands to see the minds even though they are not safe. Hal informs Goss that he has brought the new T.L with him and security is more than acceptable. In the mines Hal is given the nickel tour before he mistakenly sets off a RETSU trap.

Blake Masters and Michael Alan Nelson (28 Days Later, Hexed) come together to present a fairly run of the mill Sci-Fi story. Androids are built to fight in man's wars. Man continues to be greedy destroying itself. Androids get a little frisky towards their human creators and so on. The real problem is that the android in question is pretty bland. Along with that both factions are kind of generic. There is no real personality to anyone, anywhere. That's the hardest part about Sci-fi. It takes time to build the world, rules and characters. Michael Penick ( G.I. Joe Reloaded) does the best he can with what he is given and his art is the only real saving grace in Insurrection. Everything is neat and clean in its presentation. He creates a solid visual landscape that helps draw the reader into the book.

It's hard to judge any comic on a first issue, let alone a Sci-Fi one. There needs to be a rich history to make it work. It also helps if there is emotionally gripping protagonist and supporting characters and right now “Tim” isn't enough. Insurrection V3.6 needs to take it up more than a notch if it wants to make it make in the world of science fiction entertainment. If you're a sucker for Sci-Fi there might be something here for you. If not, there's not a lot in this version 3.6 you'll need.