This is the second half of our interview with Champions Online Executive Producer Shannon “Poz” Posniewski.  To read the first half, click HERE.

PLAYER AFFINITY: You have a new Archetypes system.  Tell me about the Archetypes, and how they differ from Archetypes seen in other Superhero games and the MMO Tank/Mage/Buffer standards.

SHANNON POSNIEWSKI: An Archetype is a pre-defined build for a hero. It specifies which powers they'll receive when they level up, what superstats they'll have, and what role they're best equipped to play. They still retain a lot of customizability. They can choose travel powers, talents, and power Advantages. Overall they are much more streamlined and simpler to play than a free-form character.

Some Archetypes will be rather like standard MMO character types. We did this to provide a baseline for players new to the game. Other Archetypes will be very specialized and niche, perhaps with some special combination of abilities that are tricky or interesting to play. All Archetypes are based on a crime fighter from comic books, so even specialized Archetypes should feel familiar.

PLAYER AFFINITY: The change in monetization comes between the release of City of Heroes: Going Rogue, and DC universe Online.  Did the release/ announcement of those games affect the change to go free-to-play?  In other words, are there enough superhero fans to warrant multiple Superhero MMOs with a monthly subscription?

SHANNON POSNIEWSKI: It didn't really, though I think it works in our favor. We had been considering going free-to-play for quite a while. We discussed different approaches for a while, and once we got all our ducks in a row we announced it. It's a happy accident regarding the timing.

I think there are plenty of superhero fans out there. I think, however, that this is a bit of a red herring. Are there really millions upon millions of fantasy fans out there? There are certainly more superhero movies than fantasy movies. What really matters is do you like the game, and are your buddies playing it. Of course, fans provide a ready-made group of players but I think these games go beyond the fan demographic eventually.

I do think superhero MMOs have a draw that fantasy games do not: they exist in the modern day, in a world much like our own. I think that many people like our games because they relate better to the world. Many players relate to Peter Parker more than they do to an Orc.

Our shift to free-to-play is an acknowledgement that players are beginning to prefer paying as they can rather than having a subscription. A few years ago, the conventional wisdom was that North Americans preferred an all-you-can-eat plan based on subscriptions. They felt nickel and dimed otherwise. Other games were very successful overseas with microtransactions, but few had hit it really big here. I think Farmville was the clarion call that resoundingly proved we were in a new era.

It's mainly in response to this change that we decided to go free-to-play. Subscriptions are still available (and they have special features that non-subscribers cannot get), but we're excited to see the free-to-play crowd come in too. 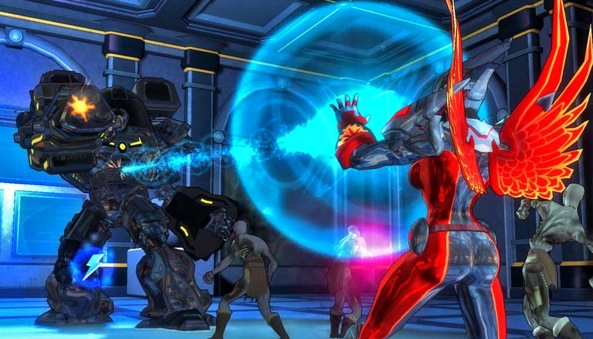 PLAYER AFFINITY: Who can get into the beta at the start?  Will it open up to others after that?

SHANNON POSNIEWSKI: We're running a closed beta now. All current subscribers, lifetime subscribers are invited already. We have also invited people who showed an interest in Champions but did not subscribe. We're considering opening it up more next year

SHANNON POSNIEWSKI: The hope is that free-to-play will give us a greater ability to provide new content and features in Champions. Seasonal events will definitely continue and be free to participate in. General game improvements will also be free for everyone. New content from Adventure Packs and expansions will be free for subscribers but cost a fee for non-subscribers.

SHANNON POSNIEWSKI: A new Adventure Pack called "Revolution" is in the works. The story for this one is pretty cool, I think. You'll see your Nemesis in a whole new light.

PLAYER AFFINITY: Star Trek Online is getting a feature which will let players make their own missions, and Neverwinter will also have a similar feature.  Is anything like that in the works for Champions?

SHANNON POSNIEWSKI: All of the Cryptic games share the same technology. Star Trek and Neverwinter are based on all the things built for Champions, and Champions will borrow back many of the cool features those games build. We've been eyeing a few of their features for Champs, including building missions. But, no promises right now!