The Intrepids #4, is out this week. This series was a slow start (story wise) but has sold well. This book delivers a retro fusion of indie punk comics and weird strange science fiction. It is a "team book" of bionic individuals that join forces to fight evil mad scientists. They are lead by the enigmatic Dante, a character similar to the early Professor Xavier mix between Reed Richards and Victor Von Doom but with a more mysterious background. So far the book has not shown any sings of being really a "group book" since the previous issues were focused more on the character of miss Crow and Dante's backstory. The group has not faced any mortal foe, unless you count killer baboons and a purple cyber bear. But the internal conflict has risen in the minds of the team. Thanks in part to the previous issue when they captured a manbot named Jonah and he told Miss Crow, that they are not the first team Dante created.

The art: The art of the book keeps getting better with every new issue. Everybody is saying that Scott Kowalchuk's art is a mix between Jack Kirby, Darwyn Cooke, Steve Ditko and now you can throw a little bit of Will Eisner as with this issue we see how Kowalchuk integrates the titles into the story, a famous trademark of Will Eisner. The story telling is fantastic, using the right angles to catch the development of the story in a more fascinating way. Still it has some problems on how he presents the flashbacks as you can easily notice how the characters tend to look the same, both in the past and the present. Thankfully the colorist always manages to solved a bit of this problem by delivering a different color palette to the flashbacks. The action is smooth a comes like a second nature in this series. This issue shows a lot of expressions from the characters although Kowalchuk is not that great in delivering expressions, this time around he gets the job done. 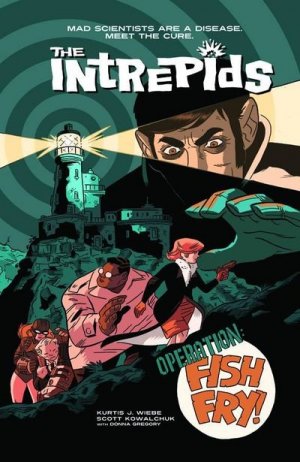 The story: The story lacks a couple of things: portraying this series as team book, preferring to focus on some characters instead. it focus a lot on Crystal Crow but it doesn't deliver anything interesting about her, in fact the other characters seem more interesting and we haven't spent that much time with them. The book needs a real menace, there is no sense of danger coming from the villains in fact some of them are plain ridiculous. I know that the purpose of this book is too throw some crazy ideas out there but at least make it worth it and fun to read, not just some device to give the story some action. Also the book needs more info on the world they live in and what the other characters do. It spends a lot of time concealing things from the readers and revealing them in the background rather than in the main story. When they reveal something is not really that shocking, which begs the question is it really worth it, keeping things from the readers?

This time around the book delivers a true "team book" as we see the team interact well with each other and see how good they are in a mission. This time by saying less it says more. This chapter is simple as the team prepares for a mission, they do the mission and they get their goal: Dr. Koi. Very simple yet it has good characterization and great character development. Also we see how the team reacts to Jonah's comment, we see how a seed of distrust is planted among them. Yet they manage to work well with each other and carry out the mission. Yes, this issue still focused on miss Crow, but it shows more of the team and more of their personalities and it proves to be a team book after all.

Thoughts: Athough it proves to be one of the best issues in the series and finally remembered that it has other characters on the team. I could care less for the cliffhanger. Its finally Dr. Koi! Who? You know the Dr. Doom of the series. The one they should be afraid of but the readers don't know why because they haven't shown why this guy is a real powerful, evil menace. But the ambience of doubt and mistrust gives this book a interesting appeal. Also the book runs too fast, it doesn't feel like a 32 page comic and it isn't because this book has a lot of ads that filled the 32 page book. But if you are looking for great art this week, pick this book up.

Overall Score - 7.0/10
*Good, A solid book overall, might not be for everyone but does have a fan base and they will definitely enjoy. 100% Free of Killer Baboons*